On the morning of Sept. 8, 2020, as the Wasatch Front braced for a catastrophic windstorm, three University of Utah seniors lofted a small scientific instrument from a parking lot near Red Butte Canyon, tied to a balloon, that would ride through the storm and collect data that would help the student-researchers learn from a severe weather event.

The three students are Eric McNamee, James Powell and Andrew Park, all atmospheric sciences majors. All three have been involved in research; Powell has worked with Rocky Mountain Power to predict wildfire risk, and McNamee and Park have worked with the National Weather Service, researching snowfall events and lightning activity, respectively. McNamee is also the director of the Utah Weather Center, a student-run weather forecasting service, where Powell is a forecaster. So when the forecasts of heavy winds took shape, the students saw an opportunity.

“Essentially,” McNamee says, “we wanted to diagnose the wind and temperature profile of a downslope windstorm at the base of the mountains.” Although the National Weather Service routinely launches weather balloons from the Salt Lake City airport, the researchers wanted their instrument to fly near the base of the mountains, where the strongest winds in the storm blew.

For that, they decided to launch at the mouth of Red Butte Canyon, where the balloon would be in some of the strongest airflow. 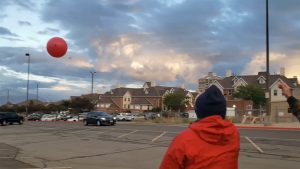 U students launch into the wind a small set of scientific instruments attached to a balloon on the morning of Sept. 8, 2020.

What they launched isn’t what you might think of when you hear “weather balloon.” In contrast to the large balloons and suite of instruments that professional meteorologists release, this instrument was tied to a small balloon and housed in a Styrofoam cup.

Powell says the morning was beautiful, with the sun peeking over the mountains. McNamee says the colorful clouds made for a surreal sunrise.  “The wind was blowing very hard, with gusts that would blow you a few steps back sometimes,” he says. “We even had some snow flurries fall on us before sunrise.”

“Launching in the morning was nice,” Park adds, “because my car A/C is broken and I got to use my heater.”

As they watched the windstorm unfold throughout that Tuesday, the researchers’ meteorological training helped them notice things like standing lenticular clouds—long, linear clouds that ran parallel to the mountain ranges and formed in several lines. These are also called “lee clouds.” McNamee says they form when air that has slid down a mountain face bounces off the ground and lofts up to where it can form a cloud, then sinks back down again.

“In spaces where there are no clouds, air is sinking,” Powell adds. “Where clouds are, air is rising.”

Park says that while many people might think that winds are stronger at higher altitudes, this windstorm featured the highest winds closer to the ground.

Their instrument used 400hz radio communication to transmit temperature and moisture data which gave insight into the stability of the atmosphere. A GPS transmitter allowed the researchers to see how fast the balloon was rising or descending, and also provided horizontal velocity data.

The researchers are still studying the data and comparing it to previous weather events to determine why this event was so powerful. The highest winds they measured, more than 80 mph, were about 1500-2000 feet above the ground at the base of an “inversion” temperature layer indicating air descending rapidly down the Wasatch slopes. Normally the air temperature goes down with elevation, so an inversion is when warm air sits above cool air. 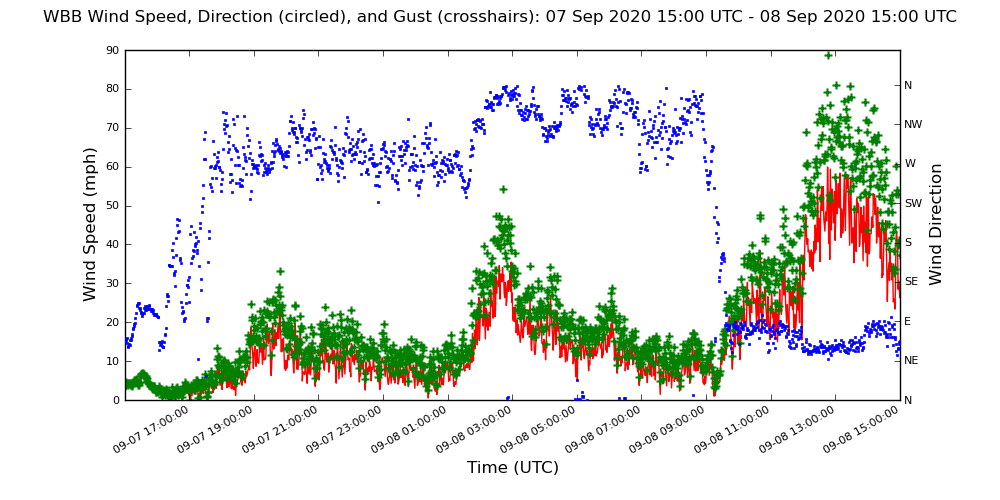 Data captured by the instrument.

The benefits of research

After about 40 minutes the team lost contact with the instrument and it likely landed somewhere (safely, due to its small weight) in the south Salt Lake Valley. But the data it transmitted helps these researchers understand the serious impacts of the windstorm and could potentially help residents know what to expect along the entire Wasatch Front if and when these conditions happen again.

McNamee says that at the time he was focused on getting good data from the experiment. “As the windstorm has passed, though, it’s cool to reflect back on what we did during an event that is rare for the area based on its magnitude and the effects it had on the Wasatch front,” he says.

“The atmospheric sciences department is great at helping students get out and do research,” Powell says. “We are a small department where everyone knows each other and the professors and staff really do care. With their encouragement, we are able to add valuable real-world experience to our resumes making us more prepared to enter the workforce.”

Learn more about the Department of Atmospheric Sciences here.