Branches of the Defense and Interior departments have designated the U’s Department of Geography as a Center of Academic Excellence in Geospatial Sciences, which involves mapping, measuring and simulating geographic locations.

The recognition is prestigious, and might attract more students, create research collaborations and possibly provide internship and job opportunities for students within the two agencies that made the designation: the Pentagon’s National Geospatial-Intelligence Agency and the U.S. Geological Survey. 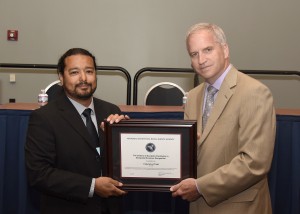 So says Richard Medina, an assistant professor of geography and associate director of his department’s Geospatial Intelligence Certificate Program. Geography Professor George Hepner is the director.

The U’s Department of Geography was among programs at 17 universities to receive the federal Center of Academic Excellence designation. Hepner notes the U is among about a dozen universities that offer both undergraduate and graduate certificates in geospatial intelligence.

Medina says those challenges include things such as tracking terrorists and disease outbreaks, following mass migrations, managing emergencies and disaster response, assessing land use, providing early warning of famine and other disasters, and monitoring and assessing global environmental problems.