HATCH FOUNDATION ANNOUNCES COLLABORATION WITH U

The Orrin G. Hatch Foundation announced a new collaboration with the University of Utah on a center that will provide students and faculty with the opportunity to study and research how best to promote political civility and bipartisan solutions to society’s most pressing problems.

The center will honor Sen. Orrin G. Hatch, who is retiring after a 41-year career in the U.S. Senate. The building will include a replica of Hatch’s office and provide space for meetings, lectures and debates, in addition to research and study space. It also will serve as a repository for Hatch’s extensive collection of papers.

“America is at its best when goodwill and civility are greasing the wheels of our political system,” Hatch said. “We need to come together and tackle our nation’s toughest policy battles by committing to exercise civility in conversation, respect in disagreement and wisdom in collaboration.”

The center will be built at 427 E. South Temple, on what is now a university-owned parking lot east of the Thomas S. Monson Building. The university has agreed to sell the site to the foundation. Ground-breaking is expected to take place in early summer.

U President Ruth V. Watkins said the center will be “an important space where students and the public from across Utah can research and study government, as well as openly discuss public policy and the value of public service.”

“This center has the potential to significantly advance public service and civic leadership for generations to come,” Watkins said.

The Hinckley Institute of Politics and the Kem C. Gardner Policy Institute and other appropriate colleges and departments at the U will participate in programs at the center. 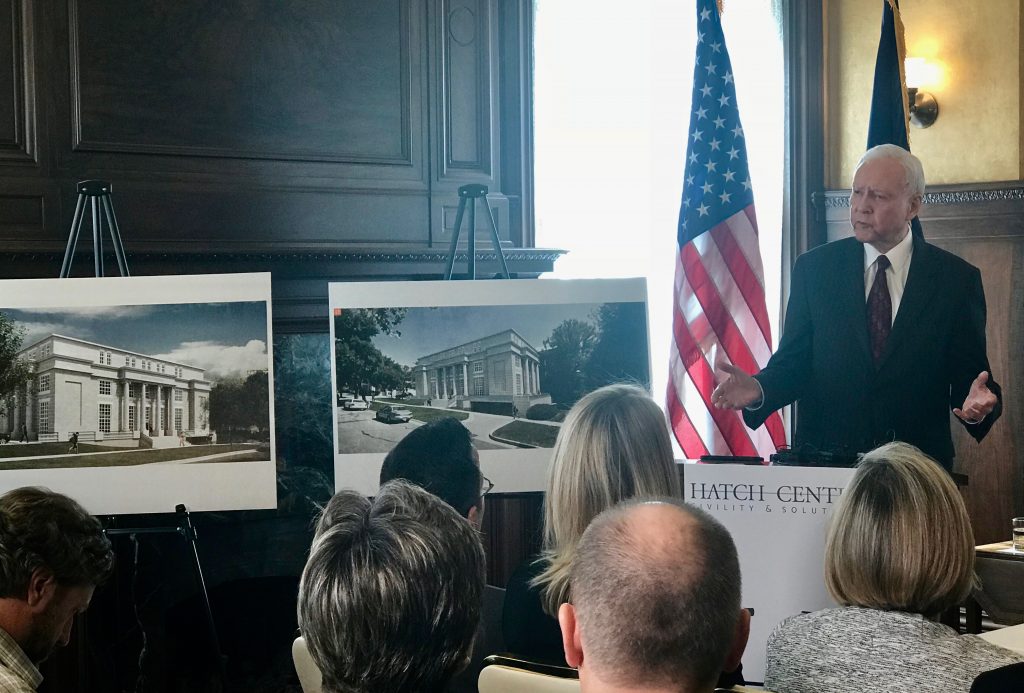 “This rich relationship has benefited students immensely, providing transformative internships in Sen. Hatch’s Utah and Washington, D.C., offices and in his political campaigns,” Perry said. “More than 300 University of Utah students have interned for Sen. Hatch, representing 5 percent of Hinckley interns since 1977, and even more alumni have been hired on as permanent staff.”

Hatch was first elected to the Senate in 1977 and is the longest serving Republican senator in U.S. history. Highlights of his political service include such initiatives as the Balanced Budget Amendment to the Constitution, the Religious Freedom Restoration Act, the Americans with Disabilities Act, and the Utah School Trust Lands Exchange Act. He is chairman of the Senate Committee on Finance and a member (and former chairman) of the Judiciary and Health, Education, Labor and Pensions committees. He also is a member of the Joint Committee on Taxation.

Natalie Gochnour, director of the Kem C. Gardner Policy Institute, said the Hatch Center and the institute will complement each other, bringing together experts in national public policy and Utah economic, demography and public policy.

“Sen. Hatch has served as an ex-officio member of the Gardner Policy Institute’s Advisory Board since its inception in 2015,” Gochnour said. “We enthusiastically support this exciting new opportunity for our community and the University of Utah.”