Nora Abu-Dan and Satin Tashnizi were accomplished and active undergraduates at the University of Utah. They studied hard, got involved and found ways to improve the world around them.

Abu-Dan, a Utah-born Palestinian American who graduated in 2015 with a degree in economics, participated in Students for Justice in Palestine and other causes. Tashnizi, the daughter of Iranian immigrants and a 2017 graduate in political science, worked to bring polling locations to the U so that students could vote on campus for the first time. Still, neither would’ve guessed they’d soon be running a nonprofit or one day collaborate with the university art museum on a groundbreaking exhibition.

But the Trump administration’s controversial “Muslim ban” in 2017 mobilized these young women of Islamic faith to do something. Working with fellow U grad Faeiza Javed, they organized a series of public events encouraging constructive dialogue. 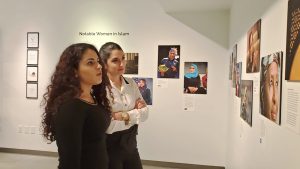 U alums Nora Abu-Dan and Satin Tashnizi collaborated with the Utah Museum of Fine Arts (UMFA) to create an exhibition, “Ummah,” aimed at combating anti-Muslim bias.

“We said, ‘Let’s provide an environment where people can come together, whether they’re Muslim or non-Muslim, and have a candid conversation about it,’” said Abu-Dan. “Not finger-pointing, not yelling at each other, but really getting at the root cause of fear and misunderstanding.”

Inspired by the enthusiastic response, the three women decided to cofound the Emerald Project, a nonpartisan nonprofit dedicated to promoting the understanding of Islam and to bridging the gap between Muslims and non-Muslims by separating Islam, culture and politics. Soon, organizations around the state—from the U and Utah Valley University to the local FBI—were reaching out, asking the Emerald Project to present on and consult about the local Islamic community.

This fall, the Emerald Project’s mission finds broader reach and greater impact here on campus through a new exhibition at the Utah Museum of Fine Arts (UMFA). “Ummah,” a collaborative, interactive installation co-created by the Emerald Project and the UMFA, celebrates Utah’s Muslim people and demystifies the Islamic way of life through images and objects made and contributed by local Muslims. At the center of the gallery is Tashnizi’s own Qu’ran, Islam’s sacred central text.

“Ummah” opened Aug. 15 in the museum’s ACME Lab and is on view through Dec. 15. ACME Lab is an innovative space in the museum’s Emma Eccles Jones Education Center dedicated to community engagement and art experimentation. The exhibition and ACME Lab are made possible, in part, by a generous gift from the JoAnne L. Shrontz Family Foundation and the National Endowment for the Arts.

Abu-Dan and Tashnizi, who now run the Emerald Project, both get emotional talking about what it means for local Muslims to see themselves in a place where they haven’t been represented before, a cornerstone of local cultural life.

“We know that every fourth-grader in Salt Lake City will have a chance to come through this exhibition [through the pARTners program]. We remember when we were in fourth grade when we went on field trips, there wasn’t anything representing Muslims that we could walk through,” says Tashnizi. “It’s a very significant moment for those of us who grew up in front of TVs that said ‘red terror alert,’ and that was attributed to Islam and Muslims. But now young Muslims and non-Muslims get to have an experience of Islam that’s positive. And I think that’s different, and it’s new, and it’s in Utah.”

Abu-Dan, Tashnizi, and other members of the Emerald Project will host a talk and discussion Wednesday, Sept. 4, at 7 p.m. in the UMFA’s Katherine W. and Ezekiel R. Dumke Jr. Auditorium. The public is invited at 6 p.m. for refreshments in the Museum Café and an exhibition preview. Admission is free, but auditorium seating is limited, and guests are encouraged to register for a ticket here to ensure a seat.

Along with Wednesday night’s talk, the museum will host Open Studio, a drop-in art-making program for adults on Wednesday, Nov. 6, at 6 p.m. At 7 that night the documentary film “The Judge,” about the first woman judge appointed to the Middle East’s Shari’a (Islamic law) courts, will screen in the Dumke Auditorium. Admission is free, but guests should also register for tickets.

Iris Moulton, a former UMFA educator who conceived and curated the exhibition, was looking for a way to connect the museum with local Muslims when she crossed paths with the Emerald Project. The UMFA’s expansive collection of global art includes very few objects related to Islam, so collaborating with the Emerald Project and local Muslims “to design and conceptualize the entire space” gave the museum “a chance to talk about Islam and community in a way we haven’t been able to before,” Moulton says.

“To be able to reflect that community back to itself and to people who aren’t members of it and to clear up some Islamaphobia, to clear up some misconceptions, but also to celebrate some of the most exciting things that are going on in this community has been really rewarding,” Moulton says.

Ummah is an Arabic word that refers to the collective people of Islam—a vital concept, say Tashnizi and Abu-Dan. Islam is much more diverse than many non-Muslims think, encompassing people from different countries, backgrounds, ethnicities, languages, identities, cultures and more. “Ummah is a beautiful concept because it unites people past the things that divide them,” Tashnizi says. 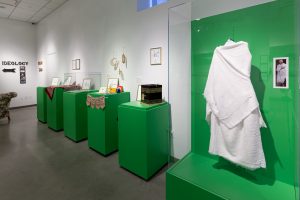 “Ummah,” on view now through Dec. 15 at the UMFA, features images and objects from Islamic life that were made and contributed by local Muslims.

These ideas are presented in the exhibition in five sections, arranged to dispel myths and stereotypes about Islam and to celebrate the diversity and traditions among various Muslim groups in the state. Throughout “Ummah,” practicing Muslims in Utah describe their religious practices, express cultural traits and celebrate what the Islamic religion and Muslim culture means to them. A community wall invites visitors to contribute objects from their own lives that reflect their relationship with Islam.

The exhibition makes a point to separate Islam the religion from cultural practice, a distinction Abu-Dan and Tashnizi say is missing in the Muslim community and in the media.

“There are things that are practiced in a culture that are passed off as Islam, but in fact, they are not,” says Tashnizi. “When you pass this down generation after generation, then you pass down an inherited religion that is not accurate to what the religion is, and this can have a lot of dangerous consequences.”

What does the future hold for the Emerald Project and the passionate, committed young U grads who run it? Tashnizi and Abu-Dan, both of whom have launched their professional careers at Goldman Sachs, dream of building a community center—a physical space for dialogue and outreach—and they’re thinking of ways to expand the project’s reach nationwide, perhaps by engaging “remote ambassadors” who can lead constructive conversations among Muslims and non-Muslims in their own cities.

But for now, they’re excited and hopeful about what the next few months of “Ummah” at the UMFA may bring.

“Being a part of this great country, and aching just as much as everybody else did when 9/11 happened, and seeing the finger still pointed at you, personally, really hurts,” Abu-Dan says.  But I think if somebody can walk away from this, and being a Muslim, can feel, ‘Wow, I’m seeing myself represented, I’m seeing my community represented, and it’s such a beautiful and true way, the way that I know that my religion is,’ that’s all I could ask for.”