In cities, humans replace the natural ground cover with roofs, pavement and other artificial materials that are impervious to water. These surfaces significantly change how the land absorbs and releases energy and cause the urban heat island effect, a phenomenon where developed areas get hotter than nearby rural areas. As climate change pushes many cities towards dangerous temperatures, planners are scrambling to mitigate excessive heat.

One strategy is to replace artificial surfaces with vegetation cover. In water-limited regions such as Utah, a state with one of the lowest annual rainfall rates in the United States, municipalities have to balance the benefit of cooler temperatures with using precious water for irrigation.

A new University of Utah study will make those decisions easier for the semi-arid Salt Lake Valley, the largest metropolitan area in Utah located in the northern part of the state. The researchers used 60 sensors to analyze the microclimate in five locations throughout the valley. They found that neighborhoods dominated by impervious surfaces were warmer and drier than the urban parks—up to 2 degrees warmer in both the daytime and nighttime.

“It’s intuitive—we’ve all stood in a parking lot on a hot summer day, and you feel the heat from the ground. And when you’re standing on a lawn, it’s cooler,” said lead author Carolina Gomez-Navarro, a postdoctoral researcher at the U. “But we need to back up intuition with data to determine the best strategy for our semi-arid cities.” 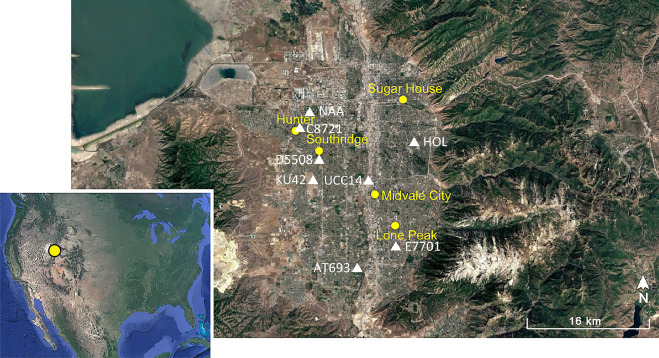 A map of the park and residential sites in the Salt Lake Valley.

Gomez-Navarro and the team measured the temperature and humidity inside five parks and in their adjacent residential areas from June through August in 2016. They also analyzed how the surrounding landscape impacted air temperature. Surprisingly, they found that lawns reduced daytime and nighttime temperatures even more than trees did. While trees provide shade, lawns and turfgrass act like a swamp cooler—water moves through the plant, evaporating from tiny holes in the leaves and cooling the air.

Much of the heat that builds up during the day dissipates at night. The more open the land, the better heat can escape into the atmosphere. An area with many trees acts like a greenhouse, trapping heat close to the ground. The study concluded that a mixture of dispersed trees and grass is the most effective way to cool temperatures in the Salt Lake Valley.

“Understanding how ground cover impacts temperature is crucial for city planners to weigh the benefits and costs of its landscape design,” said Gomez-Navarro. “This land used to be a valley of bushes and bare soil. Any vegetation we add is going to need lots of irrigation and modify the landscape in many ways.”

The paper was published on Oct. 13, 2020, in the journal Agricultural and Forest Meteorology.

Is the grass always greener?

Gomez-Navarro focused on five parks and the adjacent neighborhoods throughout the Salt Lake Valley: Hunter (northwest), Lone Peak (southeast), Midvale City (south-central), Southridge (northwest) and Sugar House (northeast). Each location had 12 sensors that measured temperature and humidity: six within the park and six in the residential areas. Gomez-Navarro analyzed ground cover in a 10-meter diameter around each sensor using satellite images to estimate the percentage of the roofs, pavement, trees or turfgrass. She found that the more turfgrass in a given area, the lower the temperature.

The fisheye images of the sky above a park (right) and a residential area (left) around Lone Peak park have different canopy coverage—the park has a more open sky than in the residential areas. The canopies influence the different ground surface temperatures.

She analyzed canopy cover by taking photos of the sky above each sensor with a fisheye lens. She used software that calculated the area that trees obstructed the sky. She found that the more open the landscape, the hotter the daytime temperature. The more canopy cover, the more shade reduced temperature.

“We didn’t measure human comfort in this study, but we know that the amount of solar radiation on our skin has a big impact on the perceived temperature,” said Gomez-Navarro. “Even if the air temperature is the same, we feel much cooler under the shade of a tree because it blocks some of the radiation.”

Next, Gomez-Navarro will study how different landscapes directly affect how humans feel comfortable in their environment, and how plant cover type affect soil water loss.

“It’s going to keep getting hotter and parks can be a refuge from the heat. But exactly how many degrees can they cool the air? And what should we plant to maximize this cooling?” said co-author Diane Pataki, professor of biology at the U. “It’s getting easier and cheaper to measure temperature all over parks and neighborhoods, and we’re going to need this information to make good decisions about future park designs.”

Eric Pardyjak of the U’s Department of Mechanical Engineering and David Bowling from the U’s School of Biological Sciences were authors of the paper. The research was supported by the NSF EPSCoR cooperative agreement IIA-1208732 and Red Butte Garden at the U.