Since Gary Larson’s “The Far Side” cartoons hit newsstands in 1979, Dale Clayton, an evolutionary parasitologist at the University of Utah and appreciator of the wacky, has loved the comic’s tongue-in-cheek representation of the natural world and the scientists who study it. In “The Far Side” universe, anthropomorphic organisms and suburbanites in cat-eye glasses poke fun at all fields of study, from microbiology to astronomy, with wordplay and dark humor.

When Clayton discovered a new species of feather louse as a graduate student at the University of Chicago in 1989, he knew exactly what to name it.

“This was when ‘The Far Side’ was really hot, and he was still active, and there were cartoons in every office,” says Clayton.” I thought, ‘We often name species after people. Let’s name a louse, of all things, after Gary Larson.’”

So began the strange tale of a type of chewing louse that came to be known as Strigiphilus garylarsoni. 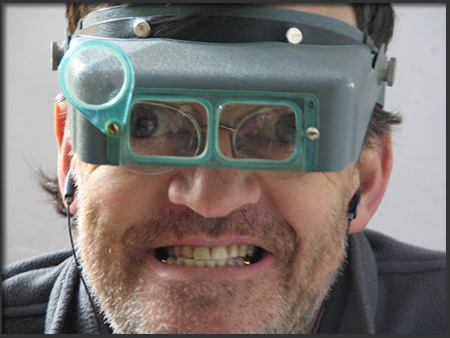 Clayton shares a sense of humor with “The Far Side”‘s Gary Larson. On his website, he captioned this photo as: “The last thing many ectoparasites ever see…”

S. garylarsoni is a parasite, a species of chewing louse that exists only in the feathers of the south African white-faced owl. Its major distinguishing features are stiff, bristly structures on the underside of the head, according to Clayton’s description in the Journal of Medical Entomology. Given Larson’s bizarre sense of humor, Clayton felt confident that he would feel honored to be named for such a creature.

So, he wrote to Larson, asking permission to use his name: 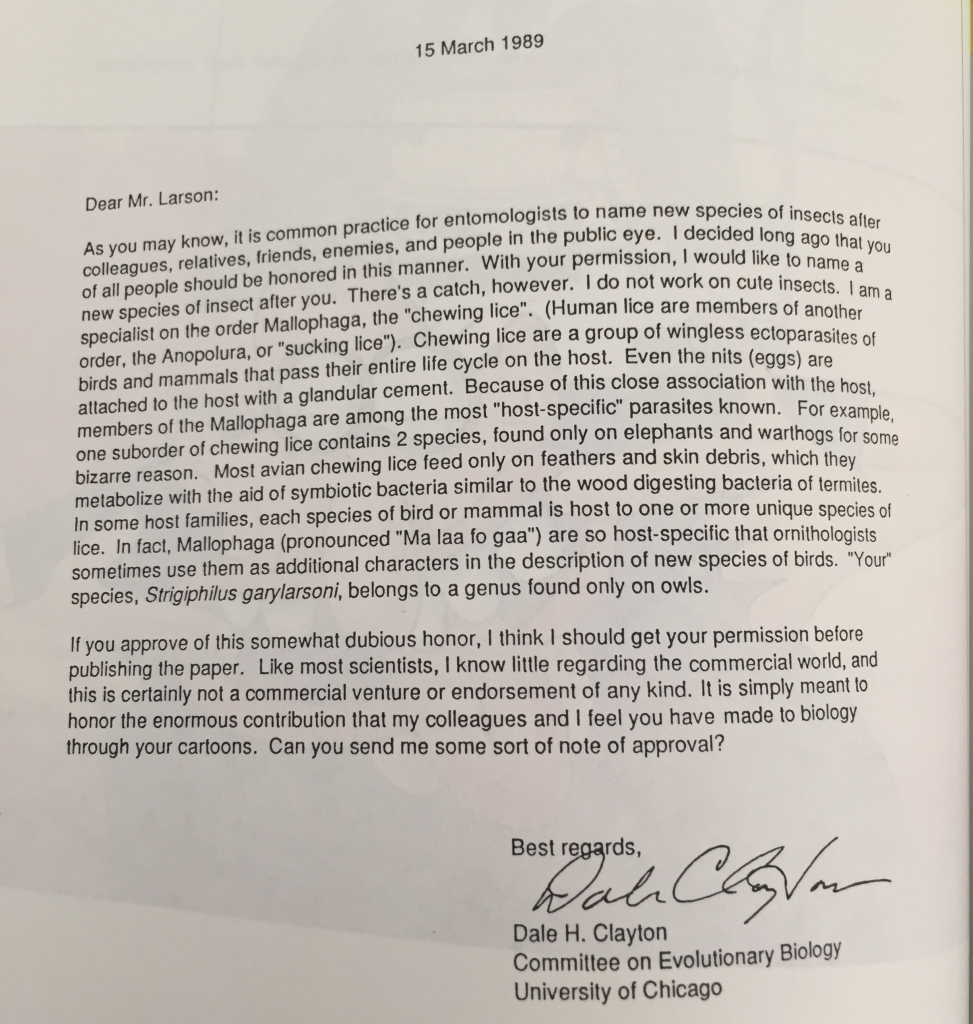 Clayton received a response not from Larson, but his publisher, who was finalizing “The Prehistory of The Far Side: A 10th Anniversary Exhibit.” He said that Larson was thrilled and would like to publish Clayton’s letter, a microscopic image of the louse and a hand-drawn scientific illustration. Clayton obliged, then prepared his own publication describing S. garylarsoni and two other new lice species for the academic world.

In a strange twist of fate, two extraordinary things happened. First, Clayton got scooped; the feather louse was technically first described in “The Prehistory of The Far Side: A 10th Anniversary Exhibit.”

“Because commercial publishing is so much faster than academic publishing, the book actually came out before the paper,” says Clayton, chuckling. “Because he inadvertently published it first, I had to cite this book in the paper. Which is backwards.”

Second, Larson had printed Clayton’s scientific illustration on the end covers of every copy of “The Prehistory of The Far Side.” There are hundreds of tiny louse images on each page. With over 2.5 million copies printed, more than a billion copies of the S. garylarsoni image have been published. S. garylarsoni could be the most replicated scientific illustration in history.

Luckily, the description in “The Far Side” was too vague to be taken seriously by entomologists, and Clayton got credit for the discovery. Larson eventually responded to Clayton’s initial permission letter, and a subsequent gift of a shirt adorned with a louse.

Over the years, Clayton and Larson have maintained a friendly relationship; Larson wrote a blurb for a book on Coevolution that Clayton published last year with Sarah Bush, associate professor in the Department of Biology, and Clayton gave a scientific talk to Larson’s publishing staff. 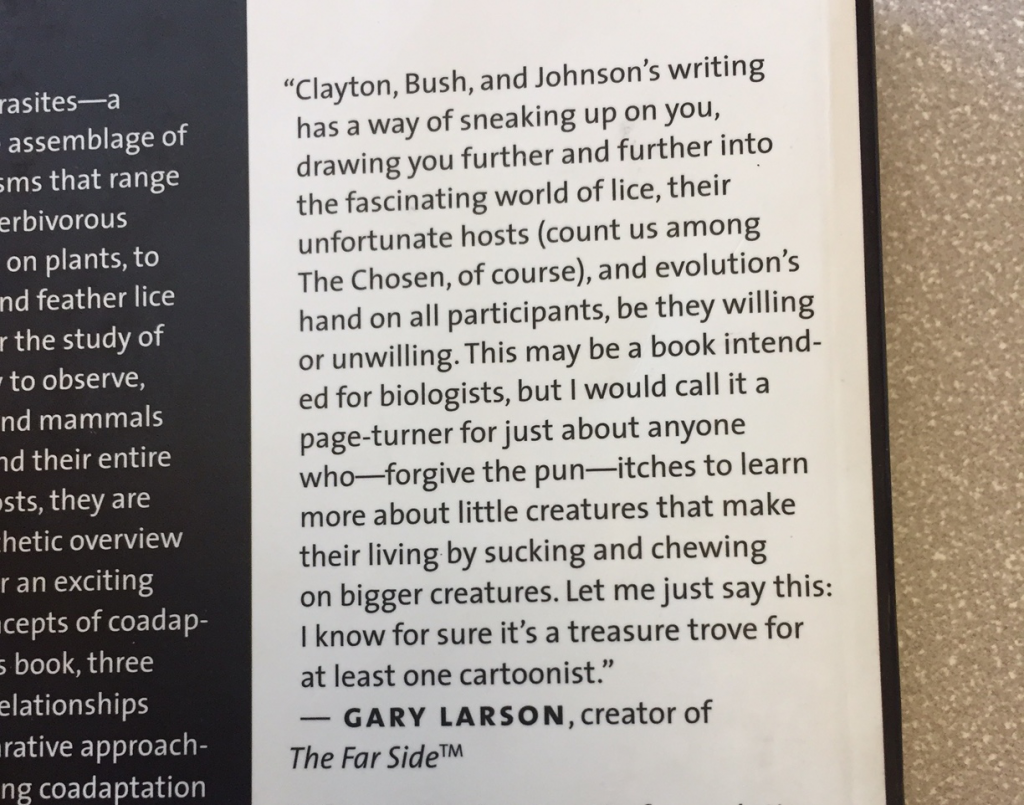 Although Larson has retired, Clayton still respects the reach that “The Far Side” has had in inserting science into the public consciousness. For example, Clayton recalls doing field work at a tiny research station in the highlands of Papua New Guinea, and someone had tacked up a “Far Side” cartoon in the latrine.

“He’s way more influential than main stream scientists are in terms of circulation,” Clayton muses. “He captured the fancy of a whole generation of students, and among other things, helped focus them on natural history and evolutionary biology in a humorous way. The best way to teach people is to be funny, right? It gets people’s attention.” 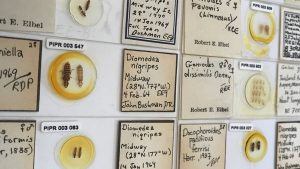