‘THE ETHICS OF SUICIDE: HISTORICAL SOURCES’

In a cooperative venture with the Oxford University Press, the Marriott Library will host the full digital archive of “Ethics of Suicide,” a searchable collection of historical and current writings about suicide.
Janelle Hanson

Debates over the ethics of suicide have occurred for centuries, often reflecting political and religious differences around the world. Some view suicide as morally wrong, while others believe it’s a matter of basic human right, some think it’s primarily a private matter and others consider it a major social concern. No matter the opinion, the role a person plays in ending his or her own life creates controversies that many will never agree on.

Margaret Pabst Battin, distinguished professor of philosophy and medical ethics at the University of Utah has spent almost 40 years researching, collecting and organizing 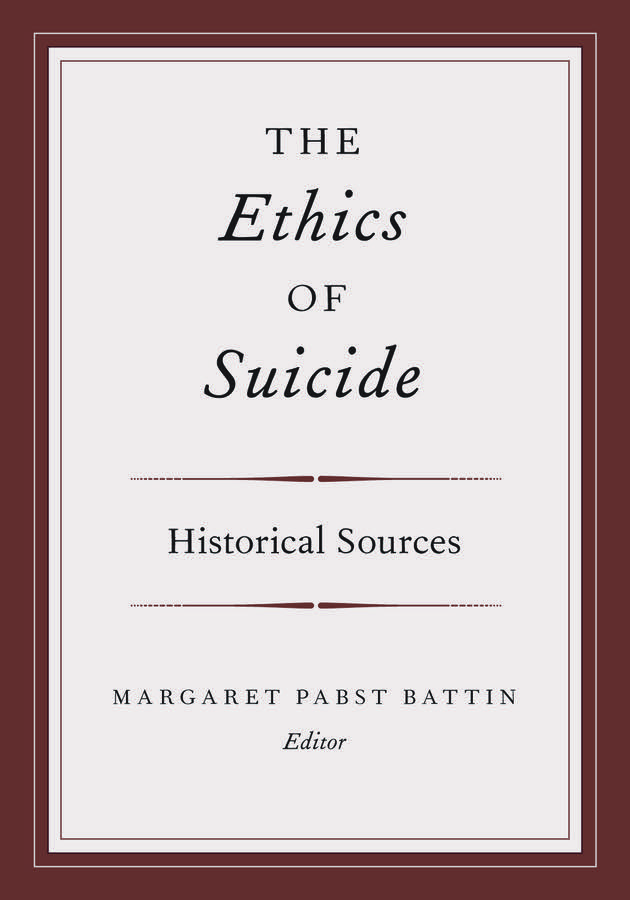 historical  sources on suicide, examining every side of these issues. Her new book, “The Ethics of Suicide: Historical Sources,” published by the Oxford University Press with an accompanying digital archive hosted by the University of Utah’s J. Willard Marriott Library, provides a diverse range of thinking about suicide throughout history, representing a full range of cultures and traditions.

“While most of what we label ‘suicide’ is clearly tragic, controversies include those over physician-assisted suicide, jihad, suicides of social protest, suicides of military and guerilla tactics, suicides of honor, suicides in the face of old age, self-sacrifice, martyrdom, suicide bombing, self-immolation, self-starvation in religious ritual and many other issues,” said Battin. “This collection doesn’t take sides in these controversies, rather, it serves to expand the debate by showing the complicated and multidimensional sides of the issue.”

“The full digital archive, accessed by anyone or through QR codes embedded in the book, includes complete excerpts, links (where possible) to the primary sources and local library catalog records,” said Allyson Mower, U associate librarian who helped spearhead the project. “Readers can browse the archive by author, time period, keyword, intellectual tradition, geographic region or search any term or phrase they like.”

Readers are encouraged to interact with the archive and comment on the selections, submit corrections and suggest new material to be considered for inclusion.

“This project is an unprecedented cooperative venture between a university library and a major university press, and it shows how the world of scholarship can benefit when scholars, librarians and publishers work together,” said Rick Anderson, associate dean for collections and scholarly communication at the J. Willard Marriott Library. “The ‘Ethics of Suicide’ project shifts the paradigm of book publishing in a way that is tremendously exciting.”

Battin has been teaching and studying end of life issues since she first arrived at the U in 1975. She is affiliated with suicide-prevention organizations and also with organizations supporting aid-in-dying, or Death with Dignity legislation. In 2008 her academic work became personal when her husband Brooke Hopkins, also a U professor, was rendered quadriplegic in a double bicycle accident and chose, nearly five years later, to discontinue his ventilator. Battin continues to give talks around the country involving her ironic situation. In her 2013 TEDMED talk, she discusses her husband’s experience and contemporary choices about dying.

An event to showcase “The Ethics of Suicide: Historical Sources” and the digital archive will be held Monday, Oct. 5, noon–2 p.m. in the Gould Auditorium of the Marriott Library. Rick Anderson and Allyson Mower of Marriott Library, editor Peter Ohlin from Oxford University Press will join Battin in a discussion and technical demonstration of the print book and digital archive. The event will include lunch and a book signing.

About
Margaret Pabst Battin is distinguished professor of philosophy and medical ethics at the University of Utah. She has authored, co-authored, edited or co-edited more than twenty books, including “Drugs and Justice” and “The Patient as Victim and Vector: Ethics and Infectious Disease.” She has worked on end-of-life issues throughout her academic career and has published fiction, articles and essays in two collections, “The Least Worst Death” and “Ending Life.” Her current projects include a book on large-scale reproductive problems of the globe, suicide in old age and work that examines assumptions in urban design.