The complete cast, including visiting cast with Broadway credentials and returning local actors, has been announced for Pioneer Theatre Company's concert production of “Dirty Rotten Scoundrels.”
University of Utah

The complete cast, including visiting cast with Broadway credentials and returning local actors, has been announced for Pioneer Theatre Company's (PTC) concert production of “Dirty Rotten Scoundrels.” “Dirty Rotten Scoundrels” is based on the wildly popular 1988 MGM comedy that was a hit film starring Steve Martin and Michael Caine. The concert-style production runs just three performances, over Oct. 18 and 19, 2019, and is an add-on to PTC's 2019-2020 season.

Sophisticated, suave with a good dash of mischief, the comedy features a delightfully jazzy score by Tony and Grammy winner David Yazbek (“The Band's Visit,” “The Full Monty”) and was nominated for 11 Tony Awards. 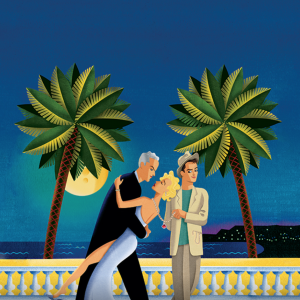 Barrett as Lawrence and Hydzik as Freddy make up the conniving, competing duo. Barrett starred as the Phantom in “Phantom - The Las Vegas Spectacular” and has been in many Broadway productions, including “Chicago,” “Annie Get Your Gun,” “West Side Story” and “Grand Hotel.” This is Barrett's PTC debut. Hydzik returns to PTC from 2017's Concert Production of “Chess,” coming to Salt Lake City straight from Broadway's “The Cher Show.” Additional Broadway shows include “Grease,” “Side Show,” “West Side Story” and “It Shoulda Been You.” Playing their latest mark, Christine Colgate, is Fahrner in her PTC debut after appearing in Broadway's “Wicked” as Glinda.

Joining the principals are equity actors David Elder as Andre Thibault, Larry's bodyguard and confidante who falls in love with Muriel Eubanks, another of the swindler's marks, played by Elizabeth Ward Land. Talya Groves plays Jolene Oakes, an Oklahoman out to marry a prince.

Costumes will be designed by Brenda Vanderwiel, who designed 2018's “Sweeney Todd: The Demon Barber of Fleet Street” as well as many previous PTC shows. Mike Gillam returns to PTC as lighting designer and sound design is by Allan Branson.

PTC Artistic Director Karen Azenberg will direct and choreograph as she has for all of PTC's Concert Productions.

"These are not full productions—they’re a different kind of theatrical experience," Azenberg notes when explaining the concert production experience. "But you will see the whole show, both the script and the score. There will be some costuming and dance numbers and you will see the orchestra band—they’re on stage for our concerts!"

'Dirty Rotten Scoundrels' at a glance