The summer edition of Continuum is hot off the presses. Check out the in-depth features on the University of Utah’s new president, the three-decade career of Athletics Director Chris Hill, how to talk to kids about race and more. 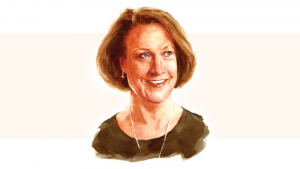 Knows what she wants to do.

When Ruth Watkins was a teenager, she worked as a lifeguard and swim instructor at the Elkader city pool. It was here that she learned a lesson that would shape her outlook for years to come.

Most of the instructors chose to shout directions from the edge of the pool, but not Watkins. If you really want to make a difference, she realized, you have to get in the water and work alongside the swimmers.

Sometimes it was early morning, freezing cold, and the last thing she wanted to do was get in that pool. “But I could see that if I was actually going to be effective at all, I had to be in there with the kids,” she explains. “You make things happen by being part of it. If you want to do something, if you want to make something happen, get in there, work hard, and get other people mobilized around you.”

It was a lesson that surfaced everywhere in Elkader, Iowa, her small, Midwestern hometown (pop. 1,200). Join in and work hard. Mobilize support. Capitalize on the power of the collective effort to make things happen.

Watkins, who officially became the 16th president of the University of Utah on April 2 and will be inaugurated this fall, now has the biggest stage yet in her academic career to act on that lesson. She succeeds David W. Pershing, who is rejoining the faculty after a six-year presidency notable for promotion of engaged student experiences and donor support that made possible an impressive array of expansion and renovation projects across campus.

CHRIS HILL CALLS IT A GAME 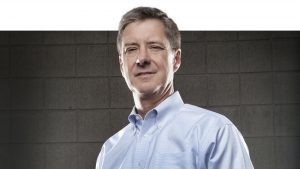 It’s been an epic three decades for Chris Hill, the nation’s longest-tenured athletic director at a single university in NCAA history. Just 37 years old when he stepped into the job in 1987, Hill MEd’74 PhD’82 leaves an impressive legacy of accomplishments, perhaps chief among them Utah’s move into the power five in 2011 as a member of the Pac-12 Conference. Before Hill officially hung up his gloves this May, Continuum had a chance to ask him to reflect on his time as Utah athletic director (AD) and to share what comes next.

HOW TO TALK TO KIDS ABOUT RACE 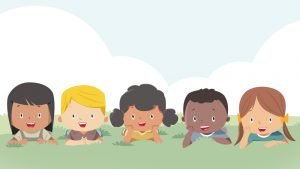 Although children don’t come with instruction manuals, there are, thankfully, an unlimited number of books and online resources to help parents navigate the ins and outs of parenting. Many popular resources are focused on topics such as sleep training, nap lengths, feeding, discipline, and how to handle a 2-year-old’s blazing tantrum. But what about instructions for raising socially conscious children? How do you talk to a 5-year-old about skin color, diversity, or equity? Karen Tao, assistant professor in the Department of Educational Psychology at the U, can help.

“Kids are complex thinkers, and they are really observant at a very young age,” says Tao. “They are watching adults and other kids, trying to make sense of how to operate and navigate their own interactions. For really young children, they’re looking at what’s right and wrong and what’s fair and not fair. It’s important to provide a space for them to have open conversations about these matters.”

Tao studies how children talk about and understand race and their other social identities. She has collaborated with elementary school teachers, students, and parents in the Salt Lake School District to implement a classroom-based program focused on topics such as race and gender. She also conducts research on how parents and kids discuss these issues. Tao stresses the importance of starting conversations about diversity early, since children as young as 2 years old are beginning to articulate their ideas about difference and developing judgments on what these differences might mean.

“Kids are hearing a lot of misinformation through media, books, and playground interactions, so it’s essential to ask questions and engage with them about these topics,” Tao says. “These conversations can build empathy, compassion, and kindness.”

HANG UP AND DRIVE 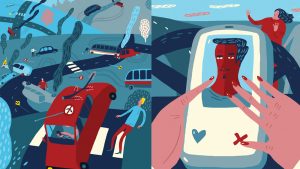 The U’s national expert lays out the dangers of driving under the influence (of cellphones).

It goes without saying that David L. Strayer never uses a cell phone while driving. Not even a hands-free one. And you won’t find him talking to Siri or a newer car’s voice-command center to navigate the best route, not even at stop lights.

As a cognitive neuroscientist, he’s been researching distracted driving for nearly two decades at the University of Utah’s Applied Cognition Lab. During that time, study participants have driven enough miles in a simulator and on Salt Lake City streets to go around the world 15 times while researchers have tracked their eye movements, response times, and brain activity. The takeaway: “Humans are really bad at multitasking,” Strayer told Continuum. “We think that we’re good at it, but in fact we’re not. It’s causing injuries and fatalities on the roadway all the time.”

National estimates suggest roughly 20,000 people die each year in distracted-driving crashes. That’s equivalent, Strayer noted, to the U’s undergraduate class. “We’re killing people because we’re not taking driving as seriously as we should.”

When Strayer talks, we should listen. He’s widely seen as the country’s leading authority on distracted driving. His work has been named one of the top 100 science stories for two years, and he’s given countless interviews and presentations around the world. More importantly, his work is motivating safer driving policies. Nearly all states ban texting while driving, and most have outlawed all cell phone use by new drivers.

Since the late 1990s, Strayer and his colleagues have built a case against talking and driving, texting and driving, and, most recently, against the ways vehicles have become extensions of our smartphones. New cars are built with software that connects to smartphones, along with built-in infotainment systems that enable calling, texting, and using apps. 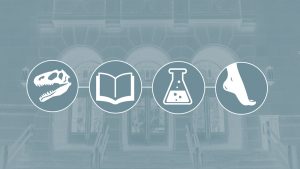 What campus building has been home to bones, books, beakers, and bare feet? (not necessarily in that order)

In 1933, the Public Works Administration approved an expenditure of $550,000 for the University of Utah’s first campus library. Two years later, as the Great Depression was waning, the George Thomas Library, named in honor of the university president, opened. Designed in a Neoclassical tradition, the structure was among the last built on what became known as Presidents Circle. Decades later, in 1978, it was named to the National Register of Historic Places. During its 83-year life, the building has housed not only the campus library but also the Utah Museum of Natural History, Tanner Dance, and now, the spectacular Gary and Ann Crocker Science Center, a world-class science education and research facility.