For the first time in history, the U held a study abroad course in Cuba, where students learned about a changing country at a time when the relationship between the U.S. and Cuba has started to warm.
j.hanson

Wilenys Lastre braced for her mother’s reaction when she told her family she’d decided to head to Cuba as part of the University of Utah’s first-ever study abroad program in the country.

Lastre, a U student majoring in International Studies and Spanish, received an incredulous response about her plans to visit Cuba last fall, a place perceived by many Americans to have limited freedoms after years of tight control by Fidel Castro’s regime.

“Who goes to Cuba?” Lastre recalled her mother saying, before she was peppered with questions about safety and whether Americans could even cross the border into a country long known for having a hostile relationship with the U.S.

Nonetheless, Lastre packed her bags and boarded a plane for Havana along with other students and faculty members from the U for a one week intensive course titled “Cuba: Community, Complexity and Change.” 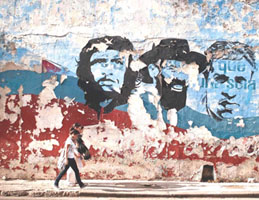 And there, she found a country far different than her initial expectations.

For those on the trip, seeing Cuba for themselves erased misconceptions about a country many students expected might be frozen in time and cool to visitors from the U.S.

“I thought Cubans would want to distance themselves with anything having to do with the United States. Instead, they wanted to tell us what it was like to be Cuban,” Lastre recounted at a recent panel at the Hinckley Institute about the experience.

Lastre, along with Gina Russo, co-instructor of the course and assistant director of the Bennion Center, Claire Gorton, a graduate student in the Master of Public Administration program and Claudio Holzner, the U’s associate director for the Center for Latin American Studies, described positive experiences in learning more about the country as it moves toward change.

Students learned from professors from the University of Havana on the trip, as well as U professors along to facilitate the experience of a country on the verge of embracing a free market economy.

The trip was a milestone for the U, organized as a partnership between the Bennion Center, Master of Public Administration program, Department of Political Science and Latin American Studies program. Over seven days, students explored Cuba’s history and gained valuable cultural, social and economic perspectives —issues that have come into the spotlight on the world stage recently, as the country ponders its post-Castro future and its relationship with the U.S. continues to warm.

The U was unique in bringing students to Cuba, said Russo, who noted that it took careful planning to arrange securing licenses to travel to Cuba to hold the course. The course helped to shape students views and also brought in valuable educational components of learning about a country with an intense focus on community effort, added Holzner.

“There is this feeling in Cuba, this sense among people that they’re in this together,” said Holzner. “In the U.S., there is a sense of ‘us versus them.’ In Cuba when talking about an uncertain future, there is a collective ‘we.’ ‘We have to find a solution.’ There is a sense that people are one society.” 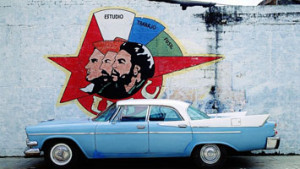 Melissa Hall, MPA program manager and co-instructor for the course, said the program brought the U a unique opportunity for students to explore, discuss and analyze health care policy, education, community development and housing and infrastructure models under a different governance structure. The U will offer the academic learning abroad course again in the fall of 2015.

Besides starting a learning abroad program in Cuba, University of Utah Continuing Education is also offering a new opportunity to travel to the country at the end of the month. Al Campbell, U professor emeritus in economics, is leading the trip, which includes stops at several cultural landmarks and offers participants to stay with a Cuban family at a bed and breakfast one day.

For more on the U’s recent travels to Cuba:

– Click here to listen to the Hinckley forum on the trip.

– For more information about future trips to Cuba through University of Utah’s Continuing Education, click here.

– For students who want to learn more about studying abroad in future programs to Cuba, visit learningabroad.utah.edu.