Opportunity at Zayed University is one of many collaborations between the U and the school in the United Arab Emirates since partnership began in 2006.
Janelle Hanson

What’s it like to be a University of Utah student selected to be flown halfway around the world to teach other students?

Two students from the U’s Master of Public Policy program, Emily Strong and Eric Johnson, recently had that experience. The two received an all-expenses-paid trip to the United Arab Emirates to showcase their research at the Graduate Research Conference in Abu Dhabi’s Zayed University earlier this spring. Strong’s research focuses on elections in Scotland and the political capacities created and exercised by Scotland’s relatively new Electoral Management Board. Johnson’s research focuses on hospital readmissions for pneumonia patients in Intermountain Healthcare facilities.

Zayed University began a collaboration with the University of Utah in 2006, when former dean of the College of Social and Behavioral Sciences (and current professor of political science) Steve Ott assisted with establishing an executive Masters of Public Administration program in the UAE. University of Utah faculty have traveled to the country annually to teach public administration courses since the program’s creation. 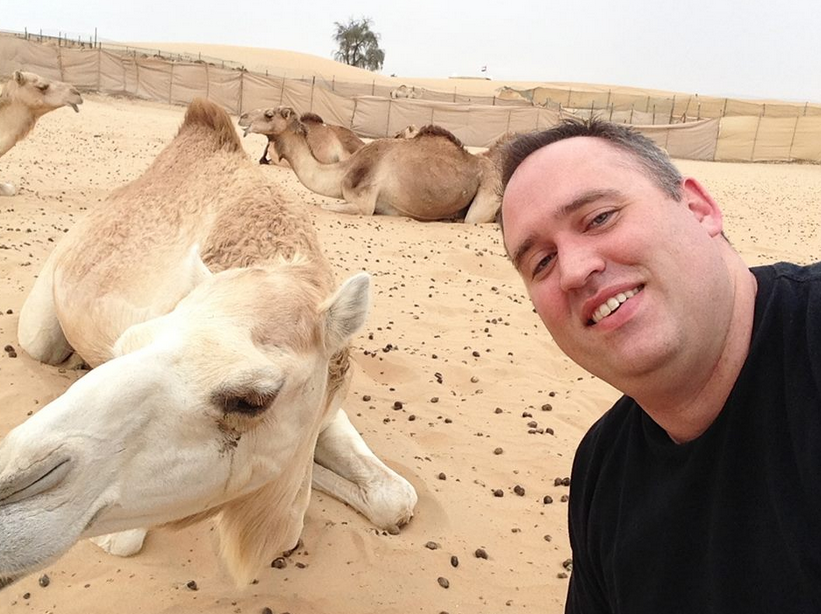 Strong and Johnson were selected from a broad group of candidates from around the world after Zayed University put out a call for research submissions from universities throughout Europe and the U.S. They recently spoke to @TheU about their experiences in a Q&A:

Q: What made you interested in going to Abu Dhabi?  How did the call for research submissions tie-in to what you’re currently doing in school?

Strong: When my Masters of Public Policy program advisor emailed me about the conference, the subject of her email was “Would you be interested in presenting your research in Abu Dhabi?” How could I pass up such an opportunity?

My research involved evaluating the administration of the Scottish Independence Referendum (undertaken by the rather new Electoral Management Board for Scotland) and involved a lot of aspects of capacity development. This is work that I have been doing for the last two years, so the call for research submissions tied in perfectly with what I was doing for the MPP program.

Johnson: The call for submissions was kind-of a surprise.  Dr. Ott had requested a few examples of quality research and my paper was listed among several that may have fit the bill.  The conference was a bit of a catch-all, covering several disciplines and I felt that my research would be of interest.  Plus, who can pass up the chance to travel somewhere else in the world and the experiences that go with international travel?

Q: Tell us about your experience over there. What did you do? Who did you meet? How did it change your perspective of the world?

Strong: Soon after arriving, we met other students who were selected to present at the conference. They were from the U.S., U.K., Ireland and Switzerland. We also met and networked with local UAE students studying public administration as well as social and economic policies in the UAE. I had the pleasure of meeting many women in particular with passion for public administration and education; women with enormous talent and potential for governing. I had the very special honor of presenting my research the day after arriving from a 13-hour flight. When I presented I realized how odd I must have looked (American presenting on Scotland in UAE).

After the conference sessions ended each day, we explored Abu Dhabi. We even went on a desert safari one evening, which included meeting some camels and enjoying aspects of Bedouin culture (even if they were a bit commercialized). We visited a mall and a couple souks (markets), the beach and the Sheik Zayad Grand Mosque.

On our last night, we and the other invited students had dinner with a couple of UAE students. We talked mostly about Emirati food, but we also were able to learn about issues in public administration, public policy, history, and every day life in the UAE.

Before I left for Abu Dhabi, I didn’t fully grasp the extent to which the UAE is investing in education. When I arrived, this conference made it clear that the UAE is serious about diversifying an economy that has to rely less on oil revenue and more on research, development and education in a variety of fields.

Johnson: We met several other graduate students from around the world.  There were 300 presentations at the conference— 285 were by Emerati Nationals and 15 were by international graduate students.  I was impressed by all of the research that was happening, but was even more impressed by the UAE’s commitment to diversify what they are supporting (they understand that the oil that has contributed to their great wealth will eventually run out).

I can only imagine what the U.S. would be like if our federal government had the same motivation to invest in students as the UAE’s federal government does.  In the time when the conference wasn’t happening, I tried to sneak away and get a feel for the local area.  Abu Dhabi was a very modern city with obvious wealth – things that I had been told about but don’t think I was fully prepared for.  We were also able to sneak away for a desert safari where we were able to meet camels and get a bit of tourist-y exposure to very traditional culture.  I was also able to meet several locals and was impressed by the dedication that the local graduate students had to their education, particularly the women, who vastly outnumbered the men.

Q: What do you hope the lasting impression you left with students will be?

Strong: Aside from small (but still meaningful) cultural exchanges, I hope the UAE students we presented with and interacted with became aware of the strong international interest in not only improving research but research collaboration as well. Many of the projects I saw had significance not only in the UAE, but in other parts of the world as well (I recall one paper in particular that focused on polygamy and policies in Shariah law. It got me thinking of this issue in a comparative sense).

Johnson: I would hope that the lasting impression I left with other students would be that of the quality research that is happening at the University of Utah.  There were so many different topics addressed in this conference, but the majorities were of a hard sciences/technical (chemistry, engineering, etc.) nature. There is so much room for quality social science research and I think we only saw a brief glimpse of what is possible.   Hopefully, others around the world will see that we’re doing quality social science as well as medical research in Utah and someone will take note and be interested in these fields in the UAE.

Q: What was the most memorable part of the experience for you?

Strong: The Sheik Zayad Grand Mosque in particular was a favorite of mine that impacted my perspective of the world. It has many aspects of a traditional mosque plus some modern flair (and it was my first visit to a mosque!).  It was the first time I wore a hijab and the first time I had heard a call to prayer. It was unforgettable.

Johnson: Other than the hours in an airplane to get there and back, I would say it was the culture of the people themselves.  The city looked very similar to other modern cities in the world, but for someone who has spent most of their life in Utah, seeing a large number of women in traditional Islamic clothing as well as the men in traditional clothing was something that I found interesting.  In Utah, I’m part of the majority culture, but over there, I was definitely not in the majority population and it was refreshing cultural perspective.

Q: What surprised you about Abu Dhabi from the initial impressions you had before leaving the U.S.?

Strong: The general blend of modern and traditional was so surprising to me. I remember one day after the conference was over going for a swim and I realized how odd it was to see women in bikinis next to women in abayas walking along the beachfront. More generally, though, Abu Dhabi is a fascinating city! I think if more people spent time in the UAE, they would realize that there are many parts of the Middle East that are safe and extremely hospitable to foreign guests.

Johnson: The vast wealth.  I saw more luxury vehicles than I think I’ve ever seen in one place in the United States.  I was told that there was wealth, but wasn’t prepared for how much there really was.  Also, I was amazed how clean the city was, as well as how few police officers were in the city – I believe that I only saw one police car the entire trip (lots of private security though).

To learn more about the program at Zayed University and its collaboration with the University of Utah, click here.

Melinda Rogers is a communications specialist at University Marketing and Communications. Got a story idea for her? Email: melinda.rogers@utah.edu.