What do University of Utah theatre students do in the wake of canceled and postponed performances amidst a call for social distancing during the COVID-19 pandemic? They brush up on their Shakespeare through video conference calls.

Self-Isolation Shakespeare is a collaborative, student-led effort to read through Shakespeare’s canon on Zoom three times a week, with an open invitation for the community to watch actors of all levels participate. The talent range includes theatre students, department faculty with impressive resumes and even professionals working outside of the university that come together to perform these pieces while socially isolating. All the readings are recorded for YouTube and the shows vary among Shakespeare’s tragedies, comedies and histories to make each genre available to their growing audience.

Connor Johnson, a junior in the Department of Theatre’s Actor Training Program, was inspired to start Self-Isolation Shakespeare after viewing a similar project that the department’s professor Sarah Shippobotham shared with his class during the early rise in global quarantining. “The Show Must Go Online” created by Robert Myles are weekly readings on Zoom of the complete plays of Shakespeare by a global cast, in the order they were believed to have been written. Johnson thought there was no reason why the students of the University of Utah couldn’t undertake a similar project, and through the support of fellow students and department faculty, he was able to create a social media presence for the performances so that anyone in the theatre community could access the series.

“I realized the other thing this could be is a great opportunity for students to act alongside professionals or professors,” said Johnson. “People who students can’t always easily work with just because of the nature of professional productions.”

The professional theatre faculty of the University of Utah has already participated alongside their students in several show readings, including Robert Scott Smith who played Prospero in “The Tempest,” Alexandra Harbold who played Mark Antony in “Julius Caesar” and Shippobotham who played Richard III in “Richard III.” Johnson has also seen a mix of outside interest in the project, including actors with working credits from local professional theatres, New York City, the West End of London and the Globe Theater.

“People have said that it was actually great to be able to ‘look over my script last night’ or ‘to prepare for this role the other day, because I was thinking about something other than the news.’ They really latched onto the project, and have really given their thought and time and creativity, which has been wonderful to watch.”

While this series helps to bring the University of Utah theatre community closer during this time, it’s also an opportunity for those involved to broaden their familiarity with a genre of classic works that are continuously produced in the modern entertainment industry in various forms.

“There’s something about Shakespeare that is endlessly entertaining and brings endless variety in ways that most other plays don’t,” said Johnson, who believes that knowledge of this material can be generally useful as a theatre student. “Somehow his plays have managed to maintain interest for hundreds of years, and I think in a more pragmatic sense, for any actor that’s going out into the acting world, Shakespeare is a huge percentage of work that you might get. Even if you don’t want to be a classical actor, every regional company does Shakespeare once a season or once every two seasons.” 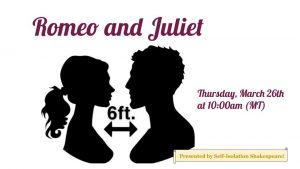 In addition to practicing classical theatre, this series is also a practice session in performing for digital cameras, microphones and the general process that it takes to produce a successful piece of live web content.

“It’s freeing in some ways that you can do things with your voice that you can’t really do on stage,” said Johnson, describing the new acting possibilities he’s observed that performing scenes via Zoom can spark. “It picks up much more subtlety than you’re allowed to have when you’re on stage in a big auditorium. It’s also really fun to see other people doing that, and picking up on that, and it kind of adds this new layer of possibility and creativity.”

Johnson gives credit to an entire team of peers that have volunteered time to shape the current state of the production, including Kiersten Farley as the designated “stage-manager” for the productions, Lexie Thomsen and Liam Johnson as the social media managers and Jessica Graham as an assistant producer.

“I think that something this project made me realize is that we’re all kind of in this together,” said Johnson, reflecting on the support that has been felt by the theatre community for the project so far. “People have said that it was actually great to be able to ‘look over my script last night’ or ‘to prepare for this role the other day, because I was thinking about something other than the news.’ They really latched onto the project, and have really given their thought and time and creativity, which has been wonderful to watch.”