Certain strains of bacteria have been shown to kill deadly parasites and invite investigation for human applications. But parasites that carry deadly diseases like African sleeping sickness aren’t welcome in labs (for obvious reasons), where these investigations take place. That’s when scientists seek out less dangerous relatives of these parasites that are nevertheless evolutionarily close to the parasites that cause human disease.

Enter the European firebug. It turns out that the insect carries a parasite called Leptomonas but also carries a bacteria that defends them from it. What can a biologist learn about this secret weapon in firebugs that keeps them safe from parasite growth?

Well, first off you have to locate firebugs to study the phenomenon. 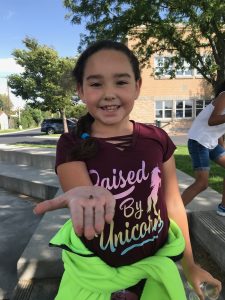 A student of Newman Elementary School shows off a firebug she found on the playground.

It turns out that Utah is one of the few places outside of Europe where one can find firebugs of the species needed for this kind of research. “It was sort of mystical,” says Colin Dale, a professor in the School of Biological Sciences, about the coincidence, “as if the universe were converging for us.” With the help of Christy Bills, entomology and malacology collections manager at the Natural History Museum of Utah who has a fairly comprehensive map of firebugs in Utah, Dale was able to secure a class of second-graders to help him collect the insects for his lab experiments.

The map is the result of a citizen science project hosted at the museum that tracks the dispersal of these insects along the Wasatch Front. Anyone can participate—just download the free iNaturalist app to a mobile device and take photos of firebugs wherever you see them. The more people involved in the project, the better the data will be.

At Newman Elementary School, a Title I school with a minority-majority population of mostly Latinx students in the Salt Lake City section of Rose Park, enough firebugs were collected and “plated” in the lab to isolate their bacteria to see if they were making toxins that will kill parasites.

“It was a great experience,” says Dale, “to go over there and to meet these children and to see them being engaged in real science. It seemed to have really stimulated them.” So much so that the class, taught by Manessa Adams, had “tons of questions,” for the principal investigator about all things bugs “as second graders are wont to do,” Dale quips. Shared stories of black widow spider bites took the fore.

The experience for the students was largely made possible by both Adams and Bills who, Dale says, has clearly gotten it across to them both before and after his visit “the big picture of the thing.” Science, he reminds us, is 90% trial and failure. Adams, he says, “inspired them that they were doing more than typical school work. More engagement like this can craft an interest to do science at an earlier age.” Adams agrees, “How neat that our little recess activity has turned into something so exciting!”

Tag-teaming of this kind can build a learning experience that is experiential. While Adams facilitated the citizen science project, Bills, a personal friend of Adams’, visited later to give them a context for the firebugs. “Kids have an intrinsic awareness and curiosity about [these things]. I love sharing bugs with kids and helping them learn more about them,” she says. 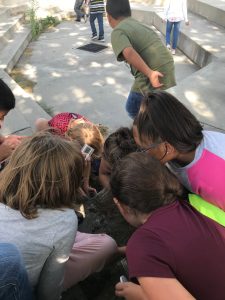 Elementary school students collected firebugs on their playground for biologist Colin Dale, who used the insects for his BIOL 5960 class.

Bills supplied vials for each child to do more collecting, along with gummy worms “because second graders,” she says wisely.

Bills spirited away some of the firebugs to be pinned and displayed later at the museum. Adams hopes that the whole experience will be brought full-circle by having her students visit the museum. If they do, they will see some of their own collection on public display. Bills’ intention is to return to Newman to talk to the kids about their isopod terrarium, their observations and possibly sort winter leaf litter to look for invertebrates under a microscope.

The exercise involving symbiotic bacteria in the gut of firebugs has already come full circle for Dale whose students in his BIOL 5960 class cultured bacteria and determined that one of the specimens has anti-Leptomonas activity. “We have now sequenced the genome of that bacterium and found one anti-protozoal protein already!” he reports.

Clearly, the firebug outing has impacted more than budding entomologists at Newman Elementary. “The thing I came away with from this,” concludes Dale, “is that we at our level should make more of an effort to connect with schools and the public,” with our research.

This article first appeared in OUR DNA, a magazine from the School of Biological Sciences: 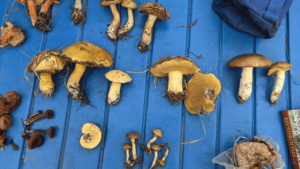