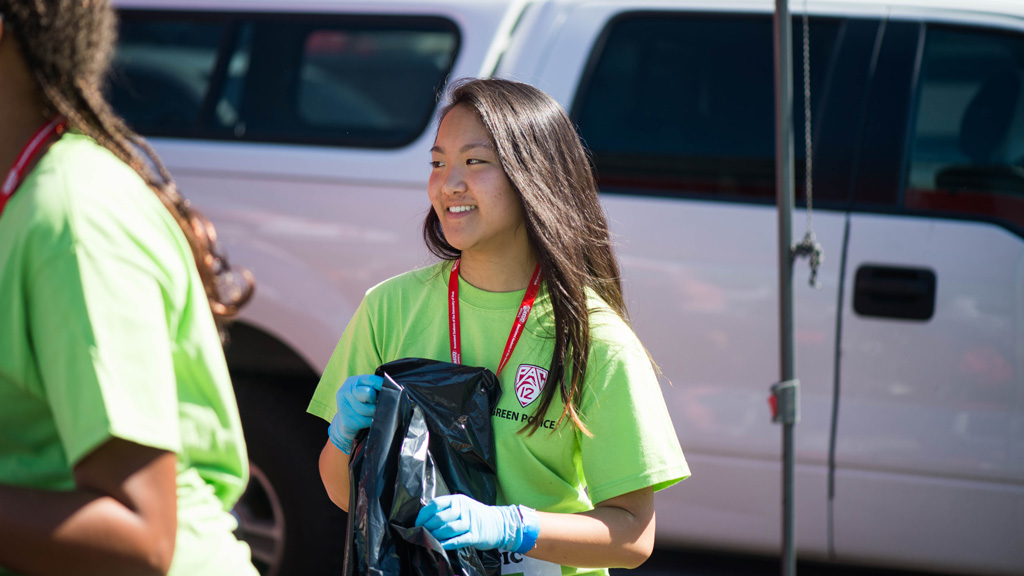 At the start of the 2009 football season, ASUU Sustainability Director Dave Burt organized a small group of volunteers to collect recyclables before and after games.

A week before the 2010 football season, Norah Olley, who was among the first group of volunteers, was appointed director of the student sustainability board. In this role, she wanted to expand the student-run recycling effort. 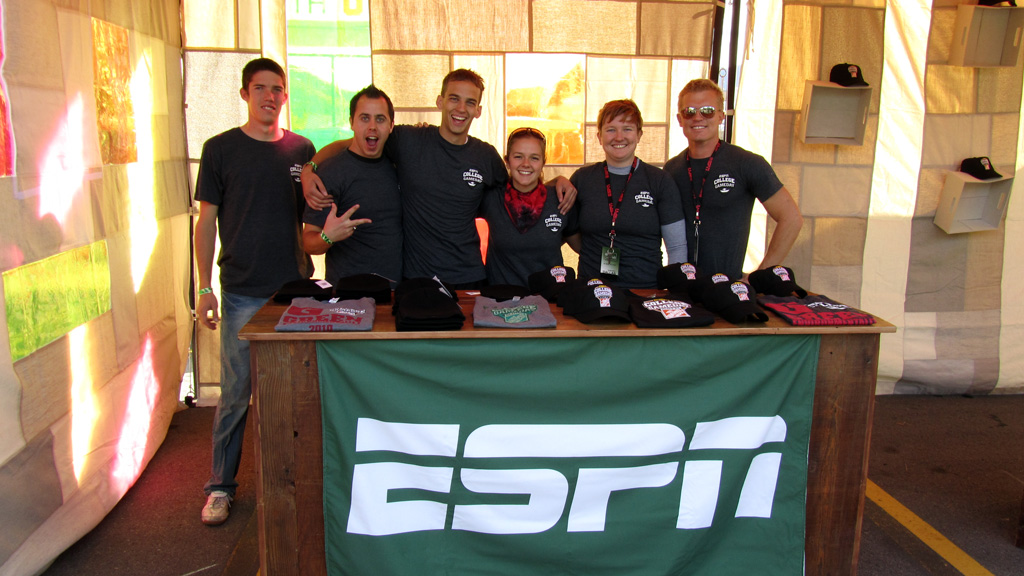 That year, more than 40 volunteers worked with ESPN’s Green Team during College GameDay. ESPN’s senior manager of Global Sustainability called this volunteer-based program the most organized recycling initiative he had seen at any College GameDay. This was the first year of Recycle Rice-Eccles as we know it today. 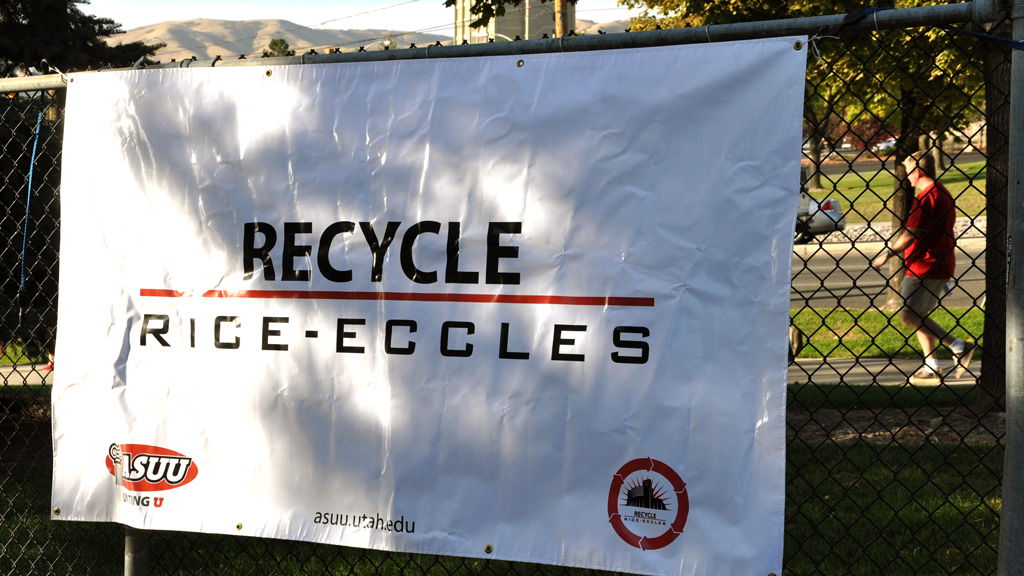 Norah Olley, a transfer student to the University of Utah, credits her mispronunciation of the stadium’s name to the naming of the recycling program.

“I came up with the name when someone corrected how I was pronouncing Rice-Eccles,” Olley said. “I thought it sounded like ‘recycles.’ It was this simple mistake that led me to the name Recycle Rice-Eccles.” 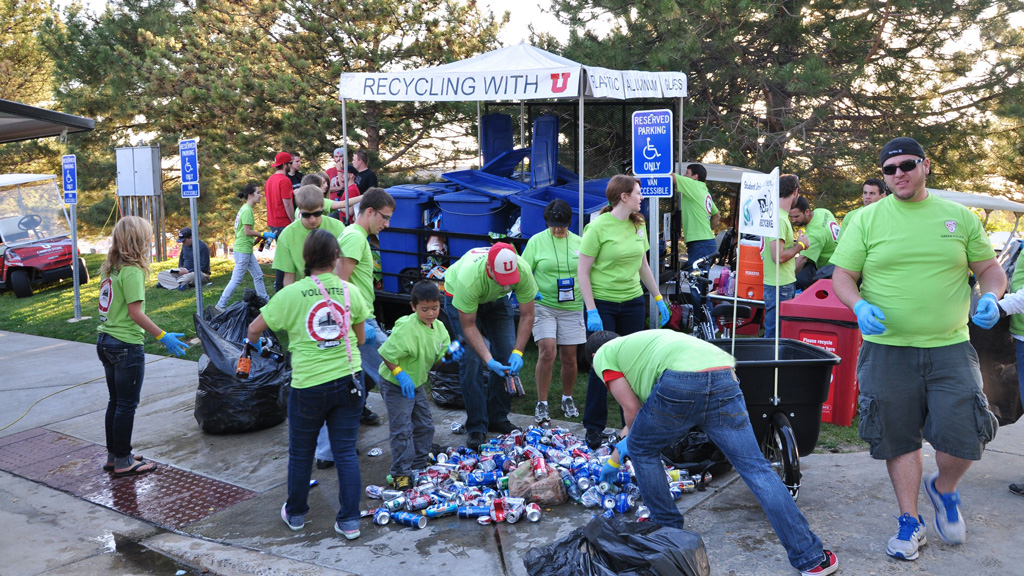 The Recycling Division of Facilities Management at the U helps student volunteers get the recyclables from the stadium to recycling facilities, and all the money generated from aluminum collected at Recycle Rice-Eccles is given to the ASUU Sustainability Board to use for future sustainable projects. 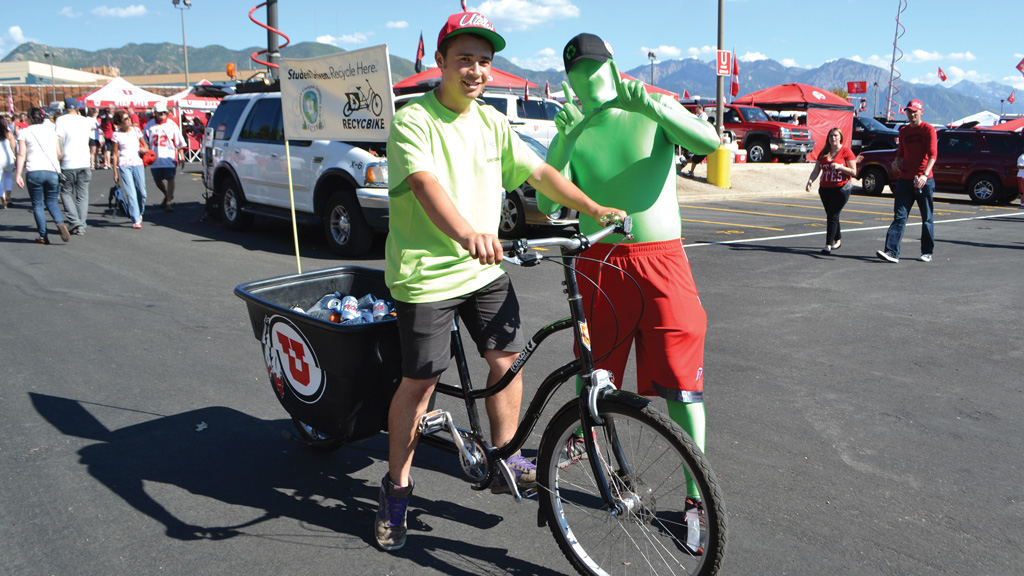 One unforgettable feature of Recycle Rice-Eccles is the “recycbikes” that troll the campus collecting aluminum, plastic and even glass. These bikes are equipped with a large bin on the back for collecting materials. The bikes were first introduced in the 2011 football season after student Derk Harris purchased three bikes with a grant from the Sustainable Campus Initiative Fund, SCIF, which is managed by the U’s Sustainability Office. A few years later, Matthew Kirkegaard earned a SCIF grant for an additional three bikes. Volunteers riding the bikes can chat with people while other fans use the bins as basketball hoops for aluminum cans and plastic bottles. 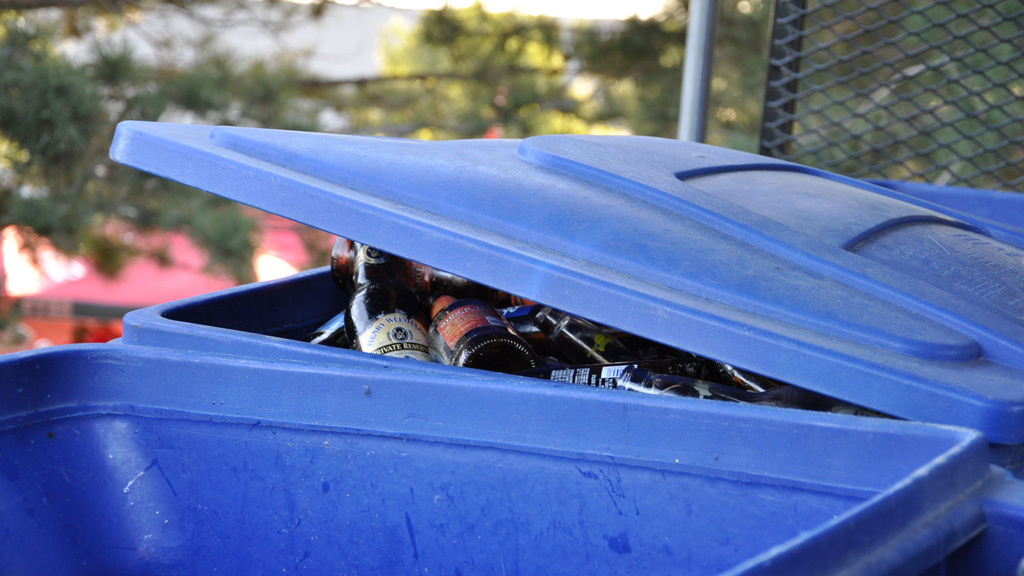 Today, Sawson Gholami, current ASUU sustainability board director is working to introduce the foundation for a large-scale, university-wide, pre- and post-consumer composting system that would take the program to the next level.

Currently, there is a limit to how many pounds of waste can be recycled by the university. Plastic bottles and aluminum cans weigh much less than food waste, so implementing a larger composting program will allow the U to increase its recycling efforts and move toward becoming a zero-waste stadium. 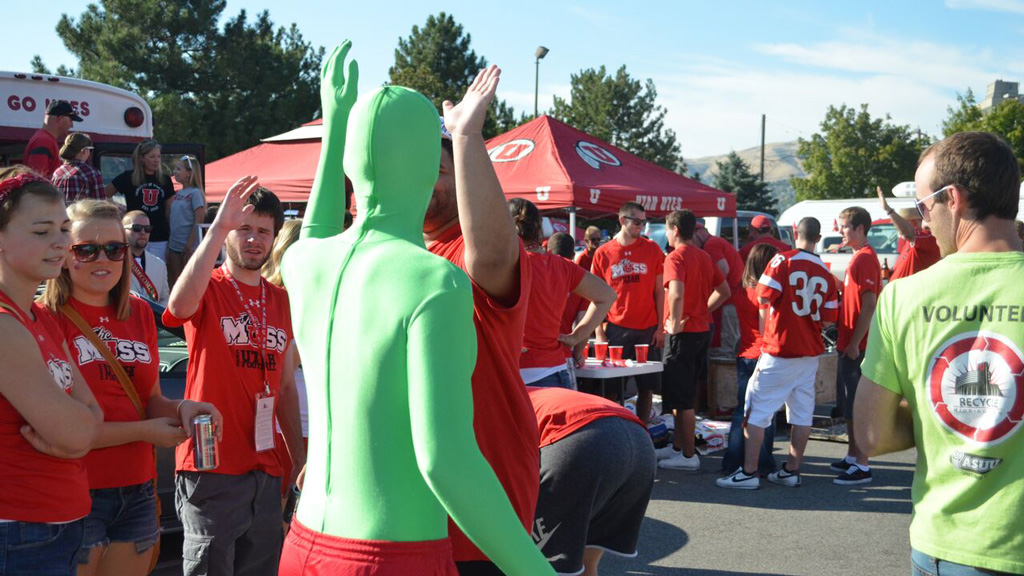 At the end of last season, Recycle Rice-Eccles had collected nearly 21,000 pounds of recyclables.

“Though Recycle Rice-Eccles is a fun and light-hearted event, the work we do creates serious benefits,” Sawson Gholami said. 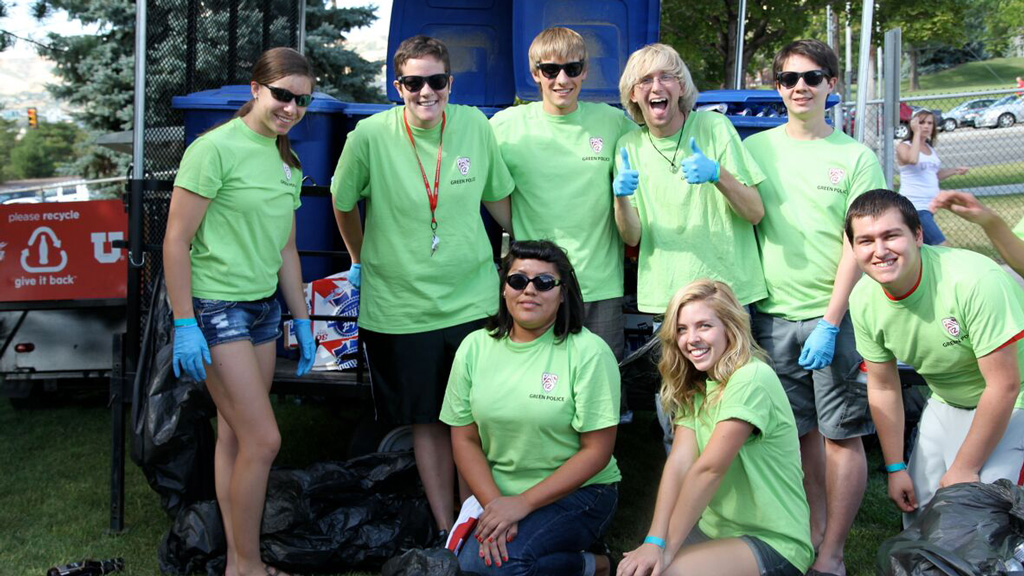 In 2014, the U became the first in the state to join the Green Sports Alliance, a nonprofit organization dedicated to reducing the environmental impact of athletic events. The membership is reflective of ongoing efforts to “green” University Athletics, including the Recycle Rice-Eccles campaign. 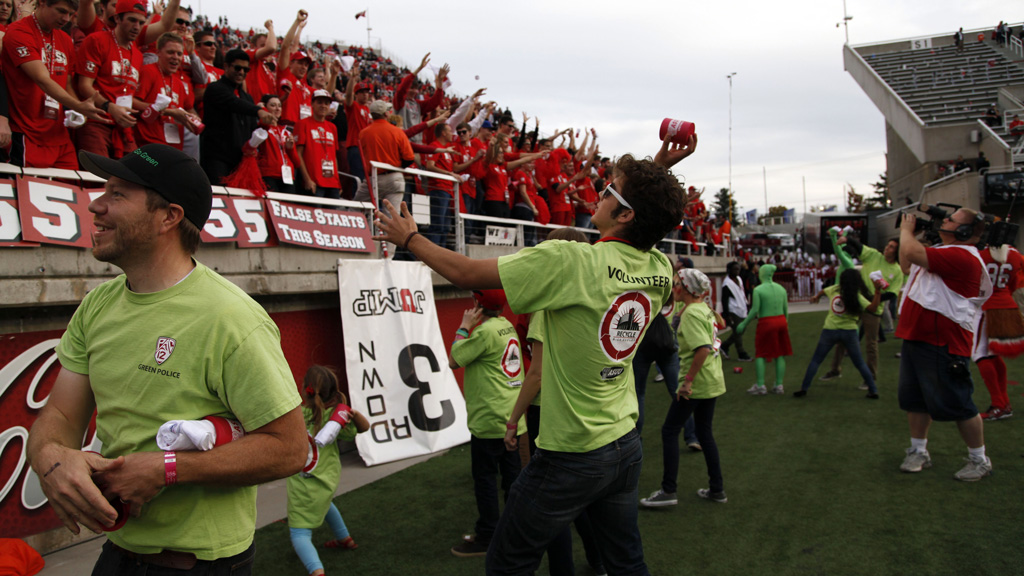 Students volunteers not only do their part to save the planet, but they also get free admission to the football game, a volunteer “go green” T-shirt, food and an unforgettable experience. For most games, volunteers are allowed on the field during the second quarter to throw T-shirts to the MUSS section. More information is available online. 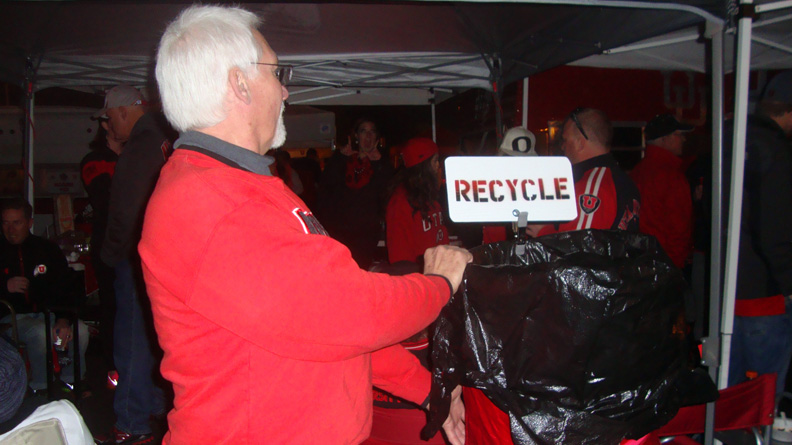 Fans can help the recycling effort by following these simple steps:

ASUU (Associated Student of the University of Utah) invites students, faculty, staff and the community to participate with the Recycle Rice-Eccles program. The mission of Recycle Rice-Eccles is to minimize waste by recycling aluminum, glass and plastic at the tailgate lot.

Since its beginning five years ago, Recycle Rice-Eccles has collected more than 25,000 pounds of recyclables per year. This great success is made possible thanks to volunteers who have donated their time and energy to collect recyclables from tailgate events and the stadium.

Volunteers get free admission to the football game, a volunteer “go green” T-shirt and food. Join us at the next home game and help the stadium go green.

To sign up, go to asuu.utah.edu/recyclericeeccles and fill out the form.