This year’s ​Pride Week at the U​, held Sept. 30-Oct. 4, celebrates queeroes from both in and around the university community including respected artists, LGBTQIA+ alumni, local politicians and proactive students, staff and faculty.
Kaya Aman - Office for Equity and Diversity

Language is a powerful tool that can be used to both isolate and unite. Even more impactful is the reclamation or creation of terminology to embody a notion or rallying cause.

“The word ‘queero’ was a joking combination of ‘queer heroes,’” Pride Week co-chair Taylor Anderson (she/her) laughed. “But the name stuck.” This practice is not uncommon to the LGBTQIA+ community, which is always consciously evolving their language with the intent to create a more inclusive ecosystem. In this spirit, the Pride Week Planning Committee selected “Queeroes: Reclaiming Hero” as this year’s theme. 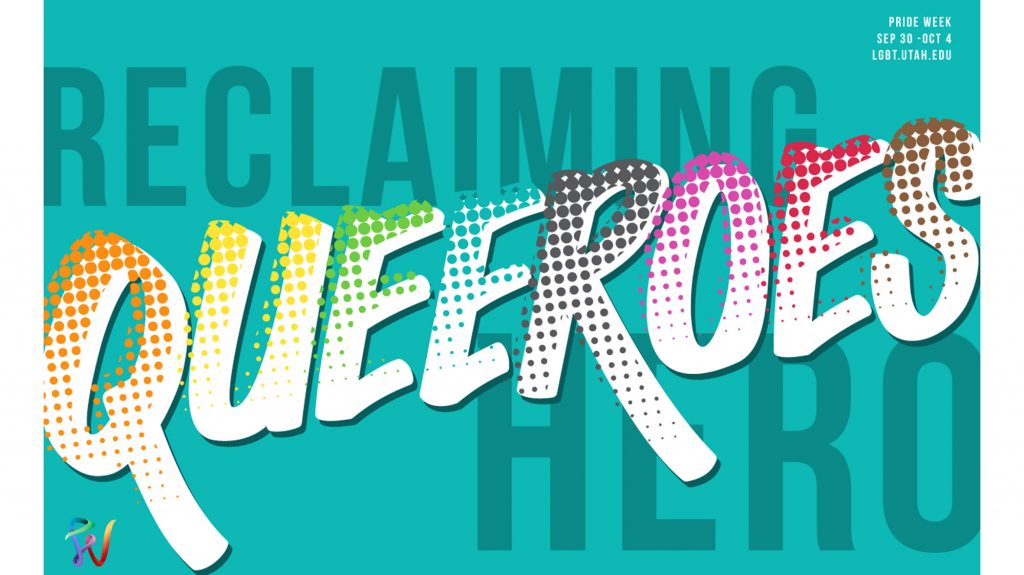 “This was chosen because of its resonance with such a wide variety of people,” said Austin Hendrickson (he/him), Pride Week’s other co-chair. “It includes everyone with any queer identity, and we’re hoping that by ‘reclaiming’ the word hero, we can make queero something that the entire community can identify with and find pride in.”

With the knowledge that “queero” is a portmanteau (a new term formed by combining words and their meanings), who can claim to be a queero?

“To me, a queero is someone who lives true to their queer identity,” said Hendrickson. “The state of living each day and embracing [oneself] is such a powerful and important statement for any individual to make.”

“Throughout history, queer people have fought, marched and protested as a way to establish their worth and identities,” said Anderson. “Their actions inspire us to this day. But also important is the quiet courage that it takes every day to exist and live your life as a queer human. Out or not, visible or not, every queer person is a hero and an inspiration.”

For this year’s ​Pride Week at the U​, held Sept. 30-Oct. 4, the planning committee intentionally worked to incorporate queeroes from both in and around the University of Utah community. Respected artists, LGBTQIA+ alumni, local politicians and proactive U of U students, staff and faculty will all play an active role in celebrating queeroes and educating attendees on the theme.

Amanda Beardall (she/her) has been diligently coordinating with the Alumni Association and Career & Professional Development Center for the ​Careeroes​ Pride — a networking session with LGBTQIA+ alumni and inclusive employers.

“Everyone who comes to our event is a queero,” said Beardall. “You are a queero simply for being employed as a queer and/or trans person. You can be a superqueero by being a role model, mentor and advocate for LGBTQIA+ people in your company and within your field.”

Additional queero-centric events include a “gaymer” night with remarks from ​Lenore Gilbert​, a lecture with activist ​Tourmaline​, ​a live performance by ​Rufio​ with ​Mel Soul & The Messenger​, and a town hall with Salt Lake City mayoral candidates ​Luz Escamilla​ and ​Erin Mendenhall.

“I’m grateful to see engagement in LGBTQIA+ issues from both parties vying to lead our community,” said Hendrickson. “The discussion with the two contenders will center around their platforms for LGBTQIA+ policy—an issue of critical importance to the queer community and all of its queeroes in and around Salt Lake.”

“Being a queero can be as simple as being visible,” said Connor Healy (he/him), who has been coordinating Pride Week’s closing event. “Drag queens have been at the forefront of visibility for the queer community since the beginning of the gay rights movement. We’ve chosen to host a drag show to highlight this aspect of queer pride.”

Though it’s easy to be starstruck by all of these accomplished queeroes, the Pride Week co-chairs reiterate the simplicity of this year’s theme.

“We want to celebrate you and the other queeroes in our lives,” said Anderson. “We will be entertained, inspired and educated by exceptional members of the community. We will be connected to others in beneficial ways and provided with welcoming spaces to exist together as queer folk.”

Added Hendrickson: “We hope to highlight the fact that every LGBTQIA+ individual is a queero in their own way, simply by virtue of their decision to be themselves and live true to their identities.”

See the full list of Pride Week events here​ or at ​lgbt.utah.edu​.