As proposed legislation to repeal provisions of the Dodd-Frank banking reforms — measures put into place to protect consumers after the housing crisis financially devastated millions of Americans — moves ahead in Congress, a new legal analysis released by University of Utah S.J. Quinney College of Law professor Christopher L. Peterson outlines why passage of the Financial Choice Act of 2017 could have dangerous consequences for consumers if the bill turns into law in the coming year. 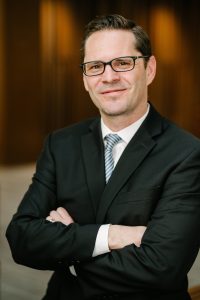 Peterson’s research, titled “Choosing Corporations Over Consumers: The Financial Choice Act of 2017 and the Consumer Financial Protection Bureau,” examines how the proposed legislation would affect the enforcement ability of the Consumer Financial Protection Bureau. The agency, known by the acronym CFPB, was created by Congress six years ago to protect consumers from unfair and deceptive lending practices and as a tool to help the American public recover from scars left by the Great Recession.

The agency’s future has again come into question after its director, Richard Cordray, announced he will step down from his position at the end of November, prompting discussion about what’s next for the agency’s leadership.

“Under Richard Cordray’s leadership, the federal government set up an effective watchdog that has been making progress in stopping the financial tricks and traps that have harmed so many American families,” explained Peterson. “But with Director Cordray stepping down and anti-consumer legislation making its way through Congress, the Consumer Bureau is at a crossroads.”

Peterson’s research, set to publish in a forthcoming issue of Consumer Finance Law Quarterly, shows how the agency ordered banks and other financial companies that engaged in illegal practices to return nearly $12 billion in restitution to the pockets of harmed American families during Cordray’s administration.

The consumer bureau works as a civil law enforcement agency to prevent illegal financial practices — such as predatory lending — from hurting consumers. Peterson’s latest research has found that the Financial Choice Act of 2017 — which has passed along party lines in the House of Representatives and is awaiting action in the Senate — could limit the agency’s ability to enforce the law on behalf of consumers who have been taken advantage of by banks and other financial corporations.

“My study compares the bill to the CFPB’s actual law enforcement track record. In particular, the study asks, ‘How would the CFPB’s enforcement track record have changed if the Choice Act had been in effect from 2012-2016?’” said Peterson. “The short answer is that the law would have wiped out the vast majority of CFPB law enforcement, including seemingly uncontroversial cases like the case against Wells Fargo for creating over two million fake, unauthorized bank accounts.”