Students in social work professor Caren Frost’s honors course went from the classroom to the community to get a more hands-on understanding of what it is like to be a Muslim student at the U. 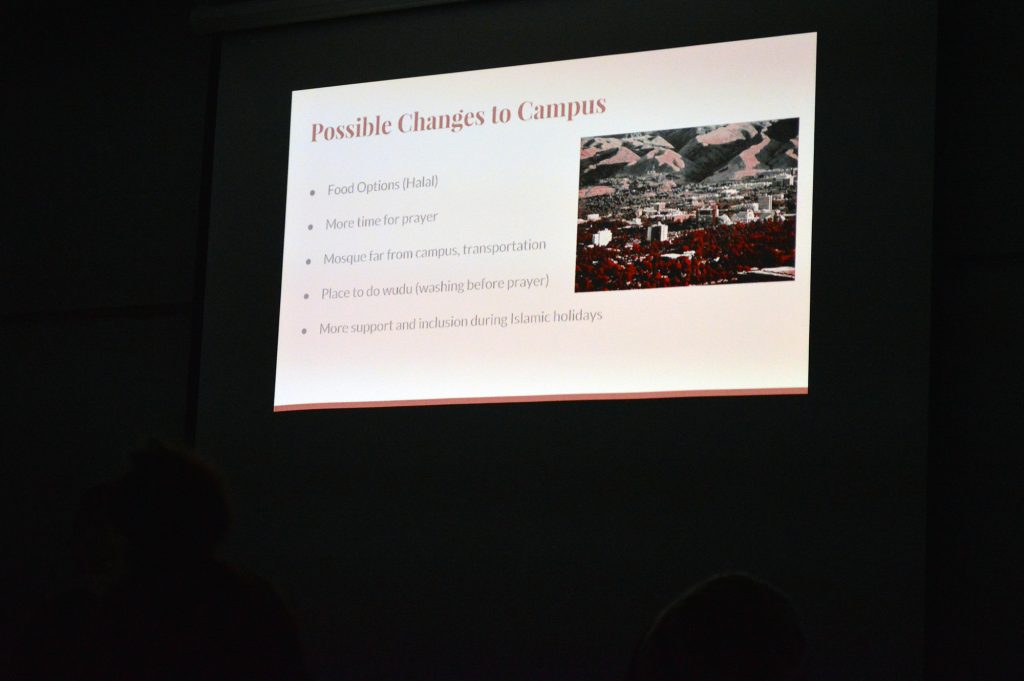 The honors students conducted the surveys and presented their findings as their end-of-semester project for the course, Voices of Muslim Women.

The 28 students worked in teams to find and interview more than two dozen of their peers, with a focus on exploring high school and college experiences, experiences on-and off-campus and relationships with friends and parents. Some participants grew up in Utah; others came here as international students.

The interviewees included students who’ve lived in other states and they described Utahns overall as more understanding and accepting. According to one student presenter, an interviewee found that in Utah, “when you talk about religion, people get it. When you say ‘I do this because of my religion,’ people understand that.”

Another interviewee initially worried about leaving the “bubble” of acceptance and familiarity experienced during high school but upon arriving at the U found support and understanding.

Most described angst over inaccurate portrayals, particularly by the media, of their faith, which they said typically fail to reflect the diversity of the Muslim community. “Don’t fall for the media bias,” one interviewee said.

Muslims are required to pray five times a day, at daybreak, noon, mid-afternoon, sunset and evening. The Muslim students said they appreciate that the U provides a prayer room at the Union Building, but said making use of the room in off-hours is challenging when shuttles aren’t available between the residence halls and the building. They also wished there was a mosque closer to campus.

Some student teams had an ‘aha moment’ listening to interviewees, discovering they had more in common than the students assumed. The team that focused on relationships with parents, siblings and friends said, with the exception of dating practices, participants gave answers that sounded a lot like how any non-Muslim student would respond.

“It is a pleasure to have students from international and national backgrounds engaging in conversations about how their lives are more similar than they imagined,” Frost said.