Debora Threedy was living the life of a fledgling actor after graduating with a degree in theater from Beloit College in 1973, when a daunting thought dawned on her.

Threedy loved the stage. But as she started the second year of an acting school in Michigan — where she’d moved to try to earn a living through performing — she realized that a life in show business would mean searching for new jobs every three months for the rest of her life.  It was time for plan B.

“I thought, if I can’t do theater, what am I going to do?” recalled Threedy, now a longtime professor at the University of Utah S.J. Quinney College of Law. She followed in her father’s footsteps and went to law school, finding a second passion in learning about the intricacies of the law.

She may have left the stage spotlight 40 years ago to become a lawyer and later a law professor, but Threedy hasn’t veered away from her roots in theater all together. Over the years, she has remained a playwright, authoring multiple works and earning the reputation as a popular Salt Lake City writer whose stage adaptions meld social justice and legal issues into contemporary drama.

This month, she’ll unveil her latest play, “One Big Union,” at the Utah Shakespeare Festival on Aug. 12, 13 and 26 at the Eileen and Allen Anes Studio Theatre at Southern Utah University.

Threedy’s play, directed by Jerry Rapier, explores a question that remains a staple in many Utah history classes: In 1914 labor activist Joe Hill was arrested, tried and convicted for the murder of a retired policeman and grocer, John G. Morrison.  But was he a murderer or an innocent man?

The case of the Joe Hill trial took the Salt Lake Valley, the national labor community, and even the international community by storm. Considered a martyr by many, his songs at the time envisioned gender and racial equality and criticized the gross income disparities of his time. Today, he remains an enigmatic folk hero, but beyond the mythology lies a larger story of protest, still relevant a century after his death, said Threedy. The mystique around the case and the recent 100-year observance of Hill’s execution made the timing right to write play about Hill, she said.

Threedy was dining with Gibbs Smith, a longtime friend — who also published one of the authoritative history books on Joe Hill — a few years ago when he suggested the idea of writing about Hill to his friend. She was intrigued.

“I’d been aware of the story of Joe Hill for a while. Tucked in the back of my head was the idea that the case would be a great project for me. It’s Utah. It’s law. It’s a great story for me,” Threedy recounted. Smith and Threedy agreed that the upcoming centennial of the Hill execution in 2015 would be a good goal to see the play produced. She chipped way on a script and finished the adaption several months ago. 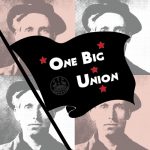 of two new readings to be presented at the festival. The other submission, “How To Fight Loneliness,” is by nationally acclaimed playwright Neil LaBute. Those who attend the readings will be able to attend an after-play discussion with the playwright, director and audiences.  (Tickets are $10 each and are on sale at bard.org)

After premiering at the Utah Shakespeare Festival, Threedy’s Hill play will open at Plan B Theater in Salt Lake City in November, giving Salt Lake County residents another chance to catch her latest work.

Outside of knowing her playwriting, Utahns are likely familiar with Threedy for her appearances on stage with the Salt Lake Acting Company. She wrote and performed a one-woman show, “Desert Wife,” which toured the state with funding from the Utah Humanities Council. “One Big Union”’s November opening at the Plan B Theatre in Salt Lake City, will follow other productions written by Threedy that have been staged at the venue. Her play “The Third Crossing,” which also was one of the winners of the Fratti-Newman New Political Play Contest in New York, had a run at Plan B. And in 2006 she workshopped her play “Nemo 1934,” which was later produced by Plan B as “The End of the Horizon.”

Threedy knows she’s a bit of an anomaly in the world of legal academia, a place where a background in philosophy is often more common to find than a person who knows the ins and outs of contract writing — plus the merits of stage lighting, special effects and the other elements that go in to fine-tuning a stage production.

“I facetiously like to say ‘I’m a Gemini’, so two-faced,” Threedy said. “For me personally, the intellectualism, the logic of law, meshes really well with the emotionalism and the intuitiveness of theater.  I like both of them a lot. They each give me something that the other doesn’t.”

The commonality in both professions, she noted, is a lot of attention is paid to words in both law and theater. In the coming year, Threedy will spend fewer hours focusing on many of those legal words. After 30 years as a law professor at the S.J. Quinney College of Law, she is planning to retire from teaching after the fall semester. Threedy will leave behind a legacy at the law school, where she has taught contracts, contract drafting, law and literature, and legal issues in archaeology. In 2000, she was a recipient of the University of Utah Distinguished Teaching Award, and has received a host of other awards along with publishing dozens of research articles over the years.

Threedy’s retirement from the law school, however, won’t keep her idle for long: At the top of her to-do list is to spend more time on writing plays, likely in the desert landscape of Torrey, Utah, near the state’s jaw-droppingly beautiful Capitol Reef National Park.

“I’m sure there will be times when I will miss teaching because I have enjoyed it immensely,” said Threedy. “But I also know it’s time for something new.”