MORE THAN A FEW GOOD MEN

Contrary to traditional expectations of unbalanced sex ratios, places with more men than women do not typically experience higher rates of family and social instability, according to a University of Utah study.
Paul Gabrielsen, science writer, University of Utah Communications

Contrary to traditional expectations of unbalanced sex ratios, places with more men than women do not typically experience higher rates of family and social instability, according to a University of Utah study. The study by anthropologists Ryan Schacht and Karen Kramer, published August 24 in PLOS ONE, finds instead that surpluses of men are associated with higher levels of marriage, relationship commitment and paternal involvement, a contrast to prevailing theories that an abundance of single men lead to outcomes of crime, violence and broken homes.

“We’re trying to challenge notions of male abundance driving negative outcomes,” Schacht says. “While unbalanced sex ratios are an important source of family instability and social insecurity, it is increasingly being shown that much of our concern should be reoriented to populations with too many women.”

Widespread concerns about gender ratios’ effects on society intensified in the 1980s, largely as a result of China’s one-child policy. Preferences for male children led to skewed sex ratios in favor of males, who are projected to reach a surplus of nearly 20 million by 2020. While the one-child policy was relaxed in 2015, the male-bias in China will nonetheless be experienced for generations.

Male abundance is particularly worrisome to social scientists because criminological studies consistently find that men are predominantly both the perpetrators and victims of violence. Additionally, men, in general, are typically more aggressive, competitive and prone to risky behavior than women, leading to the prediction that unmarried men destabilize both families and societies. A 2004 book, “Bare Branches,” (the term referring to excess unmarried men in Chinese culture) highlighted the potential dangers of such a demographic imbalance in both China and India due to the cultural practice of son preference. “Bare branches theory” became the prevailing paradigm supporting the association between male excess and family and social instability.

For Schacht’s 2014 doctoral dissertation, he traveled to Guyana to study dynamics of family formation in eight small villages in the country’s interior. Economic conditions in the region had spurred local sex-biased migration and shaped sex ratios in each village, providing a laboratory for Schacht to compare family outcomes in response to partner availability.

“The men on either end of the continuum were very different,” Schacht says. “What became clear was that simple sex-based arguments or intuitions were, in some cases, useful rules of thumb, however in many other cases they were inappropriate.”

The reason, Schacht believes, may lie in an economic theory of mate selection, rooted in the law of supply and demand. “If you are the relatively rare sex, you can be more demanding of a potential partner. You can be choosier, and of the partner you choose, you can be more demanding of what you want in a relationship.” When faced with an abundance of women, men’s “choosiness” may manifest through a preference for multiple partners and short-term, uncommitted relationships.

Additionally, Schacht reviewed the available literature on both Western and non-Western populations. From the review, what became clear was that male-biased societies do not experience greater violence than others. Moreover, he also found that rates of monogamy were highest in male-biased communities.

“While we have our own intuitions and preferred theoretical frameworks, ultimately we’re data driven scientists,” he says. “We try to let the data speak for itself. And what is increasingly clear is that places with more women consistently have more negative outcomes.” 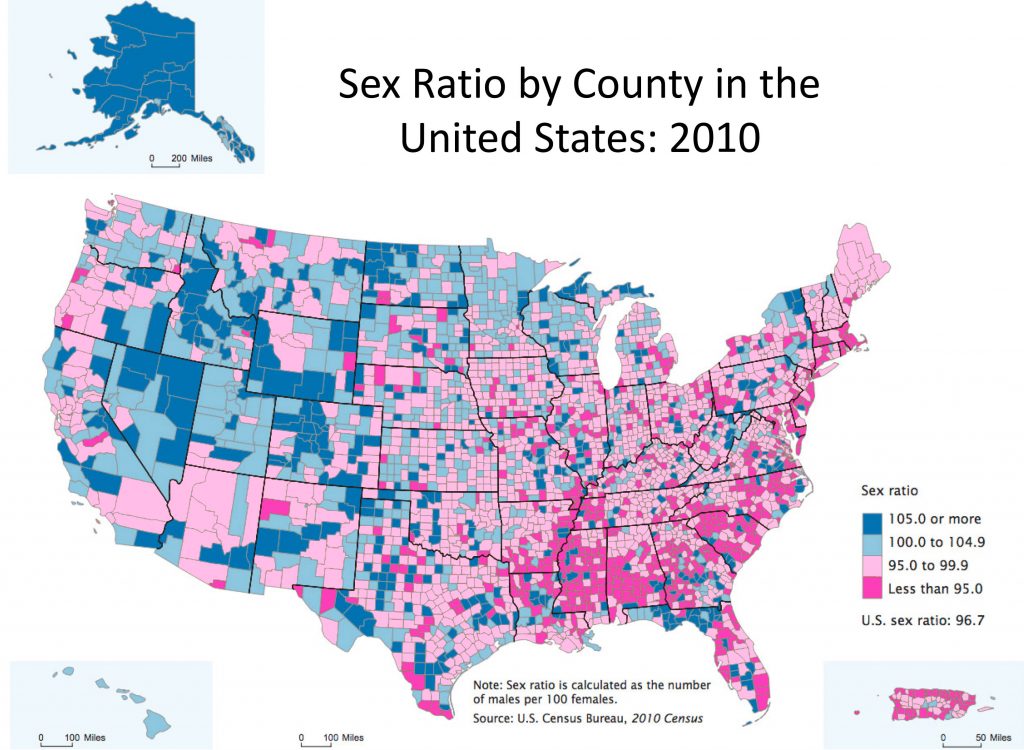 Men, women and children in America

To extrapolate Schacht’s findings to a larger, Western population, Schacht and Kramer used U.S. Census data to test the association between sex ratio imbalance and family outcomes across 2,800 counties in all 50 states. They evaluated the relationship between gender ratios and four variables indicative of family stability: The percentage of women and men married in each county, as well as numbers of female-headed households and out-of-wedlock births.

The results may appear to be paradoxical. “You get more unmarried men when there are fewer of them,” Schacht says. “Men may be less interested in committed relationships when they are relatively rare and partners are abundant. Men may be less interested in settling down with a single partner when there are multiple options available.” He is also quick to point out that the negative outcomes associated with female-biased counties are probably not driven by the behavior of the women in those counties. “It’s not the excess women who are driving the elevated levels of instability,” he says. “It’s more likely to be from the relatively high proportion of unmarried men.”

Because Schacht uses population-level data, he is cautious about claims of causality. It’s difficult to draw any definite conclusions about which demographic or cultural factors cause certain societal outcomes. Nonetheless, from the characteristics of different counties, Schacht is able to explore possible explanations for the data trends.

“The cool thing is that this finding is robust across 2,800 counties in the U.S. for all outcomes of family stability,” Schacht says.

The prevalence of male-biased counties in Western states may be connected to some of the frontier aspects of the West that persist today, he says, such as ranching, mining, and drilling industries. Utah and Idaho have some of the highest rates of married adults in the nation, also possibly connected to the heritage and culture of Mormon populations in those states. Conversely, the number of female-biased counties in the Southeast could be connected to high incarceration rates, which disproportionately affect young African-American men and remove them from their respective communities.

Because the causal link between gender ratios and societal outcomes still needs much research, Schacht doesn’t think that moving men into female-biased areas will necessarily clear up societal ills, since there are many demographic factors in play in every community, including levels of poverty, inequality and education, to name a few. “It’s not just sex ratio,” he says. “It’s sex ratio in tandem with a number of other variables that all play a role.” Still, his data do not support the prevailing views that an excess of men is a recipe for a societal powder keg. Identifying areas of sex ratio imbalance can help local governments target populations at risk for family instability and resultant negative child education and health outcomes, Schacht says, and accordingly allocate limited resources to do the most good.

Cultural factors also come into play when applying Schacht’s results to China or India. In India, for example, the caste system may exclude low status men from the pool of available marriageable partners. Thus, in this cultural context, the risky behavior of men may be independent of their local sex ratio, challenging straightforward expectations present in the scientific literature.

Regardless of culture, however, the study suggests that people’s relationship goals are as much a matter of context as they are of chromosomes.

“It’s time to move away from simple sex-based arguments about what people want,” Schacht says, “because one of the most important factors influencing the kind of relationship one can have is: is anyone available?”