“I’m not a hero, I just did what I did because it was instinctual,” Rachel Staheli, University of Utah senior accountant for the College of Nursing said after she and other U employees sprang into action to stop a runaway bus on Foothill Drive.

She said Friday, May 1, was a normal day until the UTA bus she and 10 other people were riding to campus stalled after exiting I-215 onto Foothill Drive at the top of the hill. The bus driver put the parking brake on and exited the bus attempting to manually restart the batteries .

Kathy Fellows, an administrative assistant for the Division of Cardiovascular Medicine in the School of Medicine, was sitting in the front of the bus across the aisle from Staheli. She said the driver had to walk around the bus to the driver’s side to access a reset button. The driver did something and the bus doors slammed shut.

“Rachel and I looked at each other and I thought, ‘This isn’t good.’ The bus started rolling downhill, gaining speed, and that’s when Rachel and I both ran forward,” said Fellows.

Staheli said she gave the door two hard tugs, but it didn’t open.

“The driver was pounding on the door saying, ‘Get the brake, get the brake.’ I jumped into the driver’s seat and started looking for the brake pedal,” Staheli said.

While Staheli looked for the brake pedal, Fellows attempted to open the door while keeping her balance as the bus continued to move downhill.

“I was very worried about the cars in front of us and what would happen if we didn’t stop,” said Fellows.

Staheli found the brake, pushed it and “Everyone flew forward a little bit, but the bus didn’t stop moving. I hit the brake a second time all the way down and everyone standing hit the floor,” she said. “I was shaking so badly that I had to shift my whole body forward to maintain the leverage necessary to keep the brake pedal flat.”

Fellows said another U employee broke the plexiglass above the door, pulled the emergency release on the air pressure and the bus driver got back inside the bus and took Staheli’s place.

Once back in their seats and realizing the danger was over, the passengers celebrated that no one was seriously hurt and that the bus didn’t hit anything, including any of the cars in rush hour traffic or the power pole that was directly in its path.

“If it wasn’t me,” Staheli said, “It would have been someone else. I just see it as people trying to get stuff done.”

*Coverage of this story can be found on KUTV and KSL. 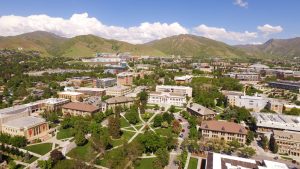 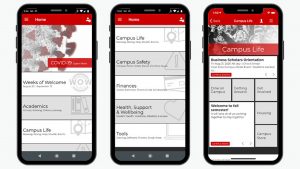 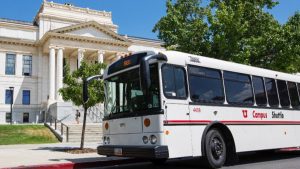