Michael Zhao loved sushi, travel and classical music. His lifelong passion and ardent pursuit, however, was always mathematics. His fascination with math took him from the 100 Club in kindergarten to Cambridge University as a Churchill Scholar. On Dec. 8, 2018, while at Columbia University chasing his goal of becoming a college professor, Zhao passed away due to a sudden heart attack. 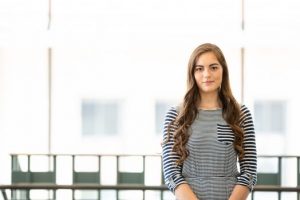 But on April 18, 2019, Zhao’s zeal for math continued with the naming of the first recipient of the Michael Zhao Memorial Scholarship. Taylor Walker, an undergraduate studying mathematics, is the first awardee.

“The scholarship aims to recognize a truly outstanding mathematics student,” said Davar Khoshnevisan, chair of the Department of Mathematics, “which is consistent with celebrating Michael’s memory.”

Zhao grew up in Salt Lake City and attended Skyline High School, where he was first chair in flute and served as captain of the debate team while also attending Canada/USA Mathcamp and taking math courses at the U. As an undergraduate at the U, Zhao received the Eccles Scholarship that supported his studies in the Honors College. Zhao was intrigued by the breadth of study the Honors College offered—a place where he could read Thomas Aquinas and David Hume, while also studying Eastern philosophy and literature from texts like the Bhagavad Gita and the Tao Te Ching.

In 2017, he was the second U student to win the prestigious Churchill Scholarship. “It’s a common perception that skill in mathematics is only due to talent, but hard work counts for much more,” Zhao said. “Having mentors is also extremely helpful, and I am indebted to many faculty members, graduate students and engineers for their guidance and encouragement.” 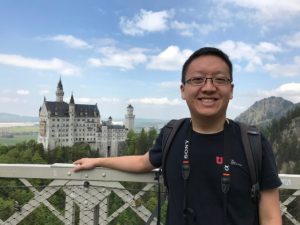 Michael Zhao travels in Germany in 2018.

Many of the faculty in the U’s math department have fond memories of working with Zhao. In an interview in 2017, professor of mathematics Gordon Savin, who served as Zhao’s honors thesis advisor, said, “Mike is one of the strongest undergraduate students we have had since I have been at the University of Utah, more than 20 years. For someone his age, he already has an incredible level of maturity and mathematical knowledge.”

He also worked with Dragan Miličić. In the same interview, Miličić said, “We often have discussions on various topics related to math [algebraic geometry, number theory and representation theory]. I was always impressed that talking to Mike feels more like talking with a colleague and not a student.”

“Many people remember Michael as a brilliant student, excelling under an almost impossible course load covering a large range of topics in mathematics and computer science,” said Braxton Osting, assistant professor of mathematics. “In spending time with Michael, I also came to know him as a genuinely kind person, generous with his time and helpful to his fellow students.”

After Zhao passed away, math department faculty and fellow Churchill Scholars approached Khoshnevisan with the idea of establishing a scholarship in Zhao’s name. Khoshnevisan got approval from Zhao’s parents. They, along with colleagues, friends and even his high school math teacher, reached out to their community for donations.

The new scholarship, partly funded by the Department of Mathematics as well as by donors, keeps Zhao’s memory alive in the department. If you’d like to contribute to this scholarship, contact Tiffany Jensen at tiffany@math.utah.edu.