University of Utah Health announced the creation of the Dr. Russell M. Nelson and Dantzel W. Nelson Presidential Chair in Cardiothoracic Surgery to honor the legacy of a medical pioneer and global leader. Now the president of The Church of Jesus Christ of Latter-day Saints, Russell M. Nelson is a recognized pioneer in heart surgery who led the university’s cardiothoracic program more than 60 years ago. 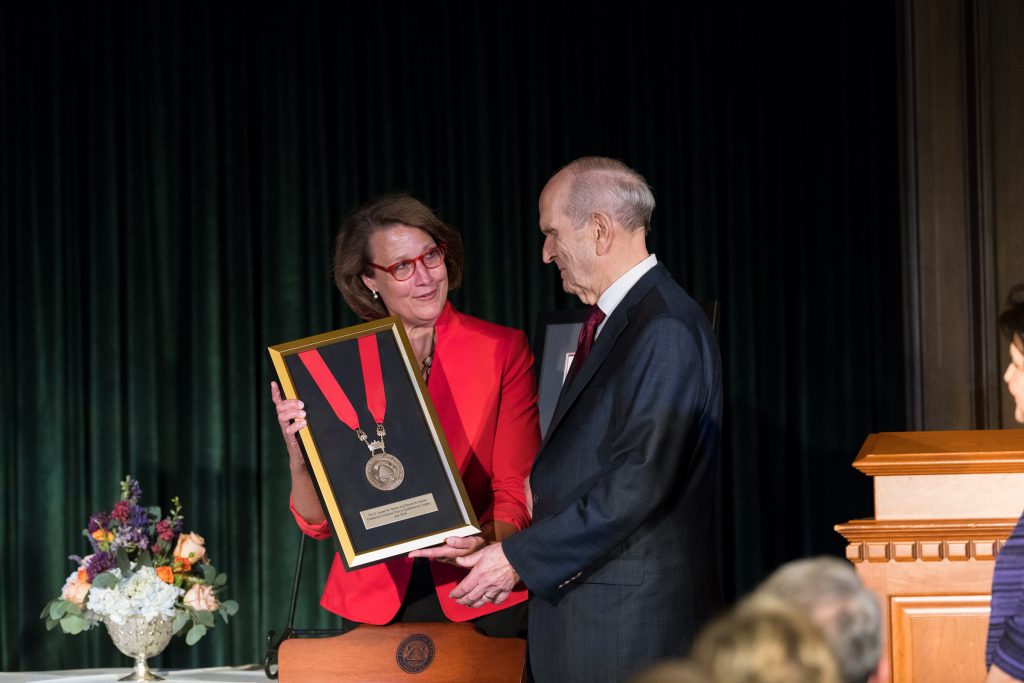 “President Nelson is today acknowledged as one of the world’s most influential leaders of faith,” said Ruth V. Watkins, U president. “Before his call to the church, he was a giant in the field of health science, an innovator who pioneered new technologies and methods, and an educator who trained generations of cardiac surgeons. With the creation of this chair, the university proudly recognizes his accomplishments and ensures that his intellectual inheritors are equipped to carry forward his vision.”

“It is an honor to be recognized by the University of Utah with this chair,” said Nelson. “I am confident that the continuing work and research this chair supports will bring credit to this great institution.”

Nelson graduated from the University of Utah in 1945, where he also earned his medical degree in 1947. Nelson did postdoctoral study at the University of Minnesota, where he and fellow researchers developed a heart-lung machine that in 1951 supported the first-ever human open-heart surgery.

“That technological innovation was seminal, and really opened the door to modern heart surgery,” said A. Lorris Betz, interim executive dean of the university’s School of Medicine, senior vice president for health sciences and CEO of University of Utah Health. “When President Nelson returned to our state, he continued to develop innovative new techniques and therapies, and established our university as a leader in this field.”

Nelson became the first surgeon to perform open-heart surgery in his home state using this innovative technology. Driven by a desire to pioneer health, he worked as a surgeon at LDS Hospital and served as a faculty member in surgery and director of the Thoracic Surgery Residency Program at the University of Utah School of Medicine for almost two decades, advancing the frontiers of cardiovascular surgery, training generations of cardiac surgeons and saving countless lives.

Nelson was well-known for considering his medical practice a service to others and an expression of his faith. In 1979, answering a call from the LDS church to build relationships in China, he traveled to Shandong, where he performed the first open-heart surgery in that nation and trained 23 surgeons in the procedure. Today, it is estimated that more than 2,000 surgeries per year are performed at Shandong University’s affiliated hospitals by the surgeons Nelson trained, who are in turn educating a new generation of professionals throughout Asia.

In 1984, Nelson was called to serve the LDS church and departed his medical career. The division continues to bear his imprint to this day.

“It is hard to overstate President Nelson’s contributions to his field, and deeply humbling to hold a chair named in his honor,” said Selzman. “While technology and techniques have advanced, the mission and practice of our cardiothoracic program remains as he established it. We continue to build on the foundation he laid.”

Selzman, who joined University of Utah Health in 2008, is a highly accomplished and recognized surgeon specializing in complex structural heart disease as well as minimally invasive heart surgery. He has chaired the Cardiothoracic Division since 2015 and is the surgical director of the Cardiac Mechanical Support and Heart Transplant program. He has published more than 165 manuscripts in peer reviewed journals and authored chapters in several textbooks. Selzman’s clinical and basic science research, for which he has a funded laboratory, explores the mechanisms of heart recovery from heart failure.

“We have made great advances in the treatment of diseased hearts, but there’s so much more to learn and do,” Selzman said. “Dr. Nelson’s legacy was to never sit still. Always ask questions and derive solutions that will immediately impact patient care. His creativity and genius cannot be replicated, but we strive to emulate.”

Today, the Cardiothoracic Division continues as a national leader in cardiac surgery, serving patients in 20 different states across the country. The university is particularly known for its expertise in advanced heart failure requiring mechanical circulatory support or transplantation, innovative approaches to treat valvular heart disease. The division has also become a leader in treating coronary disease at the cellular level using stem cells and other techniques to help diseased tissues regenerate. The U is the only program in the intermountain west to perform an array of procedures for specific patients, including those with the end stages of lung disease and children with inherited heart issues. In partnership with the Huntsman Cancer Hospital, the division also delivers state-of-the-art surgical care for patients with thoracic malignancies.

“Essential to our success is that we truly are a comprehensive academic medical center,” said Selzman. “High-quality patient care is our first and foremost goal, but our mission mandates two additional pillars of research and education. Ultimately, the strength of each pillar makes the whole division stronger.”

“I have great faith in Dr. Selzman and am impressed by his leadership of the Division of Cardiothoracic Surgery,” said Nelson. “I hope that this chair will continue to add luster to the great record of the University of Utah, its medical school and the department of surgery in particular.”

Selzman said that for all of his accomplishments “President Nelson remained resolutely committed to a single, central idea — that our work is to extend and improve people’s lives.

“My fellow colleagues and I are extremely proud to serve in the division that he established,” Selzman said. “We will always be mindful of his vision through pioneering, compassionate and innovative care. President Nelson is and will forever remain the core of our program.”