Accomplishing a feat that had been a pipe dream for decades, scientists have recreated in a test tube the first steps of infection by HIV (human immunodeficiency virus), the virus that causes AIDS (acquired immunodeficiency syndrome). Doing so has provided up-close access to the virus—which is otherwise obstructed from view deep within the cell—and enabled the identification of essential components that HIV needs to replicate within its human host.

Specifically, the scientists were able to monitor the virus as it replicated its genome and inserted it into target DNA, mirroring steps that ordinarily take place within the host. Published in Science on Oct. 9, these advances yield a new understanding of how HIV works, the authors say, allowing for explorations of early stages of the virus life cycle in unprecedented detail. Such knowledge could lead to improved treatments for AIDS, a lifelong disease that can only be kept under control with a continuous medication regimen.

“This is teaching us how HIV infects,” says Wesley I. Sundquist, distinguished professor of biochemistry at University of Utah Health. He is co-senior author of the study with his former trainee, Owen Pornillos, now an associate professor at the University of Virginia. The co-first authors are Devin Christensen and Barbie Ganser-Pornillos. “We are learning new things about one of the most significant pathogens that humans have ever encountered, and that is important.”

For all its danger, HIV is deceptively simple in appearance. The virus resembles a rounded ice cream cone, where an outer shell encapsulates the virus’ genetic material inside. Previously, it had been thought that the main role of the shell, called the capsid, was to protect its precious cargo. But the investigations by Sundquist and Pornillos’ team show that the capsid also plays an active role in infection.

Carrying out initial steps of infection in a test tube allowed the research team to precisely manipulate HIV in ways that had not been possible before. They found that when they used genetic and biochemical methods to destabilize the capsid, HIV could not effectively replicate its genetic material. It was the first direct demonstration that, rather than serving merely as packaging, the capsid is an essential component of the HIV infection process itself.

If seeing is believing, then watching the HIV molecule in action gave credence to the experimental finding. Recent advances in cryo-electron microscopy and molecular modeling have made it possible to see the virus—which, at 130nm, is about 60 times smaller than a red blood cell—in exquisite detail. Using these techniques, the team visualized each of the 240 tiny protein “tiles” that fit together to make the cone-shaped outer shell. With the up-close view, the scientists could literally see that the capsid remained largely intact throughout the replication process, called reverse transcription.

“This is different than in the textbooks,” Sundquist says. “Our data indicate that the viral capsid plays an active and indispensable role in supporting efficient reverse transcription.”

Sundquist says that the discovery may help explain why an investigative HIV drug developed by Gilead, the first to target the capsid, is a potent inhibitor of the virus. Previous work by Sundquist, Pornillos and others elucidating the structure and function of the HIV capsid informed the design of the drug, which has performed well in phase 1 clinical trials. Additional insights gained through the test tube system could improve drug design even further.

Advances in microscope technology, coupled with dogged persistence, led to the new view of HIV, which was first discovered as the cause of AIDS more than 35 years ago. It took years of trial and error to determine the minimum components required for recapitulating the process in a test tube, outside the cell. Now that the simplified system is up and running, Pornillos says, it opens doors to learning more fundamental truths about a familiar foe.

“For me, there is both the fundamental knowledge aspect of it, but also the translational aspect that could help us come up with better ways to stop HIV,” Pornillos says. “That’s why it’s great research.”

The research was published by Sundquist, Pornillos, Christensen, Ganser-Pornillos and Jarrod Johnson from the University of Utah, and published as “Reconstitution and visualization of HIV-1 capsid-dependent replication and integration in vivo.” 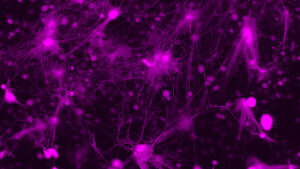 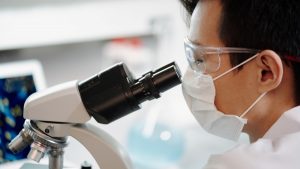 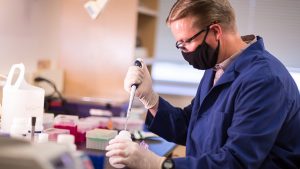 U of U Health celebrates scientific accomplishments
May 11, 2021 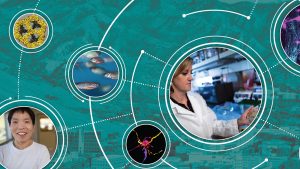