Scientists often practice communicating their research by challenging themselves to explain their work to a child. Recent U graduate Olivia Miller took on that challenge and went a few steps further—explaining her studies of the Greenland ice sheet to the schoolchildren of a Greenlandic village, in the form of a children’s book to be translated into two additional languages. 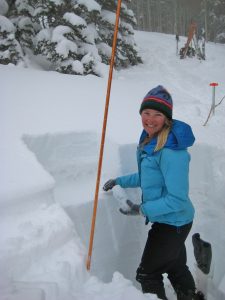 Miller’s book, written as part of the STEM Ambassador Program, ensures that her research reaches beyond her scientific peers to the people most directly affected by the changing ice sheet.

“I do science to contribute to society,” Miller says, “and sharing my work is a part of that.”

Miller, now a hydrologist with the USGS Utah Water Science Center, traveled to Greenland with Geology and Geophysics professor Kip Solomon to study a layer of liquid water inside a large area of Greenland’s ice sheet. Given the extremely cold temperatures at the ice sheet, the substantial amount of liquid water found when drilling through ice presented a scientific mystery. The mystery, and Miller’s team’s effort to solve it, form the story of the book.

Her idea came through discussions with other STEM Ambassadors at the U, each of which was exploring creative ways to bring science into communities. Miller said the language barrier and her tight schedule while in Greenland made it difficult for her to communicate with Greenlanders directly. “I needed something that could be translated and that could be there independent of me,” she says. She planned to write a children’s book that would reside in the school library of Kulusuk, a village in East Greenland.

She hadn’t read a children’s book in some time, however, and spent hours at a bookstore getting a sense of the vocabulary, layout and subject matter. Her friend, child psychologist Celestia Buckley, lent additional tips about how to use Greenlandic cultural elements to help spark the children’s interest. 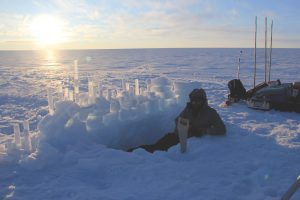 The book (available here) is called “Adventures on the Greenland Ice Sheet.” Photos of the research team tell the story. The book begins with a 2011 expedition to Greenland and shows how the researchers ate, slept and solved problems while camping on the remote ice sheet. Other photos show researchers taking ice cores and show the different layers in the cores that represent different years of snowfall.

“Near the end of their expedition, the team was collecting some of the last ice cores they needed,” Miller writes in the book. “They were close to the edge of the ice sheet near Kulusuk. They had been drilling for a while when all of a sudden, they pulled out an ice core that was dripping with water!”

Illustrations show, in cross-sections of the ice, what the team thinks is happening—that percolating meltwater collects in small spaces between ice crystals in the ice that are insulated from the cold by the overlaying snow. Large reservoirs of water have been detected near the margins of the ice sheet, near the southern tip of the island. 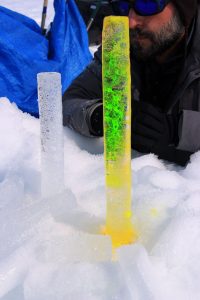 After completing the book, Miller worked with a teacher in Kulusuk to translate it into Danish and Greenlandic. “Unfortunately, I was in Kulusuk over the summer when school wasn’t in session, so I wasn’t able to give it to the kids myself,” Miller says. But the whole village now has access to Miller’s story, through the school library.

Miller hopes that the universal elements of science – excitement, curiosity, teamwork and the beauty of the natural world can connect researchers and the public. Scientists, she says, can draw on those universal elements to highlight how important science is to society.

“That is one way non-scientists can appreciate science, even if they don’t care about all the tiny details of a particular study,” she says. “That is what scientists can draw on to re-cast science as relevant to people.”

Read more about the STEM Ambassador Program here and here.