The Energy and Geoscience Institute (EGI) at the University of Utah, in collaboration with the Utah Geological Survey, has been named a Phase II finalist in the Department of Energy’s FORGE program. FORGE is a competition to host the construction of a $130 million field laboratory for enabling commercial production of geothermal energy from expanded geographical regions in the western United States. EGI’s proposed laboratory site is near Milford, Utah.

This award is no coincidence, says Joseph Moore, principal investigator of EGI’s FORGE team. “This research reflects more than forty years of geothermal research at the University of Utah,” he says.

Geothermal technology harnesses the energy of hot water from deep in the Earth to turn turbines and generate electricity. It’s a renewable, continuous energy source, since the heat in the subsurface of the Earth is constant and not affected by conditions that can diminish the output of solar or wind energy. 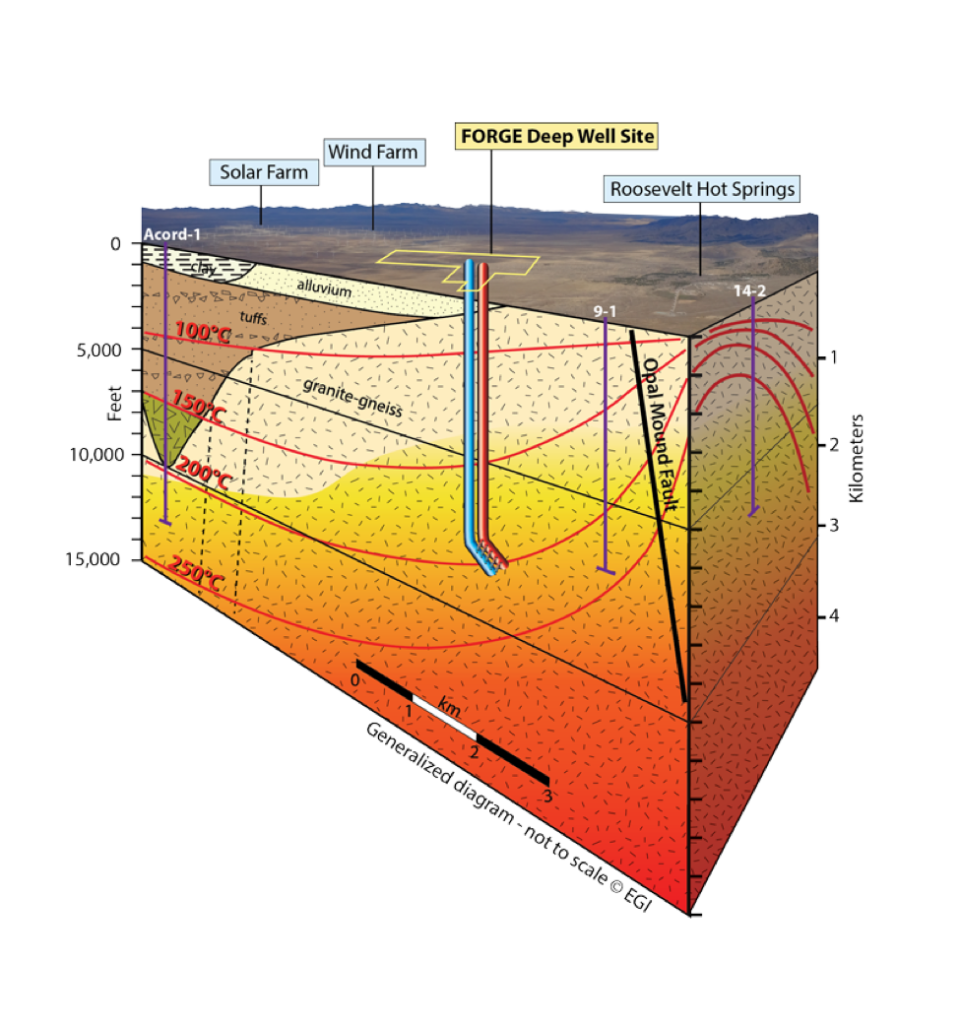 Historically, geothermal energy plants had to be placed in regions where geothermally heated water was accessible, either at the surface or through drilling and pumping. These regions are typically near tectonic plate margins but also occur within continental areas, including Utah and Nevada. Geothermal heat is ubiquitous, however. Drill nearly anywhere on Earth and you’ll feel the heat. The limiting factor controlling where geothermal energy can be developed is the presence of fractures that allow water to circulate through hot rocks several kilometers below the surface. Enhanced geothermal systems (EGS) work around that limitation and open up geothermal energy possibilities to more areas.  The technology opens existing fractures to create permeable flow paths within the hot rocks. An EGS reservoir can be created where there wasn’t one before by drilling a well several kilometers deep and injecting cold water under pressure. This opens already-existing – but poorly-connected – fractures in the rock. A second (or more) well is drilled to intersect these new fractures. When surface facilities are constructed and operational, cold water is injected into the first well, heated as it moves through the fractures and ultimately pumped to the surface through the second well. Heat from the hot water is used to boil a fluid and turn turbines to generate electricity. The cooled water is then returned to the reservoir where it is reheated.

“The heat contained in rock at currently drillable depths is enormous,” says Moore. “Even tapping a few percent of this energy can provide thousands of times the energy needed to power the country. Developing EGS technologies will make geothermal energy available almost anywhere in the world.”

University of Utah EGI researches implemented a similar technology at U.S. Geothermal’s Raft River geothermal plant in southern Idaho. Here, hydraulic and thermal techniques were used to increase the ability of water to flow to an existing well, rather than spend millions of dollars drilling a new well. As a result of this, the well is now in commercial service. Injected water helped open rock fractures to enhance fluid flow. With experience at Raft River under their belt, the EGI team was well-prepared to enter the Department of Energy’s FORGE competition.

FORGE, which stands for Frontier Observatory for Research in Geothermal Energy, is a program to accelerate EGS technology by constructing a fully-operational test site in the western US. Five teams competed in Phase I of the competition, which began in the summer of 2015 and gave the teams the opportunity to present their case as the best site for the FORGE lab. EGI’s proposal was the only one from a university; the other four teams came from national laboratories.

Utah’s proposed site, near Milford, Utah, checks off all of DOE’s boxes. Temperatures reach 175°C at around two kilometers depth. The site has no threatened animal or plant species and no groundwater or surface water resources that would be threatened by the project. Further, the site is on publicly accessible land, compared with some other sites that were located on military installations. Milford also boasts a robust renewable energy infrastructure, with geothermal, solar, wind, and biogas facilities nearby. EGI proposes to circulate non-potable water to avoid using up valuable agricultural and drinking water. The University of Utah Seismograph Stations has been seismically monitoring the area for decades, giving researchers a rich data set to use in characterizing the region’s geology.

Out of the five original teams, the Milford site and a site at Nevada’s Naval Air Station, Fallon, proposed by Sandia National Laboratories, were selected as Phase II finalists. Over the next approximately 18 months, both teams will continue studying aspects of their respective sites and securing necessary environmental permits. In early 2018, DOE will select one site for FORGE development, ultimately investing more than $130 million into site construction and operation.

“We are particularly excited about adding another renewable energy dimension to the Milford energy corridor,” Moore says. “This will bring additional national and international attention to the state and the University.”