Following in her father’s footsteps

Meet the father-daughter duo who graduated from the U and embarked on a path of public service. They hope to inspire others from diverse backgrounds to also run for public office.
Melinda Rogers - communications specialist, University of Utah Communications

With Father’s Day around the corner, Bev Uipi is preparing to enjoy the day with a backyard barbecue in honor of her dad, Phil.  There’s never a shortage of food or family at the Uipis’ Millcreek home for the celebratory Father’s Day get-together — and this year, there will also be no shortage of political talk.

Bev Uipi, a newly graduated alumna of the University of Utah Master of Public Administration program, is in the midst of running for a seat on the Millcreek City Council.  Since her graduation, she’s been pounding the pavement around the newly created city of Millcreek in Salt Lake County to meet voters and gauge input for how to best create a local government for citizens of the community, which held township status prior to last year. 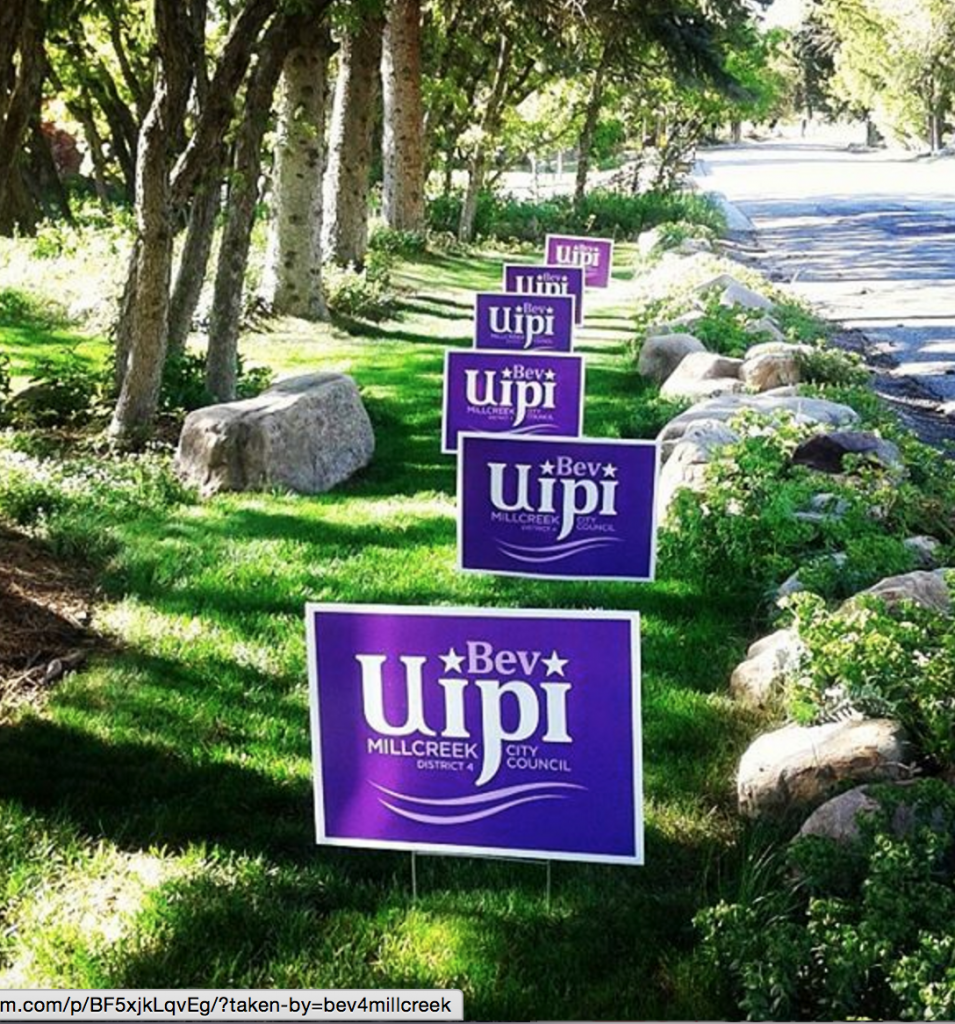 Time spent on the campaign trail is a skill Bev Uipi, 40, learned while growing up in the same area where she’s now running for office.  Her father, Phil Uipi, became the first Pacific Islander to be elected to the Utah State Legislature in 1991, where he served as a Republican in the Utah House of Representatives until 1994. Phil Uipi today recalls he didn’t aspire to hold public office — but followed a road that led him there.

He graduated from the University of Utah S.J. Quinney College of Law in 1986 and became one of few practicing Tongan-American lawyers in Utah, a state where about 1 percent of the roughly 2. 9 million inhabitants are Pacific Islanders, according to the most recent census data available.

Content with building a law practice, real estate brokerage firm and raising a young family, Phil Uipi remembers how one day, a friend pressed him to consider a run for office representing District 36 in the East Millcreek and the Olympus Cove areas of Salt Lake County. He decided to give it a shot, and quickly recruited his family — including daughter Bev, then a teenager and a standout volleyball player at Skyline High School — to work the frontlines of his campaign.  The Uipi family canvassed the area together, meeting neighbors and handing out brochures and fliers. When election day rolled around in November 1991, Phil Uipi made history as the first Tongan in Utah to win a seat in the state legislature.

“At first, I thought that because I was running as a minority candidate in an area like East Millcreek and Olympus Cove — where there wasn’t a lot of diversity at the time — I wondered if I could have a hard time earning community support. As the campaign developed, I found that people were very kind to me and my family.  As we knocked on doors, people were appreciative of the kind of campaign we ran,” said Phil Uipi, recalling his campaign days in the early 90s. “They were impressed with the fact that I worked hard and that my wife and my young children were really involved. I thought that it would be quite a challenge to run for public office in our district, but the good people in our district trusted me and gave me the opportunity to represent them.”

Fast forward to 2016, and Phil Uipi is again knocking on doors, chatting with community members at town hall meetings and making the rounds at neighborhood fundraisers. This time, however, instead of taking center stage to share his own vision for strong local government, he’s stepped aside to be the loudest cheerleader for his favorite candidate in the Millcreek City Council race: His daughter Bev.

The father-daughter duo in recent weeks have campaigned together, often with Bev telling the family’s story of political involvement — and her hope to carry on her father’s legacy — to interested listeners in the community.  Included in the canvassing mix is Bev’s son Xane, 12, who is getting a taste of his mom’s teenage years on the campaign trail with his grandpa. Now with the hindsight she didn’t have as a teen campaigning for her father, Bev Uipi said she’s more in awe of the barriers her father overcame to win his election years ago.

“I’m so proud of my dad,” Bev Uipi said. “I’m humbled by his boldness to go against all odds in Millcreek back then, and his perseverance to serve. To have my dad knocking door to door with me has meant the world to me.”

Phil Uipi admits that he while he’s proud to be a trailblazer and thrilled to see his daughter’s name on the ballot, he wishes more Native Hawaiians and Pacific Islanders would run for office.

Statistics, however, show small but promising progress in regard to that there to the number of Pacific Islanders on the ballots for public office compared to other ethnicities in Utah, according to data compiled by Jake Fitisemanu Jr., a professor in the University of Utah Ethnic Studies Program.

Fitisemanu Jr. has studied demographics through work on the U.S. Census Bureau National Advisory Committee, and through work with the Utah Department of Health Office of Health Disparities, where he compiled and evaluated health demographics for the state. Since January 2016, he has served as manager of the state-run health clinics along the Wasatch front, called the Health Clinics of Utah and has contributed to the Community of Contrasts national demographic report for Native Hawaiians and Pacific Islanders (NHPI). He also authored the 2015 Utah health status demographic report published by the Utah Department of Health.

He said there may be some cultural factors that come in to play when it comes to why Pacific Islanders may not run for office as often as other ethnic groups in the state.

“The problem of infrequent candidacy is incredibly multifactorial, but anecdotes support the notion that for many Samoans and Tongans (the largest NHPI ethnic groups in Utah), there is no long-held history of universal suffrage and governance has traditionally been restricted to exclusive ruling parties of hereditary aristocrats,” said Fitisemanu Jr.  “Voting was only extended to commoners in Samoa in 1990, where communal chiefly government is still the norm. Tonga is a parliamentary monarchy with a limited number of titled nobles and a strong distinction between governing elites and commoners.”

“Becoming citizens, registering to vote, and actually showing up to caucuses and polls is the basic step to mobilizing communities. Overcoming the notion that civic engagement is restricted to traditional ruling parties or social classes is another barrier that needs to be addressed. Increased awareness of the political process is crucial for communities that don’t have a long history of voting or running for office… if your parents don’t know how to vote and have never voted, chances are their children aren’t likely to understand what voting entails,” said Fitisemanu Jr.  “Many small communities including Native Hawaiians and Pacific Islanders may feel that their collective vote is still insufficient to ‘make a difference,’ so we need to educate community leaders and community members that while NHPIs do not form a major voting bloc across the state, our communities can be critical margins of victory in many local races where a small number of votes can swing an election,” he added.

“Ethnic minority communities will gradually take their place in representative government as the children and grandchildren of immigrants and refugees transition communities from ‘house guests’ living in America to ‘home owners’ for whom the USA is their home,” Fitisemanu Jr. said.

Phil and Bev Uipi both said the University of Utah played an important role in helping them to reach their goal of becoming political candidates.  Bev Uipi participated in the Women’s Leadership Institute, an initiative led by former Utah Sen. Pat Jones designed to provide mentorship to women who aspire to public office. Bev Uipi also attended several “Real Women Run,” events, another program spearheaded by the U’s Hinckley Institute of Politics that fosters political ambitions of women. Those initiatives, and her coursework through the U’s Executive MPA program, provided solid tools to develop a framework for good public policy and leadership practices useful for a city council role, she said. Her own work experience includes a stint as advisor to Salt Lake County Mayor Peter Corroon on the county’s Council on Diversity Affairs. She currently serves as senior center manager at the county’s Millcreek Community Center.

Bev Uipi will have competition in a crowded Millcreek City Council race, including some fellow classmates and other University of Utah alumni who are running. (Learn more about the full slate of candidates here).

But for the upcoming Father’s Day weekend, anyway, the Uipis will pause momentarily from the bustle of hanging purple “Vote Bev Uipi” lawn signs around town and talking to constituents to enjoy each other’s company and celebrate the holiday with family.

“I think that it is the wish of every parent that his son/daughter do well and contribute to the community he/she lives in.  Bev is a service oriented person.  She cares about others more than she cares about herself,” said Phil Uipi of his daughter.

Bev Uipi is quick to return the compliment.

“If I can follow in my dad’s footsteps and build on the difference he started making in our community years ago, it will be time well-spent in serving our community,” she said.

[bs_well size=”md”]Ran for office, not elected: