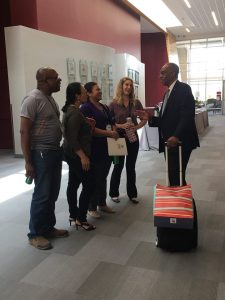 Clifton L. Taulbert was born in the small town of Glen Allan, Mississippi, during the era of legal segregation, where barriers to success seemed endless. Selfless mentors in the community instilled in him a sense of gumption, or what we’d now call entrepreneurial spirit — the idea that hard work, big dreams and tenacity would bring him success. Taulbert took it to heart and became one of America’s prolific entrepreneurs, authors and speakers. He is a Pulitzer Prize-nominated author of 13 books, and was part of the team that popularized the original StairMaster. He is president and CEO of the Freemount Corporation, president and CEO of Roots Java Coffee and shares his entrepreneurial journey with others as a Thrive15.com mentor and speaker.

During the week of May 29, Taulbert gave a keynote address and led discussions with 90 international first-year Fulbright students from 44 countries who attended a four-day seminar on technology commercialization and entrepreneurialism, “Lab to Market,” at the University of Utah, hosted by the Center for Technology & Venture Commercialization. @theU sat down with Taulbert to discuss his philosophy of the entrepreneurial mindset.

You’ve written a lot about the forward-thinking people who raised you in Glen Allan, Mississippi, during legal segregation. How did their entrepreneurial mindset influence the person you are today?

For people growing up in an undeveloped area, or less than privilege background, you assume that where you are is where you’ll always be. I was very fortunate that my community of people were very entrepreneurial. They’ve never heard the word entrepreneurial. That’s a French derivative, and they don’t speak French. They speak Glen Allan-ese.

But they had heard the word gumption, and in my childhood, that was the entrepreneurial mindset. They would tell you that if you had gumption and you had a sense of what that meant — if you were on time, if you worked hard and you never give up — all those things that we now ascribe to the entrepreneurial mindset, that was their definition of gumption.

I was very fortunate that my great aunt, who raised me, worked every day of her life up into her 80s. She didn’t have very much materially, but she had a mindset of success; every person who stayed at her house, every person finished high school, finished college and 80 percent of them went on to get a terminal degree. I mean she was just that influential.

Because I was black, I couldn’t go to the library in our community. I remember distinctively when my great-aunt decide that she had enough of that, she said, “I can’t change the rules of the town, but I’m going to build a library.” She went to the Chinese grocery store, bought six orange crate boxes and painted them a putrid brown color. She placed them on the wall of her house and she wrote to colleges and said, “Send me your old books.”

At the time, everything in Glen Allen came to post office box 145, and she’d open them up and just be delighted and put them in the bookshelves that she had made. But here’s the catch — these books came from graduate schools. I’m 10 years old, and the books are agronomy textbooks. (laughs) I’m serious!  I told her, “I can’t read these books,” and you know what she said? I’ll always remember she said, “If they can write it, you can read it.” And that left me with the understanding to never put yourself on the outside of progress.

She and my uncle who owned the ice house, these ordinary people, had a vision for their children, because for many of them, legal segregation kept them from achieving the goals that they had when they were young. But for those of my generation, we were the pigeon carriers of their dreams. They expected us to do well, and they did everything they could to facilitate that.

This week, you’re speaking to Fulbright students who are at the cusp of their entrepreneurial journey. One of your main messages has been about the “Revival of Inquisitiveness.” Can you elaborate on that idea?

Every human being has been given the gift of inquisitiveness. That’s just who we are; we ask questions. But sometimes those questions are stymied by culture, by parents or even by a company where we might work. But when questions are embraced within an organization or within a set of financers, that’s when you find the answers that you were looking for, or answers that you didn’t even know existed.

Inquisitive minds built the pyramids of Africa and the Golden Gate Bridge. We’ve always had it, but it hasn’t always been on the forefront as it is now. So, what brought it back? It was the global financial crisis in 2007 and 2008. Every average citizen was called to look at what they can do to help the country gain its footing. What can I do to change the social complexities of my country?

All over the world, men and women began to look at themselves individually, and entrepreneurship, as a conversation, took front stage. That’s when I came up with the idea of the revival of the inquisitive mind. Just this conference alone is representative of this being an important field of study. We had students here representing 44 countries from every continent except Antarctica. I mean, the world was here to some degree. We’re talking about a singular topic that can be an advantage to ourselves, to the countries where we live and to the world we call home.

How do you break down the process of harnessing the entrepreneurial spirit into executing an idea for the market?

I began researching the human journey and thought processes; I looked at my own process and talked with other entrepreneurs. I came up with seven guiding steps.

Everyone to a person said my first step was my inquisitive mind. It was my curiosity. I wanted to know why, so I kept asking questions.

It was the asking of questions that led to the second step: imagination. Because imagination distills what I call the plethora of questions in the inquisitive mind. So, imagination began to put purpose to our conversation.

From there you go to the third step: discovery. Now, you distill the idea even further and you start focusing in on what you’re really thinking about.

I called the fourth step the “wow” step for the epiphany. When you get to that epiphany, know you’ve got something. You have an idea that appears to have value, but how do we determine it?

The fifth step is where the lab and the prototype come in. You have something and you’re proving it with a prototype. I remember the original StairMaster that I was involved with. I’ll say it was an ugly machine. It was incredibly ugly, but it worked. You had physiology data behind you that proves what happens to your heart rate as you use this over certain periods of time, and what that can do for your life.

The sixth step has to do with the legalization process. How do I become a legal entity? How do I protect what I’ve done?

Finally, the seventh step, which is really the Holy Grail of innovation, is to get to market.

It’s important to realize that these steps are not like one-two-three-four; it could be months or years in between. You have to understand that even though the steps seem easy to get to. It takes time. It takes commitment. It takes tenacity. It takes perseverance. 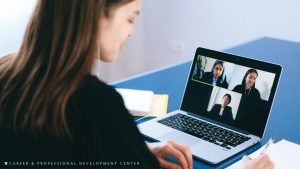 Becoming an Entrepreneur: Passion led me to start my own business
February 8, 2021