A new exhibit at the U’s College of Social Work will bring awareness to thousands of missing and murdered indigenous women. 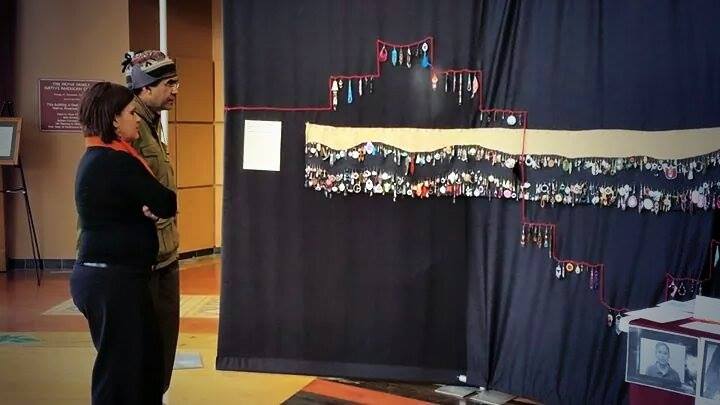 “Sing Our Rivers Red” will be on display at the College of Social Work in March, and features nearly 2,000 earrings, each one symbolizing a victim of gender-based violence against an indigenous woman. Letters from families who donated the earrings are included, many telling the stories of lost loved ones.

The exhibition, part of a larger initiative called “Sing Our Rivers Red,” was started by Tanaya Winder and Hannabah Blue.

Winder is director of the University of Colorado at Boulder’s Upward Bound program and an adjunct professor at the University of New Mexico. Blue works as a public health services project manager and serves on the Board of Directors of Café Cultura, a non-profit organization that promotes creative expression and leadership among indigenous and Latino youth through oral traditions of storytelling, spoken word and poetry.

“Bringing awareness about murdered and missing indigenous women addresses the pervasive ideology that native and indigenous women are not valuable and that they are expendable,” Blue said of the exhibit. “The traveling art exhibit does so much to remind each of us of the women who are lost to this ideology.”

Since 1980, over 1,181 native women and girls in Canada have been reported missing or have been murdered, according to the event organizers.

“There are more than 3 billion women in the world,” said Dena Ned, director of the American Indian Social Work Program at the College of Social Work.  “It’s estimated that one in three women will experience violence in their lifetime. For indigenous and aboriginal women, it’s happening in much greater proportions.”

“Far too often, indigenous women are invisible victims,” Ned said.  “There are few resources to help indigenous women out of violent situations, so they go missing and their families have no idea where they’ve gone.” Ned explains the “Sing Our Rivers Red” exhibit has been on her mind since she initiated a contribution of donated earrings for the exhibit from U students, faculty and staff.  When she saw the completed exhibit, she wanted to bring it to Salt Lake City.

“This is not just an indigenous issue. This is an issue of justice,” said Ned.

The exhibit will be open to the public on Friday, March 25, beginning at noon.  The film “Highway of Tears” will be screened at 4 p.m, which will be followed by a panel discussion.  The exhibit, film screening and panel discussion will all be held in the College of Social Work’s Okazaki Community Meeting Room (155-B).

The event at the College of Social Work is held in conjunction with Women’s Week activities at the school.