The University of Utah’s Department of Theatre opens the season 2019-20 with Frank Wildhorn’s “Dracula, the Musical,” a thrilling drama of suspense and unrequited love that will bring the undead to life. Directed and choreographed by Musical Theatre Program Head Denny Berry, the production runs Sept.13-22, 2019, at the Marriott Center for Dance. An ASL-interpreted performance on Sept. 21 at 2 p.m. 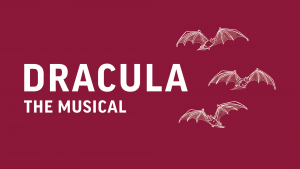 “Dracula, the Musical” is a thrilling drama of suspense and a Gothic romance of dreamlike temptation based on the world-famous novel by Bram Stoker, from the extraordinary team of Christopher Hampton, Don Black and Frank Wildhorn (“Jekyll and Hyde” and “The Civil War”).

Set in Europe at the end of the Victorian era, the story follows Count Dracula, played by Musical Theatre Program senior Chase Quinn, as he lusts for new blood from Transylvania to England. Jonathan Harker and Mina Murray fall victim to Dracula's unnatural charm, and along with Dr. Van Helsing, must fight Dracula's supernatural powers.

“Dracula, the Musical” at a glance

Free parking is available to the south of the theatre and at Rice-Eccles Stadium.

Get tickets via phone at 801-581-7100, online at tickets.utah.edu or in person at the Performing Arts Box Office, located at Kingsbury Hall.