As Congress continues discussions on major criminal justice reforms —including changes to mandatory minimum sentences involving nonviolent drug offenders through the Smarter Sentencing Act —research by a University of Utah law professor is serving as a tool to guide the debate.

Shima Baradaran Baughman authored “Drugs and Violence,” which was published in the Southern 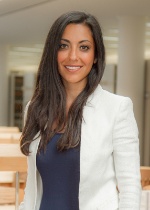 Shima Baughman, an associate professor at the S.J. Quinney College of Law

California Law Review. The research is part of current discussions in Washington D.C. related to the Smarter Sentencing Act, which aims to give federal judges more discretion in how to sentence offenders convicted of non-violent drug crimes. The legislation is currently co-sponsored by U.S. Sen. Mike Lee and could be discussed in Congress in coming weeks.

Baughman’s research is useful in the heated debates over the Sentencing Act. In recent testimony before Congress, the Drug Enforcement Administration asserted that drug trafficking poses serious threats due to the violence that accompanies it, and another commentator testified that simply releasing 1 percent of federal prisoners would lead to over 32,000 more murders, rapes and other violent crimes. According to Baughman’s research, these claims are not justified.

In a newly published analysis this week titled “The Drug-Violence Myth: Why Linking Drugs and Dangerousness is Wrong,” Baughman outlined the reasoning behind her conclusion that there is not solid proof that drugs lead to more violence —a major factor that should be considered in revamping public policy for sentencing mandates.

“Most drug offenders commit nonviolent offenses and at low rates. Though certainly drug addicts commit more crimes, they commit them at low rates, and the connection between drugs and violent crimes is complex and not conclusive,” Baughman said.

Baughman’s research points to a 1997 survey of prisoners, which found that only 12 percent of federal drug offenders were convicted of a violent crime. And against common perception, prisoners incarcerated for violent offenses do not generally commit violent crimes for drug money.

“At best, the connection between drugs and violence is uncertain. Indeed, studies have pointed out that forces of violence are not caused by drugs but may come from economic hardship, poor intellectual capacity, an aggressive temperament, or other personality disorders,” Baughman said.

“The link between drugs and violence forms the foundation of U.S. drug policy and underlies federal and state case law and statutes. Politicians, courts, media and scholars continue to advocate this view either explicitly or implicitly. Courts assert that drugs cause violence and crime. Statutes rely on the presumption that drugs cause violence, and defendants are punished more severely based on this presumption,” said Baughman. “Unfortunately, despite my empirical evidence and other studies debunking the drug-violence connection, courts and legislators continue to perpetuate the myth that drugs and violence are closely connected. This unsupported connection leads to a loss of important constitutional rights, trumped up mandatory sentences, and disproportionate increases in incarceration for non-violent defendants who pose little threat to public safety. The entire framework of federal and state drug statutes must be reworked to remove the many presumptions that drugs cause violence.”

Baughman’s research comes in the wake of recent changes in which the Department of Justice stopped pursuing mandatory minimum sentences for nonviolent drug offenders. This year, the U.S. Sentencing Commission voted to reduce sentences for most federal drug offenders retroactively, potentially allowing 46,000 inmates to obtain slightly shorter sentences by the end of this year.

With over 6 million Americans under supervision in state and federal prisons and jails, Baughman viewed the move as a positive step, but she noted the move is not going to be the end of U.S. mass incarceration.

To read Baughman’s analysis in its entirety, click here.

Baughman is available for interviews on the subject.