When viruses infect the body’s cells, those cells face a difficult problem. How can they destroy viruses without harming themselves? Scientists at University of Utah Health have found an answer by visualizing a tiny cellular machine that chops the viruses’ genetic material into bits. Their research shows how the machine detects the intruders and processes them for destruction to protect cells and prevent the spread of infection. 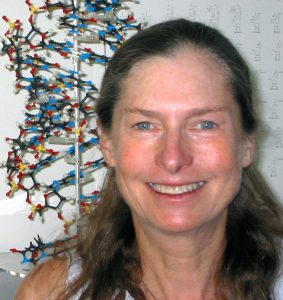 “Fighting viruses is essential for survival,” says Brenda Bass, distinguished professor of biochemistry at U of U Health who co-led the study with assistant professor Peter Shen. “It is fascinating to see how biology has evolved to solve this problem.” Their findings were published online in the journal Science on Dec. 21.

Bass, Shen and their colleagues examined one such specialized machine, a protein from the common fruit fly, Drosophila melanogaster. Now that scientists know how the fly protein works, they may be able to use some of the same tricks to overcome viruses that cause human disease.

At first glance, the “L”-shaped protein, aptly named Dicer, doesn’t look like anything special. But put it next to virus, and its machete-like properties spring to life. Viruses spread infection by replicating and copying their genomic material inside the cell, and during this process make double-stranded RNA (dsRNA). Dicer rids the cell of the offending intruder by grabbing hold of the rope-like dsRNA, chopping it into pieces as it reels it in.

One small difference between viral and cellular dsRNA is responsible for giving the virus away as an unwanted intruder. The ends of the strands of viral dsRNA are even, while one strand of cellular dsRNA is a tad longer than the other.

“Dicer has to be careful about what it destroys because otherwise it would shut down the cell,” explains graduate student and first author Niladri Sinha. “Seeing how Dicer works answers a long-standing question of how antiviral-receptors can discriminate between ‘self’ from ‘non-self.’”

This property is important for more than one reason. As a part of normal cell function, Dicer slices dsRNA made by the cell, too. For the first time, this study shows that this single machine processes dsRNA from viruses using a completely different mechanism. 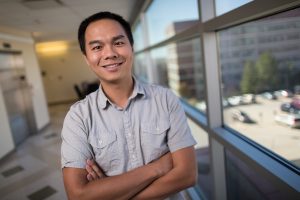 In a way, this new view of Dicer has been nearly 20 years in the making. When Bass first started investigating the protein, she noted it had a region known as the helicase domain. But for all those years, no one knew why. It was pure curiosity that led her to collaborate with Shen to determine whether seeing the protein could help them answer that question.

To do so, they flash-froze and analyzed Dicer using cryo-electron microscopy, this year’s Nobel Prize-winning technology. Despite using advanced methodologies, it was not easy to get a picture of the protein interacting with viral RNA. Dicer is tiny even by cryo-EM standards. Plus, it bends and moves, making it difficult to pin down.

The scientists overcame these difficulties by using biochemistry to trap the pair in defined poses and then taking hundreds of thousands of images. They discovered that the mysterious helicase domain defines the previously unknown mechanism for destroying virus: it recognizes the intruder and reels it in just before the kill. Importantly, once the helicase grabs hold of the viral material, it doesn’t let go, improving its chances for eradicting infection.

“What I love about this is that we had no idea how the enzyme was working. Just by looking at it, we came upon something unexpected,” says Shen.

It’s possible that Dicer only functions this way in flies. But biology has a habit of reusing tools that work well. “I’m sure people will be thinking that perhaps under certain conditions, or in the presence of additional protein factors, human Dicer could act like the fly’s.” Such a discovery could give scientists new ways to control viral infection, and our body’s response to infection.

This research was supported by funding from the National Institutes of Health and the H.A. and Edna Benning Presidential Endowed Chair, and will be published as “Dicer uses distinct modules for recognizing dsRNA termini” in Science on Dec. 21, 2017.