On Monday, August 13, the computer graphics world honored 52 people as inaugural members of the SIGGRAPH Academy. Each played a role in bringing graphics from their beginnings as arrangements of glowing lines to the immersive 3D worlds that moviemakers, game designers and others build today. Seven of those 52 were alumni of the University of Utah. And one was the “father of computer graphics,” former professor Ivan Sutherland.

In that and other sessions of the 2018 conference of SIGGRAPH (the Special Interest Group on Computer GRAPHics and Interactive Techniques of the Association for Computing Machinery), Sutherland’s students and colleagues unfolded his impact on the students who came through the computer science department at the U during his tenure as a professor, from 1968 to 1974. Those students then passed those impacts on to the world as founders of companies including Pixar, Adobe and Netscape. (See below for a full list of alumni inducted into the SIGGRAPH Academy, along with their citation and dates of graduation from the U). 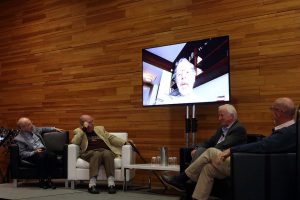 In a morning panel discussion session moderated by alumnus Henry Fuchs, Sutherland and his colleagues told the story of developing a head-mounted graphical display at Harvard University in 1968 – the forerunner of today’s virtual reality systems. “Don’t think of that thing as a screen,” Sutherland said, “think of it as a window. Through that window, one looks into a virtual world.”

An evening reception featured tributes to Sutherland from former students including Bob Sproull of the University of Massachusetts Amherst and U alums John Warnock, Alan Kay, Henri Gouraud and Ed Catmull.

“I feel very proud and fortunate to know and have learned from all of the University of Utah graphics greats who were inducted into the SIGGRAPH Academy,” said Johnson, whose research is in scientific visualization. “I have enjoyed getting to know all of these amazing people during my career at Utah.”

Catmull, president of the Pixar and Walt Disney animation studios, described the environment that Sutherland and Evans created to foster innovation at the U:

“What I took away from Utah more than anything else was this environment where students all worked together,” Catmull said. “They were all building on each other, and expected each other to build it and keep on move forward.”

The early legacy of entrepreneurship continues today, according to Ross Whitaker, director of the School of Computing. In recent years, U computing alums have launched tech startups including Glympse, Pixio, ViSOAR and AtlasRTX.

“If I’ve had any success,” Sutherland said at the reception, following Catmull, “it’s not because I’m a smart fellow. It’s because I had smart friends.”

University of Utah alumni and faculty inducted in the SIGGRAPH Academy

Ivan Sutherland — For Sketchpad and for providing a vision for computer graphics that has sustained the field.

James Blinn (Ph.D., 1978) — For pioneering work in rendering and educational animation, and for exemplary contributions as an author.

Henry Fuchs (Ph.D., 1975) — For contributions to augmented and virtual reality, telepresence and graphics hardware, and for educating the leaders in the field of computer graphics.

Watch the panel discussion on the development of Sutherland’s 1968 head-mounted video display:

Watch the reception discussion of Sutherland’s impact on the U computer graphics program and on its alumni:

See additional photos from the SIGGRAPH conference here and the Sutherland reception here.