Scientists already know that the venom of cone snails, which prowl the ocean floor for a fish dinner, contains compounds that can be adapted as pharmaceuticals to treat chronic pain, diabetes and other human maladies. But the cone snails’ venom has more secrets yet to be revealed. In a new study published in Science Advances, researchers report that a group of cone snails produces a venom compound similar to the hormone somatostatin.

While they continue to learn more about this venom compound and its possible pharmaceutical applications, the results show the wide variety of drug leads that venomous animals produce,  designed and refined over millions of years.

“Cone snail venom is like a natural library of compounds,” adds Iris Bea Ramiro of the University of Copenhagen. “It is just a matter of finding what is in that library.”

Find the full study here. This research was funded by the U.S. Department of Defense, a Villum Young Investigator Grant, the Department of Science and Technology—Philippine Council for Health Research and Development, USAID and the Benning Society.

The story begins in the Philippines, on the island of Bohol where Ramiro grew up. Although she and most Boholanos didn’t encounter cone snails often except for finding shells on the beach, fishermen knew how to find and catch the venomous snails, which are often sold to shell collectors and are sometimes eaten. One fisherman told Ramiro that his parents warned him to avoid eating a bean-like organ in the snail.

“The bean-like structure is actually a bulb that is connected to the gland where venom is produced,” Ramiro says.

Some cone snails are fish hunters. Some of those use a “taser-and-tether” hunting strategy, shooting a barbed hook into a fish and delivering a jolt of venom that chemically electrocutes and paralyzes the fish. Others use a net hunting strategy, releasing a cloud of venom into the water with compounds that leave the fish sensory-deprived and disoriented.

An example of the “taser-and-tether” hunting strategy of the Conus bullatus snail.

Of the estimated eight groups of fish hunting cone snails, though, only half have been extensively studied. Among the least-studied lineages are the Asprella cone snails. They’re not shallow-water snails, like some others. They like deeper waters, at depths of 200-800 feet (60-250 m), and have been less accessible to scientists. 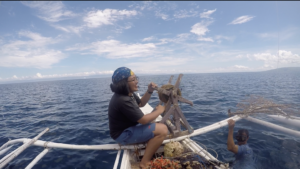 Bea Ramiro during fieldwork in the Philippines.

As a graduate student at the University of the Philippines, Ramiro began studying Conus rolani, a species of Asprella snail. “No one in our lab was working on it at that time,” she says. “I was just looking to identify any small peptide (chain of amino acids) from the venom of C. rolani that had unusual or interesting activity in mice.”

She found one. A small peptide from the venom caused mice to act sluggishly or unresponsive. But it was slow-acting, hardly the expected effect since other cone snails produced venoms that acted almost immediately. It had a few similarities to the hormone somatostatin (more on that later) but not enough to say conclusively that the venom peptide and the human hormone were functionally related.

While exploring how and why the venom worked, Ramiro made a visit to the University of Utah, a hub of cone snail research.

Cone snails at the U

Far from the glittering waters of the Pacific, U researchers have been studying cone snails and their venom since 1970, when Baldomero “Toto” Olivera arrived in Salt Lake City, bringing the cone snail research he’d begun in his native Philippines. 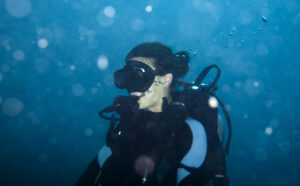 Decades of study have provided an abundance of information about how venom compounds interact with the bodies of prey fish, including how the venoms interact with receptors in the body and overwhelm natural biochemical processes. Olivera and his colleagues investigated whether those effects could be employed as pharmaceuticals in humans. One effort yielded a pain medication, Prialt. Another, in which Safavi played a leading role at the U as an assistant professor, investigated how insulin analogs produced by cone snails might be adapted as a fast-acting insulin for people with diabetes.

“Somehow cone snails take some of their hormones and turn them into weapons,” Safavi says. So she and other researchers helped Ramiro compare the peptide she’d found, now called Consomatin Ro1, to known human proteins.

Frank Whitby, a research associate professor in the Department of Biochemistry, used X-ray crystallography to determine the structure of Consomatin Ro1. “This was an important contribution because it showed that Consomatin Ro1 does not resemble somatostatin but rather resembles a drug analog of somatostatin called octreotide,” says Christopher Hill, distinguished professor of biochemistry.

Meanwhile the research team also worked with local fishermen off Cebu, an island near Bohol, to bring Asprella specimens to the lab to observe their behavior and learn more about their biochemistry.

It took a year, Ramiro says, to confirm that the peptide that she’d originally isolated from the C. rolani snail activates two of the five human receptors for somatostatin “with unique selectivity,” she says.

“Then,” Safavi says, “we really wanted to understand what it’s doing and how it could be better than somatostatin.”

Somatostatin is a hormone that, in humans and many other vertebrates, is generally an inhibitor—kind of a wet blanket. It’s the main inhibitor of growth hormone, and can be used to treat the excessive growth disorder acromegaly. It also inhibits hormones in the pancreas and signals of pain and inflammation.

“So it’s this hormone that has many, many different functions in the human body,” Safavi says, “But it’s always blocking something. And because of that, it had been an interesting hormone for drug development for some time.”

How can a hormone like somatostatin work as a weaponized venom, especially when it acts slowly? The best way to understand that, the researchers say, is to look to another predator with a slow-acting venom: the rattlesnake.

Rattlesnakes, vipers and cobras have developed a hunting strategy to protect themselves against dangerous prey that could possibly fight back. The snakes strike, injecting their venom, and then retreat. They then wait and follow their prey until the venom takes its full effect and the prey is dead or nearly dead and safe to approach and eat.

Observations of cone snails in tanks showed similarities to the rattlesnakes’ strike-and-release hunting strategy. After injecting venom, the snails would wait, sometimes up to three hours, before delivering a second injection and waiting again.

“And only when the prey is really incapacitated and unable to swim, they come and eat it,” Safavi says. “If you don’t catch the prey immediately, you have the advantage of just waiting until the prey can no longer move. That’s particularly important if the prey can fight back.”

Watch how this “strike-and-release” strategy plays out as Conus neocostatus snails interact with a fang blenny that vigorously fights back.

How does a venom component that mimics somatostatin help with that strategy? It’s still unclear. The study showed that Consomatin Ro1 can block pain in mice with efficiency similar to morphine, and it may be used to block pain so that prey doesn’t know it’s been struck, Safavi says. Different species of fish hunters may use these toxins for different purposes.

As a somatostatin analog, Safavi says, Consomatin Ro1 is structured “as if it was designed by drug makers.” The molecule is short, stable and efficient in the receptors it targets.

That’s likely a reflection of the process of evolution. Cone snails likely began using their own somatostatin in venom and then, through generations of trial and error, refined the compound for maximum effectiveness. That’s an advantage for us, since the biology of fish and humans is similar enough that a compound that’s highly effective in fish will likely be effective in humans.

It’s yet to be seen whether Consomatin Ro1 is more effective than somatostatin analog drugs already on the market that treat growth disorders or tumors.

“The advantage with the cone snails, though, is that there are so many species,” Safavi says. “And we know that many of these species make somatostatin, so the chances of finding the best analog might be pretty high.”

Next, the research team wants to investigate the origin of Consomatin Ro1 in snails, as well as better understand the potential of the compound as an anti-inflammatory or pain reliever. They’ll also look to see if modifications to the compound could make it even more useful.

The results show how venomous animals can turn a hormone into a weapon and suggest that the range of biochemical tools in venom might be broader than previously thought.

“There’s evidence that viruses also turn hormones into weapons,” Safavi says. “We can spend a lot of time trying to design good hormone drugs, or we could try to look at nature more often. And I think if we did the latter, we might be more successful or we might be faster in our drug development efforts.” Safavi will continue this work when she returns to the U as an associate professor of biochemistry in summer 2022.

“This gives insight to the development of next-generation therapeutics,” says Hill. “More generally, this is a great example of how evolution in the natural world has already developed drug-like natural products that have great potential to improve human health.”

“Discovering new peptides from the cone snails is fun and exciting but it could be a long and difficult journey,” Ramiro says, adding that the integration of various disciplines including biology, biochemistry and pharmacology have made this study successful. “There is still so much we can find, discover and learn from the cone snails and their venom.”