The excitement outside the Jon M. Huntsman Center on Thursday, May 3, was almost palpable as thousands of graduating seniors lined up to celebrate with family, friends and fellow students — the culmination of countless hours of homework, cramming for tests and late nights spent writing papers.

Hundreds of university faculty and staff joined the 149th general commencement ceremony as the U honored the largest graduating class in its history with 8,568 students.

Somali refugee Hodan Abdi, who graduated with a major in chemistry and emphasis in biology, was chosen as the student speaker. Watch here and read the transcription of Abdi’s speech below.

Ben Nemtin, No. 1 New York Times best-selling author of “What Do You Want to Do Before You Die?” and star of MTV’s “The Buried Life,” gave the keynote speech. Watch it here and click here to watch Nemtin’s Salt Lake City bucket list video. Read the transcript of his commencement address below.

Watch the presentation and conferral of Baccalaureate degrees and certificates by the academic deans here. 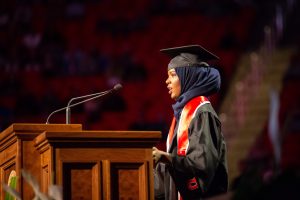 Good evening, President Watkins, distinguished guests, dear faculty, graduates, family and friends. I am very delighted to be here on this special occasion. Congratulations to us, the graduating class of 2018!

It has been a long journey for me to be with you here tonight. At the age of 13, I fled Somalia with my family to an Ethiopian refugee camp to escape a brutal, seemingly endless civil war. Due to the ongoing conflict in my country, I did not get the chance to go to school until I arrived at the refugee camp. When I arrived, I was placed in the sixth grade. It was intimidating for me at first, but I managed to thrive and finish middle school with top scores. My time in the refugee camp was one of the most challenging periods of my life, but I really liked going to school and learning new things every day.

When I was in the 10th grade, we got an opportunity to move to the United States, although we left everything behind. Since I was already 18, I was told that I could not attend high school, and I had to start working. So, I began working as a custodian for the University of Utah to support my family. While working, I took the GED test and earned a high school diploma. I started college eager to take my first premed chemistry class, but first I had to take introductory reading and writing classes. I did so poorly on my first reading test that I was worried about whether I could handle college-level coursework. But, I made sure I attended office hours and got all the help I could. With the support of my mother, who struggled along with me and who always encouraged me to persevere, I was able to continue working toward my goal of becoming a doctor. 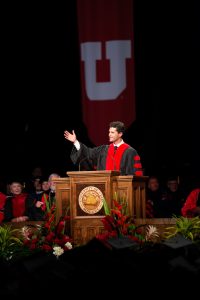 Thank you President Watkins for that warm introduction. Thank you students, parents and the Board of Trustees. I am elated and truly honored to be here speaking to you tonight. First and foremost, to the graduating class of 2018, congratulations! You made it! I feel privileged to be here tonight, and this experience has already taught me a lot. I’ve learned that I need to wear more robes. They are more comfortable than sweats.

At this point in my life, I only know five things. Actually, I know more than five things, but there are five things that I live by, and it all started with a bucket list. You see, I had just graduated high school, and I was so happy. I was happy because I had just graduated. I was happy because I had a scholarship to a great university. But the main reason I was happy was because I had just made the U-19 national rugby team, and this was my biggest dream. Where I grew up on the west coast of Canada, rugby is a huge sport. Right, it’s the third biggest sport, behind hockey and hockey. And, I played the fly half, which is like the quarterback and the kicker in one position, and I put a lot of pressure on myself to succeed. And, as we were training for the World Cup in France I started worrying about my field goals. I thought, ‘What if I miss an easy kick right in front of the goal posts?’ What if I ruin this once-in-a-lifetime opportunity?’

Now, these worries would creep into my mind at night in the form of anxiety, and this anxiety caused me to lose sleep, and all of this caused me to slide into a depression. Now, this was something I had never experienced before. I was a happy-go-lucky guy with a great group of friends, and all of a sudden my anxiety stopped me from going to school, and it stopped me from going to rugby practice. I dropped out of university, and I got dropped from the rugby team. I became a shut-in in my parents’ house, unable to leave. Now, these feelings lasted for months until my friends insisted that I join them to live and work in a new town for the summer. Only then did I start to feel like I was coming out of my fog. I got a job and I started talking about how I was really feeling for the first time. I also met inspiring young people that were starting their own businesses and traveling the world. And, after that summer I made a decision to only surround myself with people that inspired me. I didn’t know it then but that one small decision would completely change the rest of my life.

So, when I got home, I thought about which of my friends were inspiring and one kid came to mind. His name was Jonnie, and I only knew two things about Jonnie. No. 1: He was a self-taught filmmaker, and number two: He took my sister to prom. So I was conflicted about whether I should reach out to him. But I did, and I said, “Jonnie, let’s make a movie!” And he liked the idea, and we brought Jonnie’s friend Dave and Jonnie’s older brother Duncan into our amateur movie mission. The problem was, we had no idea what we wanted to make a movie about. There were a lot of things we wanted to do, but for some reason, we had never done any of them.

CONQUERING THE IMPOSSIBLE
May 6, 2018