Identifying as a Sikh Punjabi American woman in medical school makes Harjit Kaur incredibly unique. There aren’t many people who look like her in her classes and even fewer who have had similar life experiences. But instead of letting that be a barrier, Kaur has embraced her diverse background and is using it to help pave a path for others. She is one of four co-hosts of the podcast, “Bundle of Hers.” 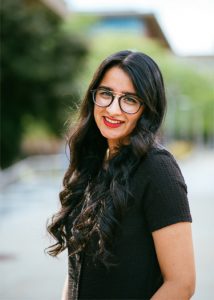 Harjit Kaur, fourth-year medical student at the U and co-host of the “Bundle of Hers” podcast

“In my first year of medical school I started to find community,” said Kaur. “What that meant to me was trying to find people I shared the same values with and who cared about the societal pressures this world carries when it comes to identities.”

Kaur became close friends with three other underrepresented women: Bushra Hussein, a first-generation Somali American; Leen Samha, a Palestinian American; and Margaux Miller, a Czechian American. One day while studying in the library and having one of their normal lively conversations about the world and medical school, a producer from University of Utah Health’s Scope Radio asked if they’d be interested in creating a podcast for medical students.

“It felt like such a great opportunity to make our voices count,” said Kaur. “We decided to call it ‘Bundle of Hers’ because it’s a play on words from the ‘bundle of his’ which is an electrical system in the heart. Each week we talk about topics that are underrepresented in medicine and give our diverse perspectives on topics ranging from food insecurity and body image issues to Islamophobia.”

Kaur has done a lot of critical thinking on issues of diversity and adversity. She was born in Punjab, India, and her family immigrated to West Valley City, Utah, when she was 3 years old so her parents could find better work. Neither of her parents had gone to college and she and her sisters weren’t expected to either.

“Culturally, there is a lot of pressure to have a son,” said Kaur. “My parents struggled because they wanted their daughters to go to school but they also believed that we had certain duties like learning all of the housework and getting married. My sisters and I knew that getting an education was going to give us the tools and opportunities to change that cycle and the paradigms we were born into.” 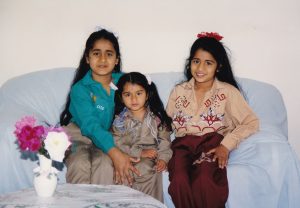 Kaur (center) and her older sisters Dr. Sarbjit Kaur (left) and Dr. Manpreet Kaur (right) who also attended the U.

Starting in elementary school, Kaur and her sisters all especially loved STEM classes. Kaur said she thinks it helped that science, technology, engineering and math classes didn’t require as much knowledge of the English language as other classes.

“Even though we picked up the language quickly, we were still seen as immigrants, so we were placed in English as a second language classes,” said Kaur. “I didn’t understand why because I spoke English and took the highest levels of English classes. I eventually tested out, but it really impacted me and made me lack confidence even when it came to taking my MCAT.”

Kaur said she took the MCAT four times because her “verbal reasoning” score kept falling below the minimum requirement for many universities. But once she passed, she was able to attend the U for medical school. Of course, prior to that, she had to earn an undergraduate degree. For that, she credits the Utah Opportunity Scholarship.

“My parents couldn’t afford to send any of us to college,” said Kaur. “My older sisters got scholarships to the U, so I applied for them too and I ended up being able to go and major in biomedical engineering.”

While earning her undergraduate degree, Kaur learned to think critically about her life and the systems that got her to where she was. She realized the main reason she ended up in college while many of her classmates from West Valley City didn’t was because she had her sisters to work toward a shared goal with. Her siblings were her first sense of community and belonging, and she wanted to create that same environment for others.

“Since West Valley City is one of the most diverse cities in Utah, I think we learned at a very young age how important it is to spend time with people with many different perspectives and to build community,” said Kaur. “Even though there weren’t many other Punjabi Americans, there were other people of color and other immigrants so I had people who understood me and who I could relate to.”

She got involved with the Center for Ethnic Student Affairs, helped create Student Leaders in Diversity Empowerment and co-created Students Achieving in Academia and Engineering (SAAE). Through SAAE, she and two other U students would teach a different topic each week and do a fun activity such as marshmallow towers for civil engineering. They also taught important life skills such as public speaking.

“A lot of barriers exist for students that are underrepresented, but I think many of those barriers come down to a person’s lack of confidence and belief that they can do and achieve more,” said Kaur. “Some people grow up knowing their voice matters, while others from communities that are disenfranchised or marginalized, they inherently feel like their voice doesn’t matter. But everyone wants to be seen and feel heard and have a sense of community, so that was my goal with the engineering program and it’s my goal with the podcast as well.”

Now in its third season, “Bundle of Hers” has more than 60 episodes and all four hosts are in their fourth year of medical school. They’re applying for residencies all over the country and while they don’t know what the future of the podcast looks like, Kaur is confident each of them will continue to be outspoken leaders and advocates for change.

“I’m so grateful for the U and the classes that have taught me the power of mentorship and helped me shape my own story and use my voice,” said Kaur. “Education doesn’t only give us knowledge; it also gives us the confidence and skills needed to effectively communicate with others so future generations don’t have to go through the same things we had to. I hope to encourage others to find a community that will build them up to give them the strength to use their voices for progress.” 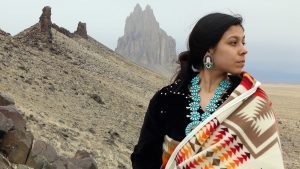 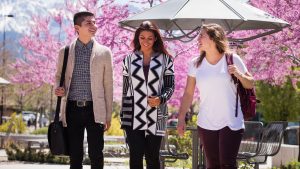