Northern Utah was jolted awake Wednesday morning by a magnitude 5.7 earthquake near Magna—the strongest in Utah since 1992. The primary details of the quake, and subsequent updates, are here. Let’s dig more into the nuts and bolts of this earthquake.

It’s possible, but not expected, that a larger quake will follow this one—the probability of such is small. “Historically most earthquake sequences don’t unfold like that,” said Keith Koper, director of the University of Utah Seismograph Stations, in a press briefing. Typically a primary quake is followed by a sequence of smaller aftershocks—which in the case of today’s earthquake may last for weeks to months. If an initial quake is followed by a stronger one, the first quake is considered a foreshock. But, Koper emphasized, such a chance is small and diminishes with time.

The underlying geology has a lot to do with the character of the earthquake. This quake occurred on a normal fault, meaning a place where tectonic forces are stretching the rock apart. In this type of environment,  faults aren’t capable of producing a quake larger than about a magnitude 7.5. Higher magnitude quakes happen on thrust faults, where rocks are being shoved together and piled up. These kinds of faults can be found along the edges of the Pacific Ocean, sites of some of the world’s strongest earthquakes.

California’s famous San Andreas fault is another type entirely—a strike-slip fault in which rocks slide past each other. Strike-slip faults like the San Andreas can also produce earthquakes larger than magnitude 7.5. Learn more about the different kinds of faults here.

Normal faults tend to produce shallow quakes like Wednesday’s—and shallow quakes mean stronger shaking at the surface, especially at the epicenter. Koper said that the geology of the Salt Lake Valley, which is full of loose sediment from an ancient lakebed, may have amplified the shaking.

“It’s a weak material,” he said, and the seismic energy is amplified as it pulses through the sediment. “It acts like a bowl of jelly.” The same kind of soft sediment enhances seismic shaking in places like Mexico City, Los Angeles and Kathmandu, Nepal.

The reported magnitude is not the classic Richter scale—it’s called a “moment magnitude” and is a measure of the work done by the movement of the ground. Each increase in number is an exponential increase in energy, such that a magnitude 7.0 earthquake, which would qualify as a major quake, would release around 40 times more energy than a magnitude 5.7.

Quake intensity is also reported according to the Modified Mercalli scale, which measures how much shaking is felt and how much damage results. Wednesday’s earthquake comes in at a VI on this scale (which goes up to X)—felt widely, but damage slight or negligible in well-built buildings and moderate in older or poorly-built buildings. Find status updates of buildings at the University of Utah here.

If you felt the earthquake or any of its aftershocks you can document your experience through the US Geological Survey’s Did You Feel It site. Geologists can use people’s reported experiences to help map the intensity of the shaking and better understand how seismic waves affect populated areas.

Now is a great time to assess your personal emergency preparedness. Because of the hazard posed by the Wasatch Fault, the State of Utah has made available myriad resources to help you and your family prepare for future seismic events. Find them here.

Learn more about the earthquakes detected by the University of Utah Seismograph Stations by visiting their website, quake.utah.edu. 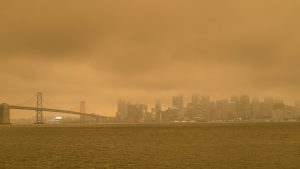