Writer and activist Mia McKenzie, aka Black Girl Dangerous, will speak at the U Jan. 19. Learn more about her work, and submit your questions by Dec. 31.
Janelle Hanson

Writer and activist Mia McKenzie, who goes by the pen name Black Girl Dangerous, will be at the University of Utah for a moderated Q&A discussion on Tuesday, Jan. 19, 2016, at noon in the Union Saltair Room. Her appearance, “A Conversation with Black Girl Dangerous” is part of the 2016 Martin Luther King Jr. Celebration Week, to be held Jan. 19-23, 2016. 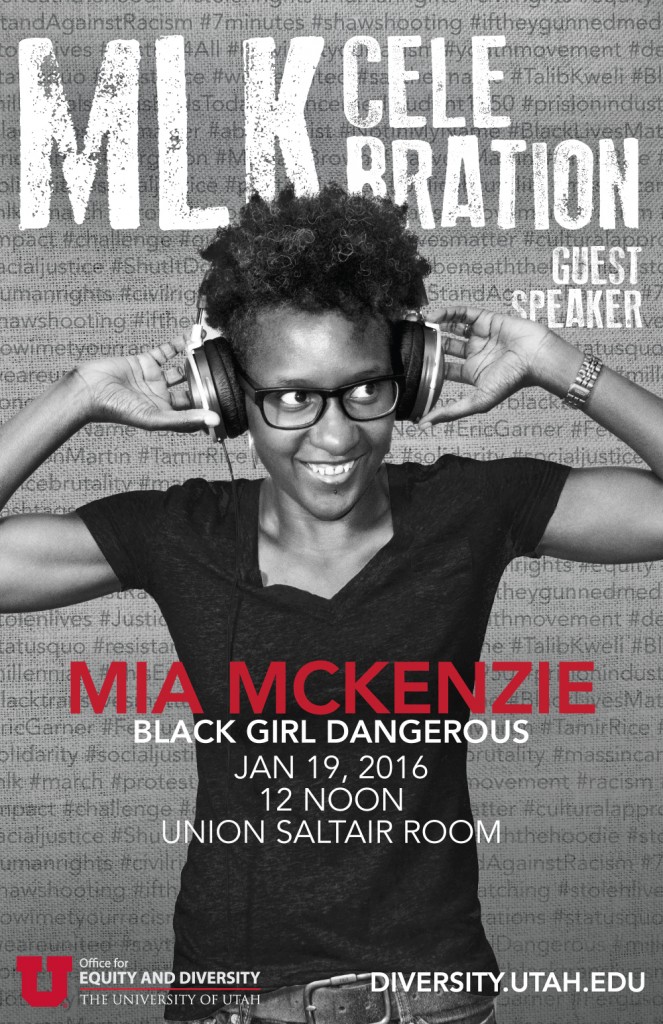 Her first book, “The Summer We Got Free” (2012), won the Lambda Literary Award for debut fiction in 2013. She is the creator of the website Black Girl Dangerous, a multifaceted forum for the literary and artistic expression of queer and trans people of color that is read by millions of people all over the globe. Though she started the project out of anger, McKenzie says that writing saved her, and the website became a place for her to speak loudly, and often satirically, about oppression. Since its inception, Black Girl Dangerous has become a platform for as many as 200 queer and trans writers of color to reclaim their voices, to speak truth to power and to tell their own stories of struggle and survival and triumph.

McKenzie’s second book, “Black Girl Dangerous” (2014), was created from some of the most provocative and incisive publications on her website. In all of her writing, McKenzie presents a nuanced analysis of intersecting systems of oppression that goes deep to reveal the complicated truths of a multiply marginalized experience.

Highlighted pieces from her book include:

In June 2013, celebrity chef Paula Deen was involved in a controversy for using racial epithets and making derogatory remarks toward African Americans. McKenzie was invited for an exclusive [and imaginary] interview with Deen at her home in Savannah, Georgia. There, McKenzie enjoyed bacon-wrapped donuts and racism with her coffee.

8 Ways Not To Be an Ally

The term “ally” and “allyship” have become very popular among many people who claim to stand against social injustice. McKenzie points out how these terms are used with ease, despite the fact that being an ally takes a lot of work and vigilance. She feels many of us are simply doing allyship wrong, and her list provides a way to identify mistakes and to inspire corrective actions.

In December 2013, when singer Beyoncé released her self-titled album, social media became divided on whether the artist is or is not a feminist. Issues of race complicated the question. McKenzie writes about how Beyoncé’s detractors employ a framework of misogyny that white feminism has historically applied to women of color, while her supporters might also need to make sure their critical lens remains focused.

McKenzie gives a non-comprehensive list of things many people do (or don’t) that further the effects of inequality. The key to combating these things,

McKenzie asserts, is doing the work of educating ourselves.

[bs_well size=”md”]Mia McKenzie will be answering your questions about her work during her visit. If you would like to submit your questions in advance, please email oed-events@utah.edu by Dec. 31, 2015.

Attendees may also ask questions at the event, time permitting.[/bs_well]