BIKE TO THE U

Celebrate the opening of the University to Downtown Bikeway on June 13 at 9 a.m.
Janelle Hanson

How do you get up the hill on your bike? For those commuting to the University of Utah on a bicycle, navigating the hill is a major factor in route selection. Some may desire a low-key slope with switchbacks and quiet streets, while others prefer a short, steep climb to campus.

Join the opening celebration of the University to Downtown Bikeway on June 13, 9 a.m., and try out the bikeway for yourself.

The City of Salt Lake has taken the question out of the commute with the new University to Downtown Bikeway, a mix of painted bike lanes, downhill shared lanes (also called sharrows), and special markings for crossing intersections. The bikeway has three routes of increasing difficulty to enable U commuters to find their best path to and from campus.

Attendees are welcome to pick up a new bikeway map and enjoy light refreshments. A ribbon cutting and speeches will be followed by a community bike ride downtown. 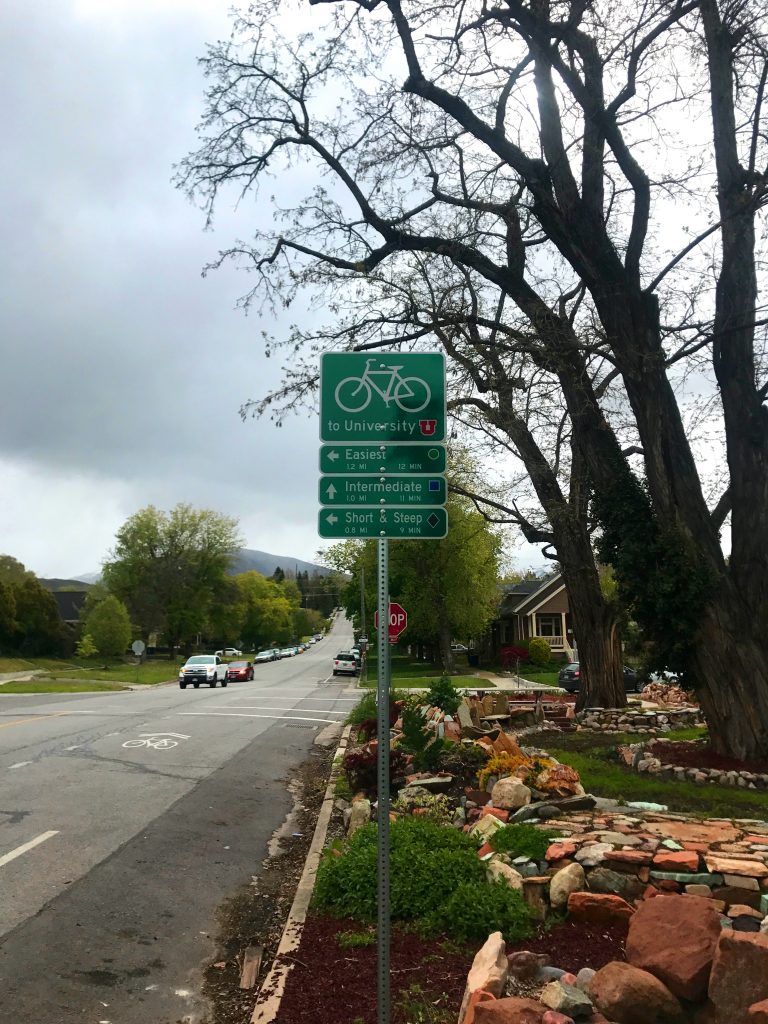 “We are delighted to celebrate the official opening of the University to Downtown Bikeway with the Mayor’s Office,” said Amy Wildermuth, the U’s chief sustainability officer. “We are committed to making the university a place that is easier to get to and around, and this is another important step in that direction.”

The university is one of Utah’s premier bike commuting destinations. During the development of Salt Lake City’s Pedestrian and Bicycle Master Plan, SLCMoves began partnering with the university to develop an enhanced bikeway from the U to downtown, with clear infrastructure to ensure the safety of bike commuters.

After gathering technical analysis and community input, including feedback from a university steering committee with staff from the Sustainability Office, Commuter Services and Facilities Management, the city extended existing bike lanes on 300 South from 600 East up to 1300 East, creating three different routes along 200 South, 300 South and 400 South.

Inspired by the naming system of ski routes, the bikeway has three marked routes; black diamond is the hardest, blue square is intermediate; and green circle is the easiest route. Those bicyclists looking for a challenge may wish to race up 200 South on the black diamond or take the blue square intermediate route on 300 South to 400 South. Bicyclists who want the easiest way up or down the hill may follow the green circle route for the gentlest path, which includes two switchbacks.

Whichever route you choose, follow the signs from downtown to campus and back.

This bikeway is part of Salt Lake City and the University of Utah’s commitment to making bicycling safer and more enjoyable. It is critical to their shared goals of community sustainability, clean air, economic development and wellness.