The U ranks as the top research university in the nation for commercializing technology innovations, according to the Milken Institute’s 2017 ranking of Best Universities for Technology Transfer.
Janelle Hanson 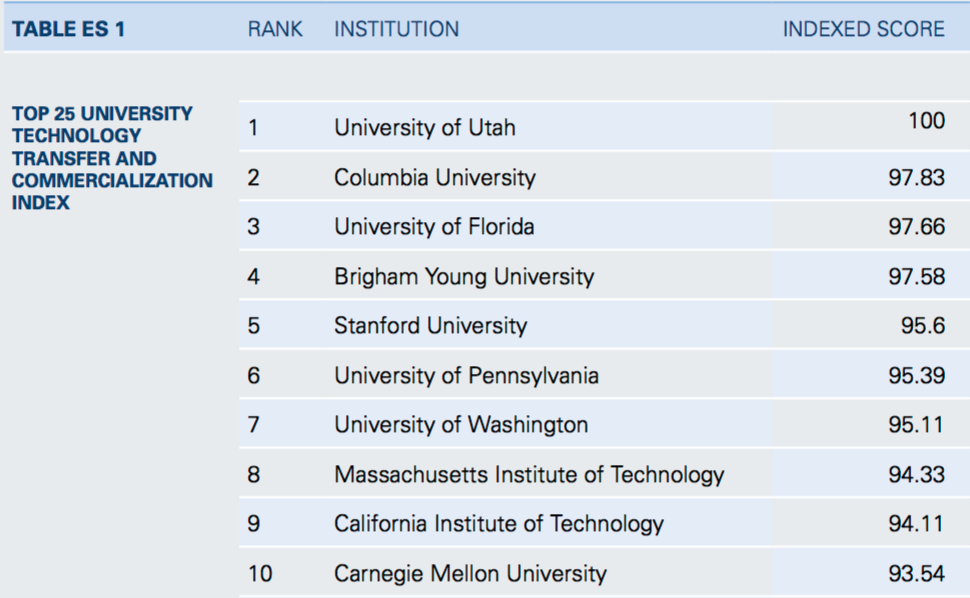 The University of Utah is the top research institution in the nation when it comes to commercializing technology innovations, according to the Milken Institute’s 2017 ranking of Best Universities for Technology Transfer.

The U has “quietly evolved into one of the most prestigious research universities in the United States with a strong emphasis on commercializing its research,” the institute said in the report released April 20. The U moved to the No. 1 spot after being ranked 14th in the institute’s inaugural report released in 2006.

The U was ranked above other top-tier research institutions, including Columbia University, the University of Florida, Brigham Young University and Stanford University.

“This recognition is due to the tremendous culture of innovation and entrepreneurship created by our faculty and the caliber of translational research here at the U,” said Keith Marmer, executive director and associate vice president of Technology & Venture Commercialization at the University of Utah. “The work our faculty is doing leads to knowledge and innovations that result in high-skill jobs and companies whose benefits are felt in Utah and beyond.”

The ranking is based on the University Technology Transfer and Commercialization Index, which uses four key indicators of technology transfer success, measured on a four-year average (2012-2015): patents issued, licenses granted, licensing income and start-ups formed. These were normalized based on a four-year average of research dollars received by each university, for a total of eight measures.

The index uses data collected by the Association of University Technology Managers in its Annual Licensing Activity Survey.

The U attracted $417.2 million in research spending in 2015, the institute noted, and consistently ranked high across all the indicators. It was propelled to the No. 1 position due to licensing income and start-ups, which received the highest weights in the overall index.

Between 2012 and 2015, the U generated $211.8 million in licensing income and recorded 69 start-ups, which the report noted was a “remarkable accomplishment” given its location in a smaller metropolitan area.

“Utah has a strong entrepreneurial culture and an incentive system that makes it attractive for research faculty and students alike,” the report said, praising the U’s Technology & Venture Commercialization as “among the best in the nation.”