AN INCLUSIVE CAMPUS: IT TAKES US ALL

As in the past, a multi-racial coalition is needed to change campus culture, professor says.
Janelle Hanson

U Professor William A. Smith predicted this past December that college campuses would need to take a leading and decisive stance against racial discrimination after the 2016 presidential election — and events in August proved his point, he says.

In August, white nationalists and counterprotesters clashed in Charlottesville, Virginia, home to the University of Virginia, during a “Unite the Right” rally staged to protest removal of a Confederate statue. The event turned deadly when a 20-year-old man described as a Nazi sympathizer drove his vehicle into a crowd of counterprotesters, killing 32-year-old Heather Heyer and injuring 19 others.

Days before the Virginia rally, two unauthorized flyers that were anti-black and specifically targeted black males — with disparaging images and text that included the phrase “Stop the blacks” — were briefly posted on University of Utah property. A white nationalist group later claimed association with the flyers.

Smith has long researched and written about how microaggressions, hate incidents and discrimination affect people of color. In 2003, he coined the term “racial battle fatigue” to describe the psychophysiological symptoms that people of color may experience living in and navigating historically white spaces. Last September, he published a new study looking at the experiences of black male students on historically white university and college campuses.

In that paper, Smith argued that “systemic and predictable racial microaggressions” are pervasive on college campuses in the United States.

While the U is taking many steps to ensure it is a diverse, inclusive campus, more action is needed, Smith said, from increasing the number of senior-level administrators of color to encouraging more students of color to attend the university.

“The more diversity we have on our college campus, the stronger we are because we can begin thinking outside of the box and beyond our own viewpoints,” Smith said. “In Utah, we always have a lot of work to do because Utah is one of the least diverse states in the country.” 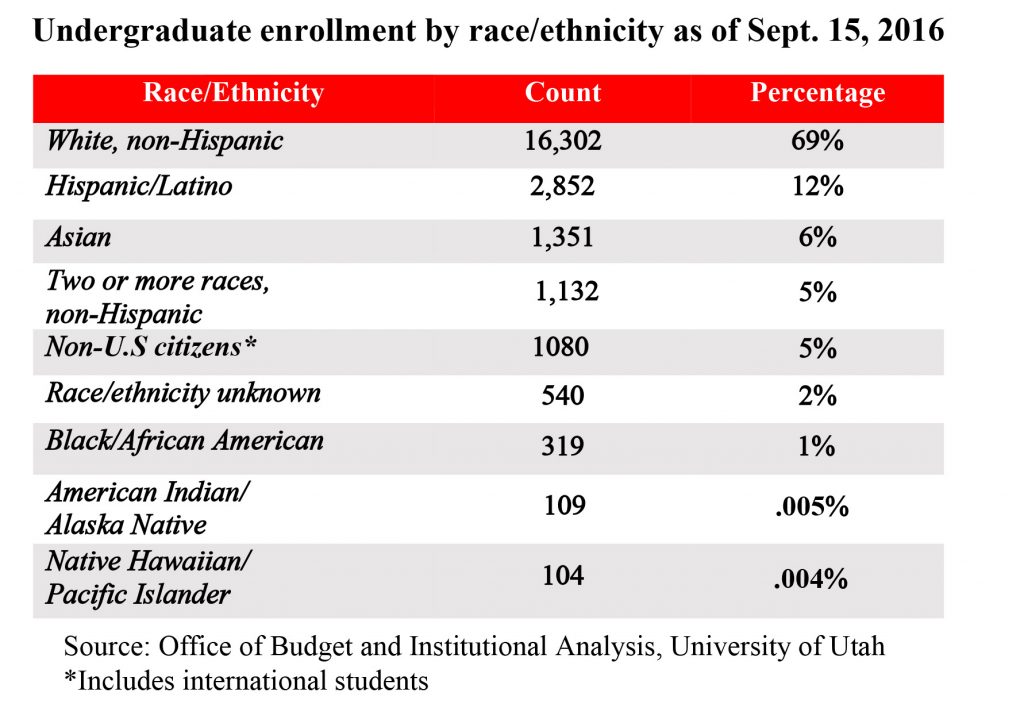 People of color comprise approximately 21 percent of Utah’s population of nearly 3 million, according to U.S. Census Bureau data. At the U, people of color make up about 25 percent of the undergraduate student body, though individual group numbers are quite small (see chart).

“People see why we should have stayed organized to fight for social justice and equality,” Smith said. “The alt-right is highly organized and constantly meeting, they are very militarized. They prepare for these moments. Too often, the more liberal folks aren’t as organized.”

Smith holds out Fannie Lou Hamer, a leader in the civil rights movement, as an example of what’s needed today. Hamer, known for how she pulled people together in amazing ways to advocate for social justice, believed a multi-racial coalition was needed to fight for civil rights.

“We must all take up the fight and find specialized areas we can focus on to make sure we have equality amongst groups and people who aren’t equally stationed in society,” Smith said. “I just believe we have to help this campus recruit students who have a social justice orientation. That is the only way we’ll change the culture of this campus.”