In May, in front of national television cameras, 44-year old University of Utah chemistry professor Janis Louie, with two degrees and three children behind her, stared down the toughest obstacle course she’d faced yet: “American Ninja Warrior.”

Louie’s journey to the Ninja Warrior stage is a unique combination of athletic discipline, academic dedication and maternal devotion. All of her experiences combined, however, built the 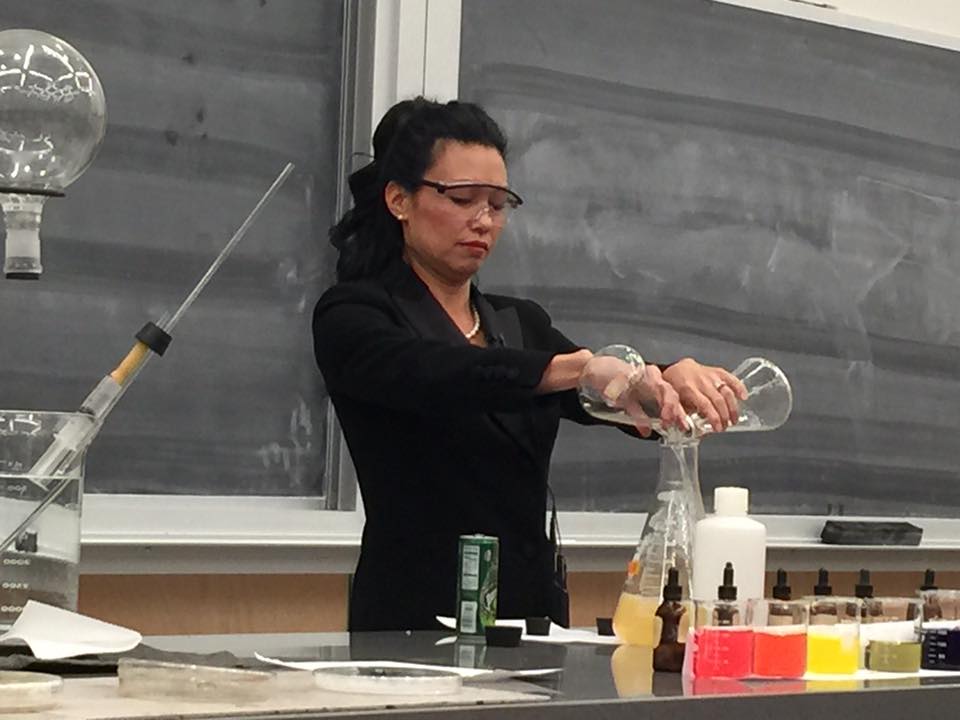 physical and mental fortitude to take on such a daunting challenge and love the process. “How many times as adults do we get the opportunity to put ourselves in a really uncomfortable situation where you can grow from it?” she says.

Louie says she’s loved chemistry since high school. Before long, she was seeing chemistry everywhere. “Everything we touch and feel and smell, everything is chemistry,” she says. “That’s what really ignited my desire to pursue chemistry as a career.” She majored in chemistry at UCLA, and while her fellow chemistry majors were groaning and complaining about organic chemistry, Louie instead came to see “O-Chem” as an art, with many chemical pathways to arrive at the same result. As a graduate student at Yale University, Louie synthesized new chemical compounds. “Before me, this never existed, ever,” she says. “There’s something really spectacular with that feeling.”

Now her chemistry lab at the U focuses on developing better catalysts, compounds that facilitate chemical reactions. Many catalysts involve precious metals, such as palladium or platinum. Louie’s group hopes to achieve the same results with cheaper, more abundant metals like nickel or iron.

Parallel to her scientific career is a passion for athletics. “I started when I was a little girl. I was a gymnast,” she says. “That is the sport at heart for me.” Opportunities to pursue gymnastics diminish with age, however, so she shifted her focus to cheerleading while at UCLA and aerobics instruction while at Yale. After starting her research program, she started bodybuilding as well.

“The first time I was on stage I remember really enjoying the performance aspect,” she says. “When you teach, there’s an element of performance. You’re not just droning off. You want to perform for them. It’s a kind of performance I really enjoyed.” She also entered fitness competitions before taking a break from competition five years ago.

“I had triplets, which does a number on your body,” she says.

Triplets. They’re now five years old, but as babies they required a different set of parenting skills than babies that come one at a time. “What do you do when they are crying?” she says. “You pick them up. I can’t pick up all three at the same time, and there are times when all three are crying!” Even when crises aren’t all happening at once, Louie says that consistent scheduling was key to ensuring that she got some time to herself as well. “There’s no ambiguity. This is when we eat, this is when we play, this is when we sleep,” she says.

After the triplets, she still planned to stay in shape, but competing athletically wasn’t her top priority. 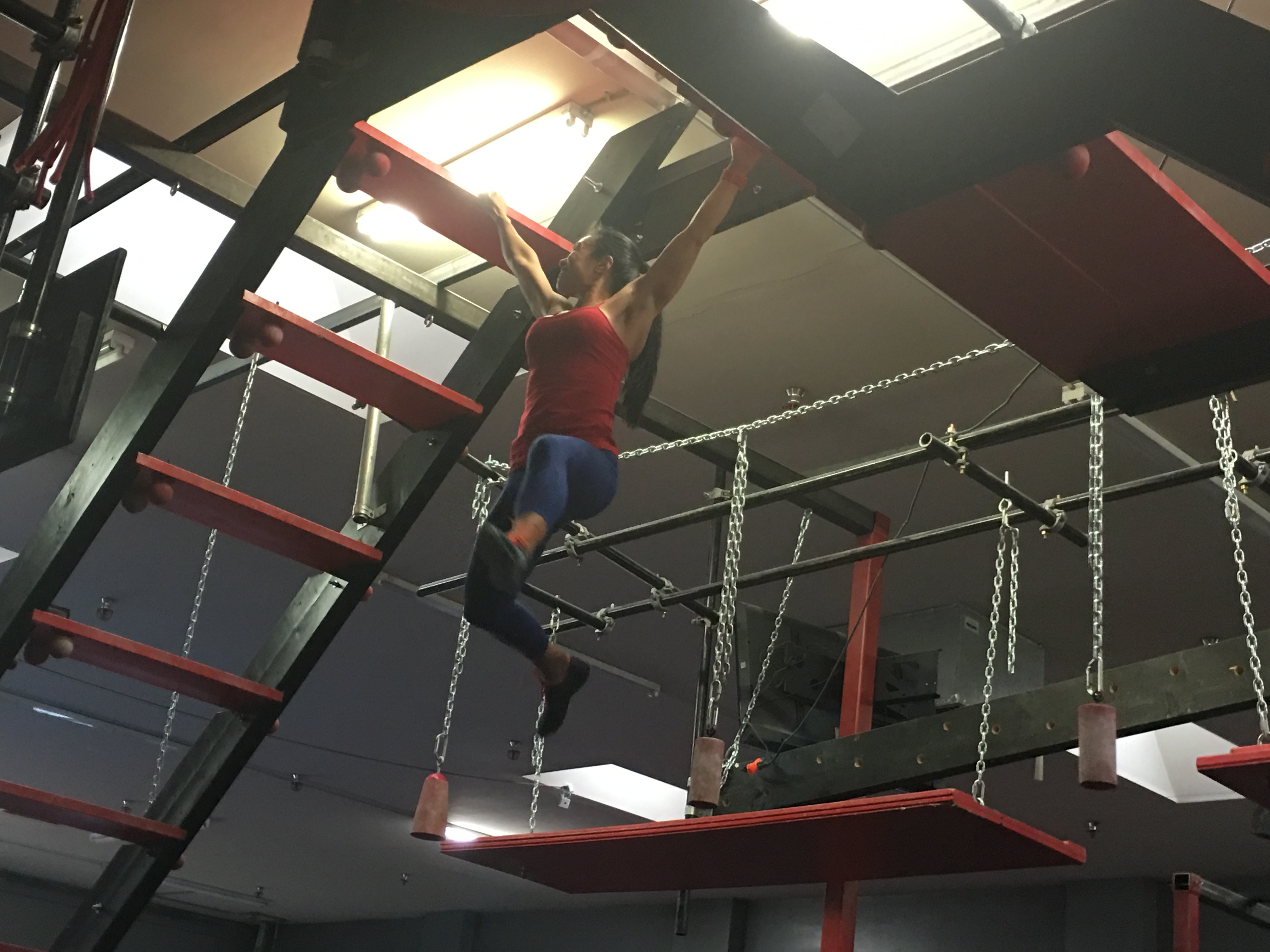 “And then ‘Ninja Warrior’ came along and it just looked like so much fun,” she says.

The audition process started with an online application form and a two to three minute video. Louie says the producers want to see your unique story and what makes you different. Louie’s profile as a chemistry professor and mother of triplets may have caught the producers’ eyes, because even though she didn’t complete the application due to an injury, the producers called her in January to see if she was still interested. After that call, Louie decided she needed to start training.

Much of her training involved typical strength and conditioning exercises, including pullups. The door frame of her office in the Henry Eyring Building was a convenient place to fit in a few extra pullups.

She also trained at Ninja Warehouse in Ogden, a gym owned by two-time “American Ninja Warrior” finalist Karson Voiles. The gym includes obstacles based on those seen in the show, and provided a perfect venue to prepare for the obstacles she’d face.

On May 13, Louie traveled to Oklahoma City for her run in front of the cameras. She had no idea ahead of time what challenges she’d face. “When you train in a gym, you gain some familiarity with particular obstacles,” she says. “When you compete, you’re seeing these obstacles for the first time and you’re not allowed to practice, you’re not allowed to touch them, until you walk up and it’s your run.” She and her fellow competitors could watch course testers and other competitors, however, giving her ideas of how to approach each obstacle.

Her training as a chemist helped her mentally prepare. In research, she says, only around 10 percent of reactions are successful; 90 percent aren’t. “Those are really bad odds,” she says. “We are gluttons for punishment.” But the experience of persisting through repeated setbacks built up her ability to shake off discouragement.

Louie wasn’t the only Utahn competing in Oklahoma City. Two, Brian Beckstrand and Jon Stewart, completed the course to advance to the next stage of competition. Louie got to know other competitors, including Allison Toepperwein, who later wrote on her blog that Louie is “a gorgeous mom of triplets, with a megawatt smile.”

Louie’s moment finally arrived. “You are uncomfortable,” she says. “There’s no real way to prepare for it such that you have no nerves. Any obstacle can take out anyone.” She cleared the first obstacle, the Floating Steps, but then had trouble hooking the rings on the second obstacle, where her run ended with a splash into the pool beneath the course. She didn’t appear as a competitor in the final cut of the episode, which aired June 20, but can be seen in the athlete waiting area.

“I had a great time,” she says. “It was a wonderful experience!” Her advice to other “Ninja Warrior” hopefuls? “Do it!” There are thousands of applications, and only a few hundred selected to compete. The odds are not in your favor, she says, but hundreds of thousands of others think it would be fun – but never get as far as the application. “The journey itself is worth it, even if you don’t get a call,” she says.

Her own takeaway from the experience, which she says she’d happily do again: “You’re never too old to try.”

Paul Gabrielsen is a senior science writer at University Marketing and Communications. If you have an interesting story idea, email him at paul.gabrielsen@utah.edu.