Register for other affinity graduations here.

Graduations are a time to acknowledge and celebrate students and their academic achievements. These celebrations are a culmination of years of attending classes, reading, study groups, writing, solving equations and personal growth. But what of being recognized for more than academic achievements? In 1995, Dr. Ronnie Sanlo, then-director for the LGBT Resource Center at the University of Michigan, decided that for LGBTQIA+ students, surviving their college years in spite of the isolation and barriers they often faced was also worthy of celebration.

As a self-identified Jewish lesbian, Sanlo reached to her historical background for inspiration. She imagined blending the pink and black triangles that gay and lesbian folx were forced to wear during the Holocaust would create a beautiful shade of lavender. And so—reclaiming physical markers for persecution and turning them into a symbol of collective perseverance and survival—the first-ever Lavender Graduation was held at the University of Michigan in the spring of 1995. With the participation of three graduates, this first celebration was small in number, but its impact has steadily spread throughout the country.

The primary reason I wanted Lavender Graduation in Utah was because I wanted being LGBT to be celebrated in the academic realm. 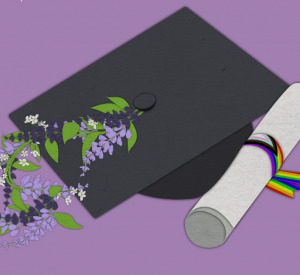 The first Lavender Graduation at the University of Utah took place in 2004, under the guidance of then-coordinator for the LGBT Resource Center, Ruth Hackford-Peer. The event hosted seven graduates and featured a keynote by Laura Milliken Gray, a local attorney and U alumna. Similarly to the first Lavender Graduation in Michigan, the U’s LGBT Resource Center was not only acknowledging the academic achievements of the graduates—but more importantly—it was a symbol of resilience during polarizing debates on same-sex marriage in several states. “It was a divisive time in Utah generally, and that played out on campus,” Hackford-Peer says. “The primary reason I wanted Lavender Graduation in Utah was because I wanted being LGBT to be celebrated in the academic realm, in ways we see much more of now, but was less visible (and less celebrated) 15 years ago.”

Lavender Graduation at the U has grown steadily since the first iteration in 2004, hosting between 30 and 35 graduates in more recent years. While some students may not be out in their academic departments or to their families, Lavender Graduation has an important role in creating a space and time “where students celebrate this milestone in the fullness of their LGBTQIA+ identities, being cheered on by community,” says Dr. Clare Lemke, current director for the LGBT Resource Center.

These students are leading across the University, they are excelling in their academics, and they are contributing to our campus community and making it a better place.

Furthermore, the celebration has become a time to thank the graduates for their contributions to the campus community. Lemke says, “We know that LGBTQIA+ students are in every academic discipline in the university and are involved across student organizations and leadership programs at the U. These students are leading across the university, they are excelling in their academics and they are contributing to our campus community and making it a better place.”

On May 1, 2019, the University of Utah will be reaching a milestone by celebrating the 15th annual Lavender Graduation on campus, and the LGBT Resource Center sees this as a tradition that will continue and grow. “We believe it is important that students have a ceremony that recognizes their accomplishments in the context of LGBTQIA+ community,” says Lemke. “It is a time to celebrate all that LGBTQIA+ graduates have accomplished and for the campus community to let them know how proud we are of them. That is a special tradition that we will continue to honor at the U.” 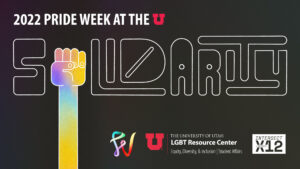 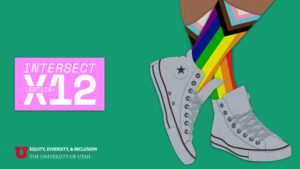 Thriving in the fullness of our complex selves
October 6, 2021 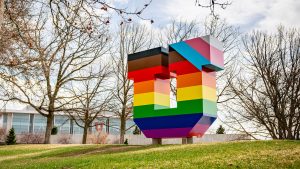