Congratulations to the new graduates. It is an honor today to speak to you even though it is under such unfortunate circumstances.

I’m a native Utahn. I grew up in Utah and received my formal education from the University of Utah, and I’m proud to have had a connection with the university for many years.

I would like to take a moment to relate a story about my early education. When I entered high school, my future did not look promising. After taking an aptitude test in the 10th grade, a counselor, following up on the results of the test, asked what I intended to do in the future. After telling him I would like to go to college and maybe study engineering, he informed me that I had no aptitude for anything technical and that I should look to do something else. I think he suggested that I should become a cheese wrapper, since the aptitude test indicated I worked well with my hands.

In high school, George Barton, a math teacher, changed my life. He was motivating, he taught his students how to learn and how to be focused, and how to work and solve problems.

His approach was really quite simple. He instructed us to pick up a college-level textbook for algebra, solve every problem in the book, then move on to the next subject, trigonometry, and do the same. And after that, go on to analytic geometry. By following his advice and solving a lot of problems, my grades in math and all other classes improved, and I went from C’s to A’s and B’s.

An interesting note is that 40% of my classmates in Mr. Barton’s classes went on to earn advanced degrees. One of my classmates, Joe Taylor, earned his Ph.D. in four years after exiting high school and beginning college, and he eventually became the head of the mathematics department at the University of Utah.

The whole experience taught me teachers have an enormous effect on their students. I hope in your educational experiences you have encountered great teachers and mentors. It is interesting to note the changes I have observed and experienced over the last 50 years, in information technology, have been totally unpredictable and quite frankly, mind-blowing. Things that were thought to be impossible have materialized over the years. The changes over the coming years will probably be much greater and even more consequential for all of our lives.

To manage this evolution, the world needs an educated and informed populace. Today, you are being honored and have earned the right of becoming part of that group.

Because of the rapid progress in information and technology, your need for education, constant learning and understanding of the world will be never slowed down or paused. Continuing education will be with you for the rest of your life. Let me give you three examples of how the world of technology has evolved.

The phone in your hand is just a remarkable, small computer, that is roughly 400 times more powerful than the computers that were used to put a man on the moon in 1969.

The second change started in Utah in 1969, with a project that has transformed the world. At that time, the University of Utah had a very large, desirable computer research contract with the government’s Advanced Research Projects Agency. It was called ARPA and was started by the Eisenhower administration in response to the Russians launching the Sputnik satellite.

The research at Utah was led by Dr. David C. Evans. Dave was my Ph.D. thesis advisor. His research project focused on man-machine interaction—in other words, computer graphics and interactive computing. About 15 other renowned universities and research labs—including MIT, Harvard, UCLA, University of California, Berkeley, Stanford, University of Illinois, Carnegie Mellon, Rand and Stanford Research Institute and others—also had ARPA contracts. Together, these contracts covered nearly all aspects of computer science research.

The amazing thing was that all this research at that time was unclassified and the results were published. The results of that came out of ARPA contracts, rapidly changing the world of information technology. It is a very interesting story of how all the students that worked under the ARPA contracts have influenced the world of computing today.

In March of 1969, all the ARPA principle scientists and the ARPA administrators, a total of about 50 people, met in Utah at the Rustler Lodge at Alta, for their annual meeting. Two students, Alan Kay and myself, were invited.

Alan is best known for his ideas on laptop computing and object-oriented programming. At that meeting, all research administrators agreed they needed much better communication between the various groups, to share their research and results. They agreed to share the costs of setting up electronic communication lines between all the research centers.

The third example of information technology change is about electronic memory. In 1969, internal memory, internal computer memory, was very small in capacity and very expensive. Typical memories were 65,000 bytes. The largest commercial random access device was a rotating drum called the FASTRAND, made by Sperry Rand Corporation. It had about 128 megabytes of storage. It weighed 5,000 pounds and cost $250,000 in 1969.

This isn’t a valid comparison, but the world’s data capacity today, the storage in all the data centers of the world, is approximately 550 exabytes. Since most people are not familiar with what an exabyte is, it is 550 billion gigabytes. Represented another way, it is 550 followed by 18 zeros. It’s almost equivalent to the number of grains of sand on the earth.

All of you should think of today’s online world as a gigantic, rapidly expanding deep lake of information and data. The explosive growth of accessible data over the last 15 years has unleashed the field of artificial intelligence. Things that we thought were impossible 15 years ago, are now commonplace.

These tools are getting better and better for searching and navigating the vast lake of knowledge and data.

One of my favorite quotes while at the university, came from a philosophy professor in the 1960s. His name was Waldemar Reed. He said, “Speed reading philosophy is like roller skating through the Louvre.” At that time, with no information technology, that quote was funny and appropriate.

Most of you probably use social media as an important way to communicate and get information from the internet today. I would change the quote to say, “Using social media to learn is like skipping a stone across the surface of the lake of knowledge. It’s great fun, but never gets you below the surface.” The moral is, dive deep to expand your knowledge base.

Today is a very special moment in your life, but now that you have experienced a good education, it is your job to keep up and keep going. I would like you to remember one thing. The rest of your life is not a spectator sport. Your job in life is to be an active player, to make the world a better place.

Again, congratulations, and I look forward to hearing and reading about all you will have done and accomplished. Thank you. 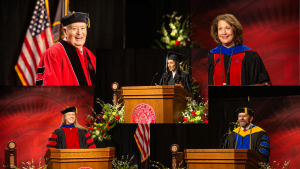 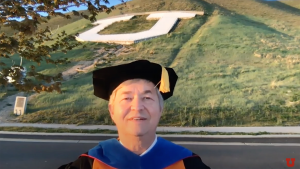 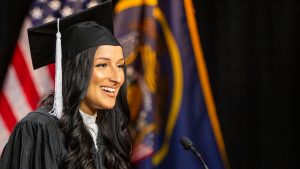