James Ehleringer, distinguished professor of biology at the University of Utah, was honored with the Rosenblatt Prize for Excellence, the U’s most prestigious faculty award.

The $40,000 gift is presented annually to a faculty member who displays excellence in teaching, research and administrative efforts. 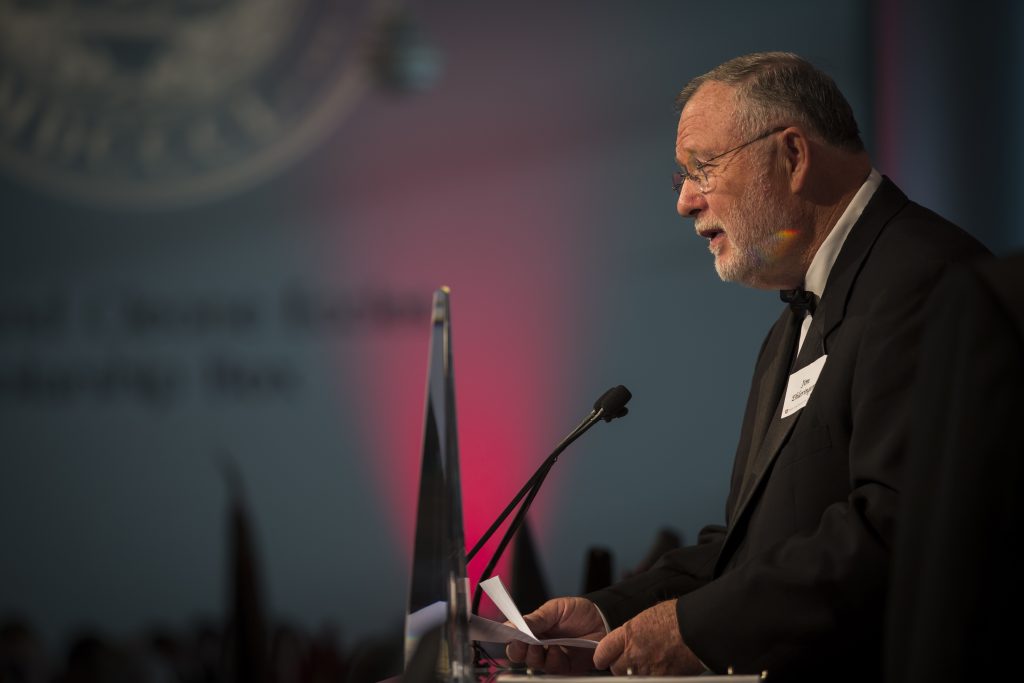 “Jim has dedicated his career to advancing science and mentoring students,” Pershing said. “He has impacted countless lives by pushing the field further and through supporting undergraduate and graduate students, postdocs and professional scientists; I have had the privilege of working with professor Ehleringer in many different capacities over several decades. His infectious enthusiasm for his discipline and pursuit of discovery make him a highly effective scientist and leader.”

Ehleringer holds a doctorate in biology from Stanford University and began his career at the University of Utah in 1977 as an assistant professor in the Department of Biology. He became a distinguished professor of biology in 2000; served as biology department chair from 1993-1996, and is responsible in large part for the fundraising and eventual construction of the Aline Skaggs Biology Building completed in 1998; was the founding director for the Global Change and Sustainability Center at the U, serving in that position from its establishment in 2009 until 2015; created the Stable Isotope Ratio Facility for Environmental Research and has been the director since 1984; and is a member of the U’s Office of Sustainability leadership team.

He is one of the most influential scientists in the world in plant ecology and stable isotope ecology and was instrumental in developing the use of stable isotopes for ecological, geographical, geological and anthropological studies. His ecological insight and studies have played critical roles in historical reconstructions, forensic investigations and the development of a new field called isotope forensics. This work has influenced how isotopic data can be used to track an athlete’s use of performance-enhancing metabolites, the source of carbon dioxide in the atmosphere or where illegal drugs originate. He has worked in partnership with legal experts to enhance how isotopic information is used in courts.

During nearly 40 years at the University of Utah, he has produced more than 470 publications, 104 of which have each been cited more than 100 times. He developed several biology courses, including IsoCamp, an intensive two-week summer course on stable isotope biogeochemistry that has a national and international reputation and has trained more than 800 scientists from around the world since it began in 1996.

His graduate students and postdoctoral associates continuously push the field forward with theoretical insights and tests. A colleague noted that these developments have kept pace for more than 20 years in new and unpredictable directions.

Ehleringer’s early work in desert plant ecology is foundational in the field and is widely cited in textbooks and scientific literature. He was editor-in-chief of the journal Oecologia for 17 years, and under his editorship, the journal became the single most valuable international journal in ecology.

Additionally, Ehleringer played an instrumental role in the U’s acquisition of a large tract of land in southern Utah for a field station now known as the Rio Mesa Center, and later he served as the inaugural director. He was the first to initiate a cross-campus conversation about how to embrace and incorporate Red Butte Creek into the university’s academic agenda, and he spearheaded a National Science Foundation grant to provide scholarships to first-generation students to study in STEM fields.

Through it all, he has impacted the lives of numerous students, mentoring them through their time at the U and beyond.

“In my mind, the greatest impact a university professor could have is the direct positive impact on another person,” said one nominator who is now a tenured faculty member at an Ivy League university. “Jim literally changed my life and set me on a track to accomplish everything I have in my career.”

Ehleringer has been recognized with the state of Utah Governor’s Medal for Science and Technology, received the Student’s Choice Award for Teaching, the U’s Distinguished Research Award, the Alexander von Humboldt Fellowship, was named an American Geophysical Union Fellow, an American Association for the Advancement of Science Fellow and this week was elected as one the newest members of the National Academy of Sciences.

About the Rosenblatt Prize

The Rosenblatt Prize, a $40,000 cash award, is presented annually to “recognize, encourage and honor excellence in teaching, in research and administrative efforts, collectively or individually.” The Rosenblatt endowment, from which the prize money is drawn, was established in 1983 by the Joseph and Evelyn Rosenblatt family to honor the civic leadership and generosity of Joseph’s parents, Nathan and Tillie Rosenblatt, who immigrated to Utah from Russia in the late 19th century.