The annual Howard Clark Scholarship Exhibition in the Alvin Gittins Gallery is open now through Aug. 30, with a special reception on Thursday, Aug. 29, from 6-8 p.m.
Emeri Fetzer - communications specialist and grant writer, College of Fine Arts 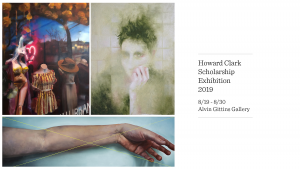 The annual Howard Clark Scholarship Exhibition in the Alvin Gittins Gallery is open now through Aug. 30, with a special reception on Thursday, Aug. 29, from 6-8 p.m. The exhibition offers a unique opportunity to delve into the work of three recent alumni of the University of Utah Department of Art & Art History: Alyssa Hood, Lucy Le Bohec and Alexis Rausch. Supported by the Howard S. Clark Painting Scholarship, featured students were able to make meaningful discoveries while developing new bodies of artwork.

“I have been interested in desire as a theme for my body of work,” Hood said. “I’ve used the subject of shop windows, to create a separation of boundaries between the observer, and the desirable.”

While in the College of Fine Arts at the U, Hood’s daily practice continued to evolve but she particularly valued “being introduced to the complex beauty and structure of the human form.”Le Bohec called this particular selection of her work, “my favorite discovery while in school.” To achieve the effect she was looking for, Le Bohec applied paint in thin transparent layers.

“The primary visual themes the series are very low contrast and low saturation,” she revealed. “It has been important that the characters in each painting are difficult to distinguish from their surroundings, or they appear to be a part of their surroundings.”The selected paintings by Rausch emerged from her experiences while hospitalized for nine months following a heart attack in 2016.

“When you live in the hospital or another medical facility long-term, the privacy and identity of each patient is taken very, very seriously, so all of the sketches were made using stray golf pencils of only people’s unidentifiable body parts” Rausch explained. “However, I came to find that these depictions are far more intimate and identifiable than the typical facial portrait since the body acts as a strange landscape for all of the things that happen to you.”

The heart attack came in the middle of Rausch’s senior year, forcing her to take time off and return to finish her degree when she had recovered.

“I received an overwhelming amount of support from multiple faculty members,” she described. “They helped me learn that rejecting the hustle does not mean you are compromising your career or that you are weak.” The Howard S. Clark Painting Scholarship, first funded in 1995, is specifically applicable to eligible graduating students with an emphasis in painting and drawing and is awarded by area faculty. The scholarship supports the materials used in the making of the work as well as the exhibition.

Beyond his generous support of the Department Art & Art History at the U, Howard Clark served as former chair of the Fine Arts Advisory Board. His abstract paintings can be found in permanent collections on campus at the David Eccles School of Business, University Hospital and Gardner Music Hall.