If you are motivated to graduate sooner, why not try a transformative learning experience with a pre-summer (May 11-15) intensive general education course in Murray?

This intensive class will be as rigorous as a fall semester class and requires attendance at each class session. In addition to time spent in the classroom, students will be required to complete pre- and post-work. This work may include reading from the textbook or other sources, as well as completing online lectures, assignments and exams.

For more information and to register, go to continue.utah.edu/murray.

Every year, the governor appoints a student from an institution in the Utah System of Higher Education to represent Utah students on the State Board of Regents. The Student Regent participates in Regents’ meetings and is a voting member of the board. The governor asks the student regent to serve for one year. Students are encouraged to apply.

Applicants must be an enrolled student at a USHE institution from July 1, 2015–June 30, 2016. Student body presidents at each USHE institution shall nominate three qualified, matriculated students. Nominated candidates will be submitted to the governor, who will make the appointment. Current serving student body presidents are not eligible for this position. All applicants will be notified before June 15.

The deadline to apply is April 17.

What has been your favorite Eccles experience? Was it visiting the campuses of Google or Apple on a class trip? Maybe it was managing an investment portfolio for the first time. Or maybe it was making some great friends in a marketing class.

Whatever it is, David Eccles School of Business want to know about it.

Some of your fellow classmates have shared their experiences, and they’ve been highlighted on windows along the SFEBB first and fifth floors and near the elevators in the basement.

Share your Eccles experience on social media, using #EcclesExperience or fill out this entry form, to participate in the spring 2015 Eccles Experience Challenge.

Each social media mention or completion of the entry form enters you to win one of several great prizes, including a mini iPad or $50 and $25 gift certificates to the Campus Store.

To be eligible to win, you must:

1) Be a student at the David Eccles School of Business

Winners will be announced on April 6.

If you are interested in participating as an Emergency Assembly Point volunteer for ShakeOut 2015 on April 16, please contact Jen Stones for details at 801-585-3751 or email Jen.Stones@ehs.utah.edu.

The U would love to have you help “Drop, Cover, Hold On and Evacuate.” 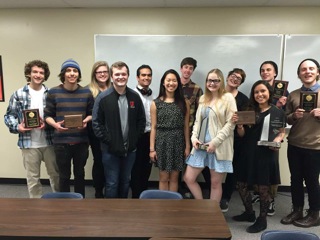 On March 14-18, the debate society competed at the National Parliamentary Debate Association’s National Championships held at Kansas Community College. At that tournament, the U’s debaters finished sixth among the 50 universities and colleges in attendance (and second in the Pac-12 behind Oregon). This represents an improvement from ninth place in 2014. The NPDA National Championships also award recognition based on a season-long ranking system that compares the performance of all schools who compete during the competitive season. In the season-long ranking system, the U also placed sixth (and first in the Pac-12). This marks and improvement of 19 spots from the team’s 2014 ranking of 25th. In addition, senior Duncan Stewart placed seventh out of more than 300 competitors in awards given to individual participants.

The following weekend, a portion of the team attended the National Parliamentary Tournament of Excellence held at William Jewell College in Liberty, Missouri. The NPTE is the most elite national tournament in which the U’s debate teams participate and features the top 60-70 teams in the country each year. In addition to qualifying three teams to the tournament (a record for the University of Utah), juniors Shaylee Tulane and Weston Wood placed 31st overall. The team of Stewart and Drew Marshall (sophomore) also placed sixth in the tournament and were also the second most successful Pac-12 team at the tournament. Again, Stewart walked away with individual honors, placing 13th among 128 competitors at the tournament.

The team’s last national tournament, the American Forensics Association’s National Individual Events Tournament, will be held in Portland, Oregon, at Lewis & Clark College, April 3-6. Nine Utah students will compete in 17 events, including public speaking and oral interpretation of literature. Following the conclusion of the season, the team will look toward its summer debate camp, the Beehive Forensics Institute, which hosts more than 80 high school students from states around the country. If you are interested in joining one of the U’s oldest and most successful student organizations, you can learn more by visiting debate.utah.edu.