Other hurricane research at the U

Chances are you may have seen a “spaghetti plot” on a weather report during the run-up to Hurricane Irma. It’s a visualization of the many predicted possible paths of the hurricane. This kind of view can be confusing, though, especially for residents and governments who need to make potentially life or death decisions on evacuations.

A possible alternative is the “curve boxplot,” developed in part by researchers at the U’s Scientific Computing Institute. The plot shows the middle value of all the possible tracks, the range encompassing the middle 50% of possible tracks and the outer bounds, including outliers, all in different colors. The final visualization, produced by the National Center for Atmospheric Research, provides a clearer picture of the areas at greatest risk. “As we rely more and more on large computational models and large-scale data analysis in so many aspects of our lives, such as medicine, finance, politics, etc., better tools for understanding certainty, accuracy, and risk will become crucial,” says Ross Whitaker, a professor in the school of computing and a principal investigator on this curve boxplot project.

Among the eyes glued to TV news reports and forecast cones as hurricanes Harvey and Irma tore into the Caribbean and the United States were those of University of Utah atmospheric scientist Zhaoxia Pu. She was watching, as she does every hurricane season, to see how well computer models that forecast the hurricanes’ path and impacts matched reality.

Hurricane prediction, as with all weather forecasting, still can’t produce perfect predictions. But Pu and others are taking what they learn from every hurricane and forming forecast models that can bring a lot more certainty.

To understand how Pu’s work contributes to weather forecasts, it’s important to understand how forecasts are generated in the first place. All forecasts, including those produced by students at the U, are mostly based on the forecast outputs from computer models that start with known current weather conditions. Using the principles of thermodynamics and physics, the models predict how atmospheric conditions might change with successive time steps.  The top computer models include one run by a consortium of European nations, namely the European Center for Medium Range Weather Forecasting, and the U.S. models produced by the National Centers for Environmental Prediction, National Weather Service. Forecasters take into account several model projections and their own knowledge of meteorological principles to make a prediction.

But a bit of chaos is inherent in weather. “People’s expectations are really high,” Pu says. “That’s understandable – that’s why we do the forecast. But everybody should also understand forecasts always have uncertainty.”

Bringing the data together 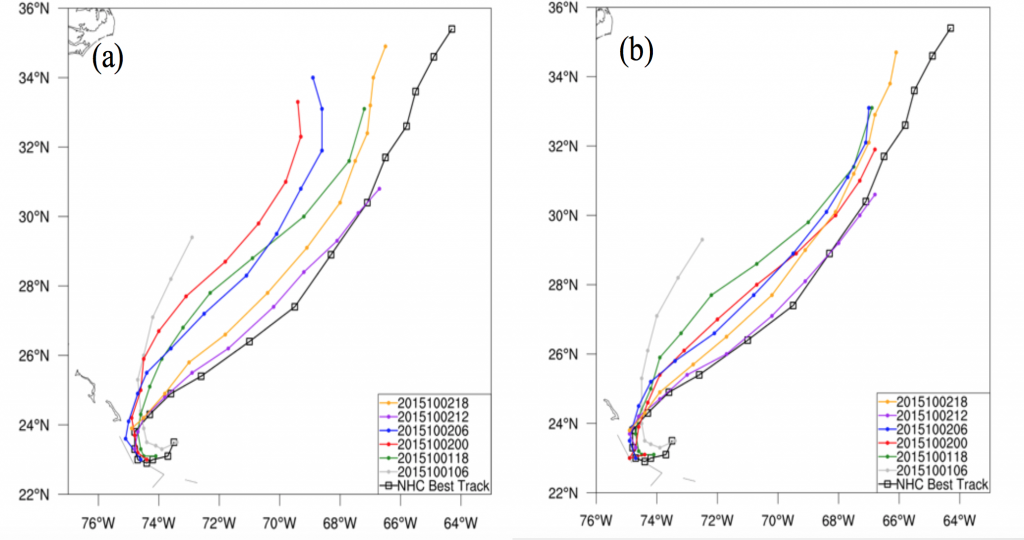 Pu’s work comes into play before supercomputer models start churning. Her research is in data assimilation, or converting weather observations into data that models can use as their initial conditions. It’s far from a straightforward task. Data can come in from radar, from satellites and from ground-based observations.  Each set of data, however, makes the picture of current weather conditions clearer, leading to better forecasts.

For example – Pu and her students recently demonstrated how integrating microwave data from the Global Precipitation Measurement satellite could have improved predictions for 2015’s hurricane Joaquin, which surprised forecasters by making a dramatic hairpin turn back into the Atlantic Ocean. The original range of forecasts showed a range of possible tracks. With the additional satellite data, though, predicted tracks are tighter and closer around the hurricane’s actual path.

Pu also works to answer questions about hurricane landfall, assimilating radar data into weather models. “It’s a big change moving from ocean to land,” she says. “Most hurricanes will decay. But some of the hurricane will get re-intensified.” Predicting precipitation amounts is a focus of her research, she says, as well as determining which quadrant of a hurricane carries the most force. A hurricane’s diameter can be hundreds of miles. “In order to give an accurate warning, we need to know which part will have the strongest impact on people,” Pu says.

Pu’s research group is a part of two initiatives to improve hurricane forecasting in the U.S. One is NOAA’s Hurricane Forecast Improvement Program, which aims to reduce path prediction errors by 50 percent in 7-day forecasts, and the other is the National Weather Service’s Next Generation Global Prediction System, a new weather model. In the latter, Pu is implementing the principles she’s learned about interactions between land and the atmosphere. “Hopefully that will improve landfall forecasts as well,” she says.

When a hurricane is approaching, Pu says the best source of information is the National Hurricane Center. Although hurricane forecasting models have room to improve, she says, she’s pleased with how well the models have performed this year. “Scientists are working hard, and in all these hurricane forecasts we’re always learning,” she says. “It is a basic and an applied science.”