If an elk walks through a forest and there’s no scientist there to count it, does it make a sound? Or more importantly—does it make an impact on forest managers’ decisions? To understand how development in Utah’s Wasatch canyons affects wildlife, decisionmakers first have to know what wildlife is there. That’s a task easier said than done. Doctoral student Austin Green and a small army of volunteer citizen scientists are up to the challenge. 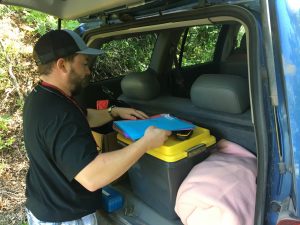 Green is a student in the school of biological sciences and the leader of a project to keep an eye—210 eyes, actually—on wildlife in canyons up and down the Wasatch Front. He hopes his data will reveal which mammals are living in the canyons, how many there are, and how development is affecting them. It’s a big project. And he’s found a lot of helping hands. Citizen scientists are a big part of Green’s work.

“We’re trying to promote awareness, promote stewardship and provide educational opportunities for anyone that is willing to help,” Green says. “Anyone can participate.”

U biology students have been using camera traps in Red Butte Canyon, above the University of Utah, since 2012 to track mammal populations. The “traps” don’t trap animals at all. They’re just passive observers, cameras strapped to a tree that take a snapshot whenever an animal crosses into their field of view. From that Red Butte data, the researchers have identified deer, elk, raccoons, coyotes, moose and turkeys living in the canyon. Since Red Butte is undeveloped and relatively undisturbed, it provides a good study laboratory.

But mammals in other Wasatch canyons haven’t been watched as closely. The U.S. Forest Service and Utah Department of Wildlife Resources tracks numbers of moose, deer and elk, Green says.

“And beyond that,” he says, “there are complete data gaps. There’s almost nothing on any other species.”

With his study, he’s hoping to change that. And he’s not doing it alone. He’s partnered with organizations around the state to share data and resources, including the Wild Utah Project, BYU, the Natural History Museum of Utah and Hogle Zoo. The U.S Forest Service and Utah Division of Wildlife Resources have also partnered with Green, as has the Salt Lake City Parks and Public Lands Program. 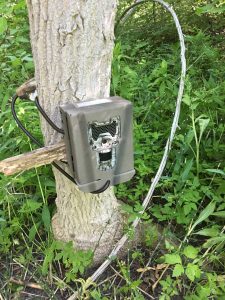 All of these groups are vitally interested in what the camera traps will see. Green has 70 of them, deployed in all the major Salt Lake County canyons, as far east as Park City and as far west as the Jordan River. Each camera is about the size of a thick paperback book and mounted on a tree with a protective casing.

Through trial and error, Green and his fellow biology students have refined the best settings to make sure they’re capturing the right things on the cameras. The trigger is activated by changes in temperature in the camera’s field of view, and after snapping the initial photo, will wait 15 seconds to take another.

To multiply his 70 cameras over 210 sites, Green and a dedicated group of volunteers maintain the cameras and rotate each camera through three sites over the course of the summer. Early in the summer, volunteers set up the cameras at pre-determined sites, checked it after two weeks, and took it down two weeks after that to move the camera to a new site. Volunteers were able to select their preferred camera site locations and the difficulty level of accessing the site. For some volunteers at easily accessible sites, a visit to the camera traps can take an hour. For some, Green says, it’s a full day.

Kait West, a U graduate, is one of Green’s volunteers. She’s a hunter and board member of the Utah chapter of Backcountry Hunters and Anglers, and heard about the project when Green visited their chapter.

“I love recreating on public lands,” she says. “I hike, I hunt, I backcountry ski, I rock climb. What you don’t realize is that is also home to all of this wildlife.”

Her camera trap locations are all in Big Cottonwood Canyon, on the Beartrap Fork and Silver Fork trails. Her camera was stolen while at its second station of the summer (Green says around 10-20 percent of cameras are stolen) but a replacement is now in place.

“Being involved in these types of projects is really beneficial for what I like to do,” says West, an advocate for access and conservation on public lands. “When there’s something we actually care about its’ something worth fighting for.”

Green says that engaging members of the public in this work, and fostering a conservation mindset, helps achieve the project’s goals.

“The biggest thing we need is actual conservation and management strategies to come from this,” he says. “We need this data to be used for something to protect or restore a certain area. If you have stakeholder engagement and then you also have public backing from the community, it makes those choices that the state organizations have to make a lot easier if they know the public’s behind them.”

Although the summer 2018 field season is winding down, the project and the opportunity to join in, are ongoing. Green will still need citizen scientists to help him enter and process the camera data via citizen science websites Zooniverse and eMammal—no hiking required.

There are several ways to join this and other citizen science efforts, Green says: