Two warriors face off in the center of a modern-day gladiator pit enclosed in a 2-inch-thick Lexan encasement, the only barrier between the roaring crowd and the fighters. The excitement builds, momentarily transforming the airplane hangar in Long Beach, California, into the Colosseum of ancient Rome. The combatants charge, propelling their metal masses at their adversary. A red streak traverses the arena like a bloodthirsty Roomba, spinning its 55-pound blade with menace. The mighty robot with a University of Utah logo on its back lives up to its name: Bloodsport. 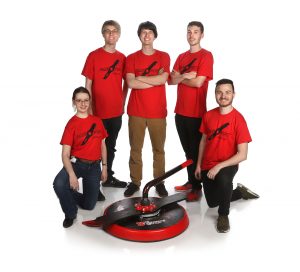 Bloodsport is one of 69 robots featured in the TV show “BattleBots.” Engineers from around the world spend months perfecting their design, then building an efficient killing machine. The teams do multiple fighting rounds, and the one who wins the most matches is declared victorious. Griffin Tabor and Rebecca Miles, two engineering graduate students at the U, and their teammates created Bloodsport. The 250-pound hulk wields a deadly metal spinning blade that whirrs towards its opponents like a possessed helicopter. Bloodsport has already fought two battles, and its third will air on the Discovery Channel on Friday, Aug. 30, at 6 p.m. on streaming and non-cable, 9 p.m. on cable. Watch with the team in the Kennecot Mechanical Engineering building, 1495 E 100 S, Salt Lake City, UT 84112 room 3550 at 6 p.m.

“We had one really drawn out fight where we ripped the guy’s entire front armor off and we won. And then one that just, right away something catastrophic went wrong—we lost our weapon. We were dead in the water,” said Tabor, a doctoral candidate in the School of Computing, robotics track at the U. “We were just screaming at the opponent to hit us some more just for fun because the goal is to make as good TV as possible.”

And they did. Bloodsport flipped 15 feet into the air, and the crowd went wild.

The birth of Bloodsport

Each team is expected to fight at least four times throughout the event. There are 16 total episodes, and each one is two hours long. So far, 11 episodes have aired. 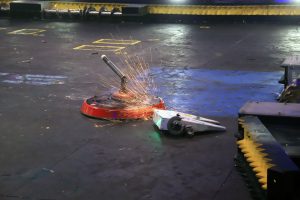 “BattleBots” teams can build whatever their imaginations allow, as long as the total weight is 250 pounds. The teams control their robots remotely, as well as utilize weapons built-in to the arena, called Hazards, to make matches more exciting. There are four hammers on each side of the arena that teammates can use to hit the opponent if it gets too close. There’s also a circular saw that pops up and causes damage.

Bloodsport chose a circular design because there are no obvious weak points; its armor protects every angle of the 32-inch diameter robot and it can attack in any direction with wheels that spin on a dime. The blade is 48-inches long, extending beyond the casing to cause major damage. A doglegged pole sits atop the robot as a way to right itself if it tips over. This robot’s total weight is 247 pounds. They’ve also made a 3-pound small robot to try to tip the opponent off balance. Bloodsport’s resemblance to a lawn mower caused some confusion during the competition.

“An announcer actually made a joke about it. He said, ‘And they raised money for their robot by mowing neighborhood lawns.’ But it didn’t sound like so much of a joke, so I think some people took it seriously,” Miles said. Miles is pursuing a master’s degree in the School of Computing, robotics track. The team funded their robot in part by sponsorships from the U Departments of Mechanical Engineering and Electrical and Computer Engineering, as well as from University of Utah Marketing & Communications.

The six-person team from around the country met while competing against each other in high school robotics competitions. This meant the team mostly interacted online, leaving Miles and their team captain, Justin Marple, to complete the thing on their own.

“You can do as much planning, as much designing as you want but someone has to actually put the hundreds of hours in to physically assemble and test every piece,” Tabor said.

In mid-April of last year, the “BattleBots” teams hauled their monstrosities to Long Beach where the filming took place over two weeks. Damage is inevitable—Bloodsport had two-robots worth of spare parts with them to fix and improve on the fly. Although the competition is stiff, there is great  camaraderie among the teams who just want everyone to have a good time.

“Everyone is super crazy supportive and everyone wants to see everyone else do well,” said Miles. “From the pits on the side of the arena, we all sit together to watch and cheer during each other’s fights.”

Bloodsport is already thinking about how they can improve next year by building 3-pound prototypes and testing them in smaller events around the country.

“We’ve been trying to decide what would work better next year. Like, days’ worth of talking, just chatting with each other like, “Does this shape make more sense?” said Tabor. “We’re trying to look forward for what we can do better next year, with no promise that there is a show next year.”