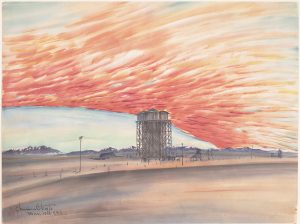 Chiura Obata, a Japanese American artist whose life story is as captivating as his paintings and prints, is the subject of a major retrospective opening Friday, May 25, at the Utah Museum of Fine Arts. The exhibition will be on view through Sunday, Sept. 2.

“Obata’s faith in the power of art, his devotion to preserving the myriad grandeur of what he called ‘Great Nature,’ and his compelling personal story as an immigrant and an American all make Obata and his art as relevant to our contemporary moment as ever,” says ShiPu Wang, exhibition curator and professor of art history and visual culture at the University of California, Merced.

Wang will give a free public talk, “Obata’s Cosmopolitan California,” Thursday, May 24, at 7 p.m. in the museum’s Katherine W. and Ezekiel R. Dumke Jr. Auditorium.

On Thursday, May 31, at 6:30 p.m., Obata’s granddaughter, Kimi Kodani Hill, and other descendants of Japanese American internees will share their families’ experiences in “Topaz: Our Stories,” a free program in the Dumke Auditorium. 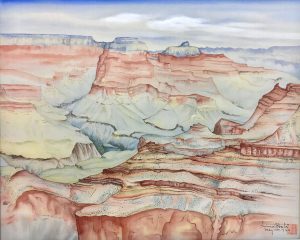 Born in Okayama, Japan, Obata emigrated to the United States in 1903 as a young man. He built a successful career as an artist, working primarily in California, against a backdrop of growing anti-Asian and anti-immigrant sentiment. In 1942 he was an influential art professor at the University of California, Berkeley, when he was sent, with thousands of other Japanese Americans, to the Topaz War Relocation Center near Delta, Utah. He started an art school at Topaz and made paintings and drawings documenting the difficulty of life at the camp and the beauty of the desert landscape around it.

“Visitors familiar with the UMFA’s collection of western and European landscapes will revel in how Obata celebrates the physical beauty of California and the West, including the stark desert around Topaz,” says Luke Kelly, UMFA associate curator of collections and antiquities, who organized the exhibition for Salt Lake City. “His brush makes the bleakest places the most alluring.”

“Chiura Obata: An American Modern” was organized by the Art, Design & Architecture Museum at the University of California, Santa Barbara, where it was on view earlier this year. The exhibition will travel from Salt Lake City to the Okayama Prefectural Museum of Art in Okayama, Japan; the Crocker Art Museum in Sacramento, California; and the Smithsonian American Art Museum in Washington, DC.

Obata’s work can be found in the permanent collections of the Whitney Museum of American Art, the Fine Arts Museums of San Francisco, the Smithsonian, and other institutions. His work was featured prominently in “When Words Weren’t Enough: Works on Paper from Topaz, 1942–1945,” the 2015 inaugural exhibition for the Topaz Museum in Delta.

Generous support for the exhibition was provided by the Terra Foundation for American Art. Utah presenting sponsors are Dr. and Mrs. James Ferguson.

Please visit the UMFA online calendar for other related events, including sumi-e ink painting activities for adults and families, and a community meet-up with the Topaz Museum.